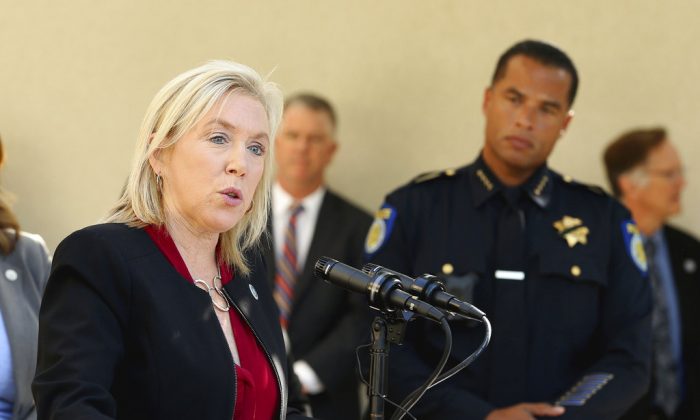 Sacramento County District Attorney: One-Third of Inmates Served Less Than Half of Their Sentences

SCDA Anne Marie Schubert announced on May 26 that she and 43 other elected District Attorneys across California have filed a civil lawsuit against the California Department of Correction and Rehabilitation (CDCR) for awarding additional conduct credits to 76,000 violent and serious offenders without including a traditional regulatory scheme public comment period.

In July, Schubert and a few other District Attorney have also submitted a California Public Records Act request to CDCR to find out how much time Sacramento inmates are serving of their court-ordered sentences between January 2019 to May 17, 2021. The data demonstrate more than 1,300 out of 4,070 inmates served less than half of their sentences.

“We became aware of CDCR releasing inmates significantly shorter than their court-ordered sentence time, sometimes after serving less than 50% of their time, when those individuals were re-arrested while our records showed they should be in prison,”  Schubert in a July 6 statement.

“District Attorney’s Offices across the state have also seen a disturbing trend of individuals given parole consideration long before their court-ordered sentence time.”

The statement added that the U.S. Department of Justice study found a 71 percent recidivism rate among individuals released from prison across 34 states, including California.

Proposition 57, also known as the Public Safety and Rehabilitation Act of 2016, was overwhelmingly approved by California voters to give authority to CDCR to submit regulations to provide additional opportunities for incarcerated people to receive Good Conduct Credit (GCC) for early release. The act aims to incentivize incarcerated people to take responsibility for their own rehabilitation by providing credit-earning opportunities for sustained good behavior.

Schubert said that one of the largest problems with Proposition 57 is that people who are convicted of non-violent felonies can have their sentence drastically reduced, but that the law does not define nonviolent in a way that most people think.

Schubert told The Epoch Times that domestic violence is considered nonviolent and explained: “somebody that goes to prison for beating a woman can get out in a fraction of their sentence.”

“These people earn credits now for not misbehaving, it’s not because they’re doing additional rehabilitation. You’re now releasing them before they’ve had an opportunity of having a meaningful rehabilitation,” Schubert told The Epoch Times.

Schubert suggested that CDCR should have instilled more transparency in the decision-making process and gather public input before implementing any sentencing changes.

Schubert said the proposition takes the role of “ignoring victims’ rights and ignoring the potential consequences for recidivism.”

California Department of Corrections and Rehabilitation spokeswoman Dana Simas told The Epoch Times in an email that the expansion of GCC can help reduce recidivism and make out community safer. She said that this change is meant to “incentivize incarcerated individuals to have sustained good behavior and encourage them to participate in rehabilitative and educational programs to earn additional credits.”

“It’s important to note that the Good Conduct Credit (GCC) emergency regulations are not an early release program, and these changes do not result in the automatic release of any incarcerated individual.”

Simas explained that GCCs will not make an inmate eligible for expedited release, and the recidivism data for those released this year will not be available until approximately 2025 since the data is only gathered by following individuals three years post-release.