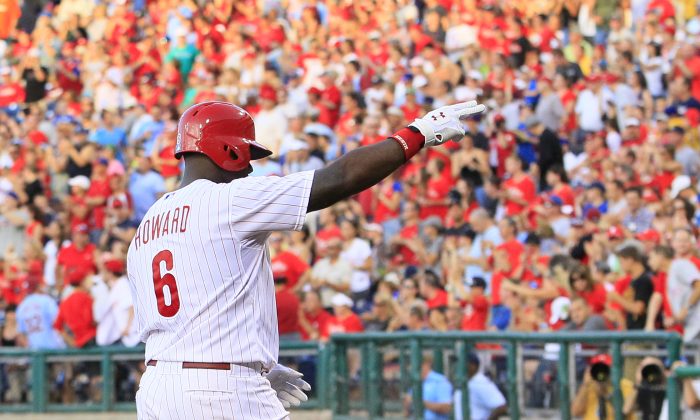 Philadelphia Phillies' Ryan Howard gestures towards the fans after hitting a solo home run during the third inning of a baseball game with the Atlanta Braves, Friday, July 5, 2013, in Philadelphia. The Phillies won 5-4. (AP Photo/Tom Mihalek)
News

One the Ball: Ten Worst Contracts in Baseball

It’s amazing how fast the turnaround can be between signing a player to a long-term contract and then watching that contract become the iceberg—not anchor—to that team’s Titanic. Some, like Ryan Howard’s are immediate.

For purposes of this list, I’ve grouped them into four categories: Good player in a bad contract, injured star, slumping player on a new team, and Alex Rodriguez.

Good Player in a Bad Contract

Here’s a prime example of a great player in a bad contract—Seattle had to overpay to pry him from New York. At $24 million per, he’s not overpaid on a yearly basis, especially given that he’s hitting .332 with 11 home runs while playing a premium position—second base. (Second base, shortstop, catcher, and centerfield are considered the toughest positions to find two-way players for.) But Cano turns 32 this October, meaning he’ll be 40 in the final year of this deal—2023—while still bringing in $24 million.

Cabrera is the reigning two-time AL MVP and heading into this season was the best hitter in the game. But this year his slugging percentage is just .511—worst since 2003—and given the 31-year-old isn’t in the best shape, the future doesn’t look so great. Look at how fast Albert Pujols fell.

Mauer’s deal is what Seattle is hoping to avoid with Cano. When he signed it in 2010, he was coming off his third batting title—no other catcher has even one—and his second straight Gold Glove, while hitting a career-best 28 home runs. But the Twins have since moved into a new, more pitcher-friendly ballpark that’s sapped some of his power, while injuries have forced him to move to first base—not the premium position catcher is. Currently, Mauer is hitting just .275 with 4 home runs.

Sabathia was originally a great signing in 2008 by the Yankees that got them another World Series title. Unfortunately for them, Sabathia put in an opt-out clause after three years, which he then leveraged in 2011 to add another year and roughly $30 million to his contract, in exchange for not becoming a free agent. It’s always risky giving pitchers long-term deals and this one doesn’t look like it’s going to end well as the 34-year-old was ineffective even before landing on the DL with knee problems.

Fielder is shelved for the season (neck surgery) and who knows what he’ll be like when he returns, but the now 30-year-old slugged a career-worst .457 last year and had just 3 home runs in 42 games this season. Though he’s the youngest on this list, at 5 feet 11 inches tall and a whopping 275 pounds Fielder’s career path looks the worst.

This was probably the most puzzling extension ever signed. In 2010, Howard had two years left before he could hit free agency, but the Phillies couldn’t wait so they locked up the big slugger to a five-year, $125 million extension. Through three years of that extension, which started with a torn Achilles, the 34-year-old has hit a total of 43 home runs while striking out 337 times and hitting just .233.

Hamilton has not been the same hitter since coming to the Angels. After hitting .285 with 43 home runs and 128 RBIs in 2012 with the Rangers, he slumped to .250 with 21 home runs and 79 RBIs last season. This year, he has just six home runs through 72 games. Even worse is the deal he signed that has escalating salaries, paying the 33-year-old $25 million next year and then $32 million each of the next two.

It’s hard to believe this contract went this bad this fast. Naturally, signing a 32-year-old to a 10-year deal has been proven to be ridiculous (A-Rod?), but Pujols had finished in the top ten of the MVP voting all 11 years in St. Louis—he’s yet to do so in the American League. Even worse, with escalating salaries, a 41-year-old Pujols will be bringing in $30 million in 2021—the final year of this deal.

It’s amazing how the Rangers had the foresight not to offer too much money to Hamilton, but completely whiffed on Choo. Choo had some power, some speed, and was an on-base machine in his previous stops in Cleveland and Cincinnati, but has displayed neither in Texas. The 32-year-old has just 12 home runs, 3 steals, and a .241 batting average through 119 games with the Rangers this season.

There’s only one A-Rod in the majors, but not for long. Given that he’s just six home runs from the first of five $6 million career milestones, his skills have eroded, he’s old (39), and he’s a PR disaster, it’s a slam-dunk that the Yankees will release him, making the entire remainder a complete loss.