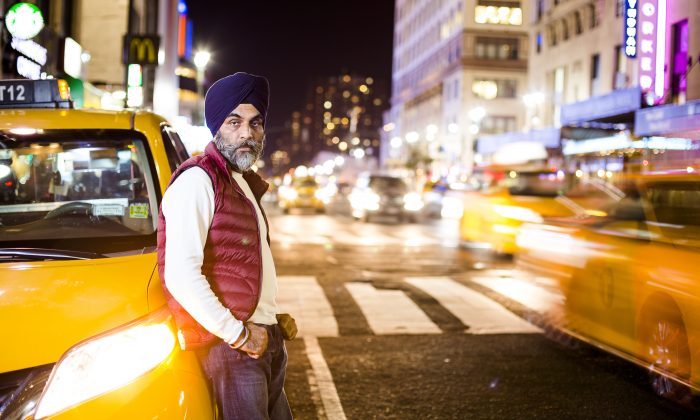 Jaswinder Singh, an individual medallion owner, in Manhattan, New York, on Oct. 7, 2015. Ever since his driver left him for Uber 13 months ago, he has been behind on mortgage payments, and is on the verge of losing his medallion and his house. (Samira Bouaou/Epoch Times)
New York

NEW YORK—The night was teeming with city noises: the intermittent blasts of hip-hop from passing cars, the jubilant howls of young drunkards. But it was dim and quiet inside Jaswinder Singh’s taxi, save for the sound of his children talking to him through FaceTime. Although they live in the same house in Long Island, he hasn’t seen his children in three days.

Seven days a week, Singh drives his yellow taxi from 2:30 in the afternoon until past 11 at night. By the time he gets home from the city, it is 2 a.m. Sometimes he doesn’t make it home until 5 in the morning. His seamed face and gray beard make him look older than his 45 years.

When Singh wakes up his three children are often already at school. His wife hands him his lunch bag, stuffed with painkillers and a vegan meal, and off he goes again.

To stave off loneliness, Singh steals family moments during bathroom breaks or as he waits for passengers at John F. Kennedy International Airport.

As fine needles of rain scattered from a black sky during one recent respite, he texted his wife. She responded with a photo of their 6-year-old son modeling new shoes.

“So nice. So cuteeeee,” Singh wrote back to her.

Singh used to not mind the long hours of solitude. For the last 12 years, his driving had served as a worthy means to a middle-class life: He went from being a bankrupt man in Punjab, India, to becoming someone who owns a house in Long Island. His children attend school in a good neighborhood.

But of late, his efforts feel fruitless.

Ever since his driver left him for Uber 13 months ago, Singh has been pushing the boundaries of his body to save his family’s future.

Despite working seven days a week and sleeping an average of four hours a night, he is three months behind on his medallion mortgage payments. The bank can repossess his medallion at any time.

“Losing the medallion is not so bad,” he said. “The problem is losing the house.” Singh, like many medallion owners, had borrowed against his medallion to help pay for his home.

As the taxi industry staggers to compete with Uber and other app-based ride-hailing companies, much has been written about the setbacks of Medallion Financial Corp. (which provides medallion loans) and fleet owners (those who own several medallions and lease them out in taxi garages).

But few have examined the lives of individual medallion owners like Singh, and how Uber has made the American dream more accessible for some while putting it out of reach for others.

Before the mid-1930s, the New York City taxi industry was unregulated. There was no limit on the number of taxis and no standard on fares.

In 1937, the Haas Act created the medallion system, which required taxi drivers to get a special license and curbed the number of taxis in the city.

It required each taxi to have a medallion, a metal city permit affixed on the hood of the taxi. Without it, a driver is not legally allowed to pick up hailing customers from streets or airports.

(Uber is technically legal in NYC because its drivers can only pick up people who hail from apps.)

Usually, taxi drivers save for many years before making a down payment to purchase their own medallion taxis. They are considered elites in the industry once they do. They no longer need to work for a garage and can even hire a driver to work for them. They can borrow money against the medallion and buy houses.

After five years of taxi driving, Singh saved up enough to make a down payment for a medallion in 2008. The medallion was worth $450,000 at the time.

As the medallion’s worth went up, Singh borrowed against his medallion to pay for his house. With his mortgage, his debt grew to $840,000.

That was fine, and even typical, for some time. His driver paid him $2,000 a month to rent his medallion at night and Singh still drove full time during the day. He earned enough to make mortgage payments, save for his children’s college, and even take one day off a week.

Up until recently, investing in a medallion had been a safe road to the middle class.  For decades, its value had grown exponentially.

Singh was overjoyed the day that he got his taxi license in New York. A switch flipped in his mind; for the first time since his childhood, he felt that the world was his oyster.

Singh grew up in Punjab, a state in northern India with a large agriculture industry. He fancied becoming an attorney as a boy, but his family was not wealthy enough to pay for an overseas law education.

Instead he went on to start a successful export business with his brother. They sold and traded goods of all kinds—from blankets and zippers, to saws and pliers, to rice.

But when China joined the World Trade Organization in 2001, the Indian economy could not compete with China’s cheap manufactured goods.

Singh’s export business, along with many others, went bankrupt.

He remembered the long lines outside the embassy, where people would wait up to eight hours a day in 90-degree weather for a chance to apply for a visa. They couldn’t get out of line to eat or use the bathroom. If they did, they’d lose their spot.

Singh’s visa application was rejected four times. But he kept trying. He’d travel 300 miles each time from Punjab to the embassy in New Delhi.

In the end, he was arranged to marry a woman in Queens, New York.  But he didn’t want to marry her for the sake of leaving India.

He spent more than he could afford on phone cards, having long conversations with his potential wife.

“I had to know if she was beautiful on the inside,” he said.

He realized that she was. In 2003, they married, and he joined his life with hers in Richmond Hill, Queens, where he became a taxi driver like his father-in-law.

His brother-in-law purchased a medallion too, and borrowed against it to purchase a second medallion.

Singh’s nephew also bought a medallion in April 2014. He wasn’t in a position to do so, but the bank offered him a 95 percent loan. At the time, he didn’t suspect that the incredible offer might have been given because the medallion was about to drop in value.

Singh’s driver left him for Uber last September. “At first I didn’t think it was a big deal,” he said. “I’ll just find another driver.”

But drivers left for Uber in droves. At McGuinness Management Corporation, a taxi garage in Brooklyn, 50 percent of its taxis were unused, the New York Post reported this August.

It didn’t help that Singh owned a wheel-chair accessible taxi—which required twice as much gas. When the sparse number of taxi drivers had a sea of cars to choose from, they avoided the wheelchair accessible cars.

Thirteen months later, Singh is still driverless and paying $4,300 a month for his medallion mortgage. His mortgage, gas, car repairs, and insurance come to $7,000 a month.

When asked about the current situation of many individual medallion owners, Tariq looked sorrowful.

One can’t blame Singh’s driver for leaving. The pay and working conditions are much more attractive driving for Uber.

“I drove a yellow taxi for more than 10 years, and it was a constant struggle to make ends meet,” Samuel Nunez, a Uber driver, wrote in an op-ed in the New York post titled “Driving for Uber lets me live the American dream.”

As a yellow cab driver, Nunez earned around $30,000 a year and paid the medallion owner to use his car.

With Uber, he doesn’t need to pay a garage or medallion owner. He drives his own car.

“With Uber, I make about $60,000 a year—and right now, I’m only working three days a week,” he wrote. “We’re no longer stressed about paying the bills and are more focused on spending quality time with one another and doing what we love.”

Mamadou Bah, a Uber driver who emigrated from Guinea, told the Epoch Times a similar story.

“When driving the medallion, I had to drive 12 hours a day,” he said. “Now I can stay home two to three days, and I make more money.

“This is my medallion right here, my $300 medallion,” he joked, patting his car.

A proposed Uber cap was put on hold in City Council in July, as the city moved forward with a traffic congestion study.

In the meantime, Uber has grown to 30,000 drivers in New York City, who compete with 50,000 yellow taxicab drivers.

Some speculate that Uber and other ride-hailing apps such as Lyft, Gett, Via, and so forth, might be the future of taxis.

But Graham Hodges, a professor of history at Colgate University who has written a book about the social history of taxis, doesn’t think so.

“I’m not troubled the medallion has fallen in value,” he said.

Hodges used to drive a yellow cab to support himself during his five years at the City College of New York, where he received his bachelor’s and master’s degrees. Hodges went on to become a distinguished Fulbright professor at Beijing University.

Since the medallion system had been an enduring gateway to the middle class throughout history, he believes it won’t lose value permanently.

“It could be a sign that the medallion is losing value,” Hodges said, “or it could also be a sign that people are holding back and waiting to see what happens.”

But how long will it take for the medallion to rebound? Singh is running out of time.

Singh feels a twinge in the pit of his stomach whenever he remembers how his son doesn’t spend the dollars he receives from his grandparents.

“Someday when I save up a lot of money I will give it to you so that you can take a day off,” he recalled his son saying. But Singh felt that he had no choice but to work even harder.

In April, the bank seized his medallion.

In a fit of panic, he borrowed money from dozens of friends and family in India to come up with the $16,000 he needed to get his medallion back.

But in May 2015, the First Jersey Credit Union sent him a letter saying that since the medallion value has gone down, Singh owed the bank $177,173.

Singh needed to pay within 10 days. Otherwise, the bank would take him to court and he “was liable for legal court costs,” according to the document.

Singh managed to negotiate with the bank and put off the payments.

But by October, he was three months behind on medallion mortgage payments once again. Singh felt demoralized.

He went to the emergency room twice in September for an overwhelming bursting sensation in his stomach.

It turned out Singh has kidney stones. But his main reaction was frustration that he had to go to the hospital on a weekend, when driving was most profitable.

“I’m scared something will happen to him,” said Ruby Singh, his wife. “He’s sleeping only four to five hours. He’s losing his weight.”