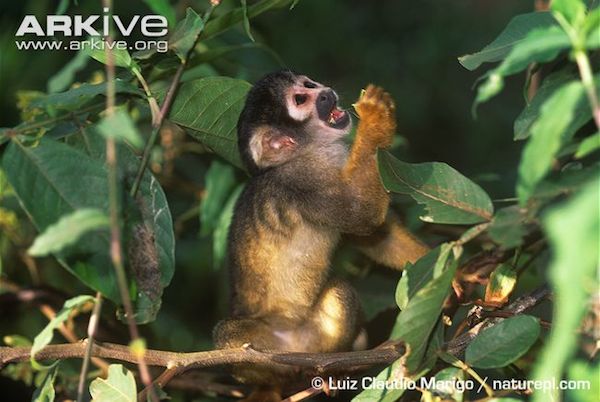 One Subspecies of Squirrel Monkeys In Danger of Extinction

Walking through the Amazon rainforest for the first time is an overwhelming experience, and not in an entirely predictable way. With its incredible biodiversity, several orders of magnitude higher than forests in temperate zones, you can be forgiven for expecting to be surrounded by wildlife vying for your attention, from the small mammals on the forest floor to the hundreds of birds in the dappled canopy.

When you first step into the rainforest, however, it is with some surprise that you realize that despite this incredible density of living things, the forest can appear eerily uninhabited to the unaccustomed eye. In fact, you have to actually search hard for wildlife to see anything at all.

There are only a few creatures that are an exception to this rule, and squirrel monkeys are one of them. Roaming in boisterous groups of up to 150 animals, these small monkeys catch even a novice’s eye and they have a magnetic ability to keep your interest. Watching their inquisitive exploration of the forest, accompanied by the playful antics of adults and their young, is one of the more riveting experiences in a rainforest.

With their sharp black eyes set in a pale face, topped off with a distinct yellow or black cap coming to a point at a widow’s peak, squirrel monkeys are easily distinguished from other primates and can be observed across many forests in South America. That is to say, all but one species – the single exception called Vanzolini’s squirrel monkey (Saimiri vanzolinii).

For many years, particularly after renowned naturalist Philip Hershkovitz of the Field Museum in Chicago published his valuable taxonomy of Neotropical Primates, Saimiri boliviensis was considered to be a mere subspecies of the larger Bolivian squirrel monkey (Saimiri boliviensis). Today, it has the distinction of being one of the most range-restricted primates in all of the Neotropics.

It is only found in 870 square kilometers of the Mamirauá Ecological Reserve in Brazil, and nowhere else on the planet.

Very few forests on earth can claim to be from 7 to 15 meters underwater for over half the year, but Mamirauá is one of them. Spanning 11,240 square kilometers within the Brazilian state of Amazonas, it is bounded by River Japurá in the north and east, and River Solimões in the south.

“Mamirauá is the only conservation unit in Brazil located entirely in várzea flooded forest,” reports José Márcio Ayres, of the Wildlife Conservation Society who has been instrumental in its formation, in his case study on Mamirauá for Wetlands International. The reserve includes over 499 lakes, and experiences an average of a 12-meter difference between low and high water levels through the year. It has stayed relatively stable over the last decade, with a tree cover loss of 3,635 hectares – less than half a percent of its forest – from 2001 through 2012, according to the forest-monitoring site Global Forest Watch. However, there have also been 829 FORMA alerts since 2006 within this area, which is a system that analyses satellite imagery and other factors to generate bi-monthly notifications indicating where new, large-scale forest loss has probably occurred.

This annual flooding has important effects on the distribution of terrestrial wildlife in the area, being suitable only for those species that are skilled swimmers. In the trees, however, arboreal primates do so well that Mamirauá boasts two endemic species (those that are not found anywhere else) – the white uakari (Cacajao calvus calvus) and Vanzolini’s squirrel monkey – as well as six other primate species, including two other subspecies of squirrel monkey (Saimiri sciureus cassiquiarensis and Saimiri sciureus macrodon).

This conglomeration of biodiversity – including 290 fish and 310 bird species – reaffirms Mamirauá’s role as a hotspot for speciation within the genus Saimiri and recent work on the genetics of squirrel monkeys overall has lent further support to this idea. In the January volume of the journal Molecular Phylogenetics and Evolution, Jessica Lynch-Alfaro and colleagues utilized 118 squirrel monkey samples from 68 localities to construct a mitochondrial DNA tree. They discovered that all speciation events occurred between 1.4 and 0.6 million years ago, which predates the last three glacial maxima, eliminating climate extremes as a cause for speciation.

Interestingly, they discovered that Saimiri vanzolinii is not in fact subsumed under Saimiri boliviensis, but instead is a sister species to a eastern population of Saimiri ustus in Rondônia. The study’s results indicated that S. vanzolinii diverged from S. ustus 590 thousand years ago, which is earlier than the formation of the Mamirauá Reserve, about 5 to 15 thousand years ago.

So how did this incredible biodiversity emerge?

Floodplain habitats, say scientists, go through incredible alterations yearly, based on erosion and sedimentation, resulting in the continuous transformation of river ways. Saimiri vanzolinii was likely endemic to a much larger area once, and has now been forced into the tiny region it occupies today, bordered by rivers on all sides.

“It is likely that S. vanzolinii has become restricted to a very small habitat because of the evolution of the floodplain forest ecology over time,” Lynch-Alfaro states in her study, “and it is also likely that all suitable remaining habitat for S. vanzolinii will be rapidly lost because of global climate change in conjunction with the inherent dynamic characteristics of floodplain forest.”

Long-term studies within the reserve also highlight the importance of this habitat for Vanzolini’s Squirrel Monkey. “The distribution of Saimiri vanzolinii,” according to Fernanda Pozzano Paim of the Instituto de Desenvolvimento Sustentável Mamirauá, “constitutes extreme endemism.”

The Mamirauá Reserve has already been selectively logged, with many hardwood trees sold for timber. Mamirauá has 2,100 human inhabitants living in 14 communities that extract resources from the Reserve and participate in its management. Animals that are hunted within the Reserve include the black caiman (Melanosuchus niger) and the manatee (Trichechus inunguis, after whom the reserve is named), both of which are illegally hunted to this day.

One study on the effects of tourism on primate sightings revealed that while some larger primates were rarely observed on high-use trails, Saimiri vanzolinii, listed as Vulnerable by the IUCN, did not appear to be affected by tourism. Scientists have concluded that sightings of Saimiri are sufficiently high, indicating the tourist visitation rates within the reserve are sustainable, but the monkeys still maintain their flight responses when disturbed. Today, the Mamirauá Reserve maintains this delicate balance with careful monitoring, perhaps the only safeguard of the future of Saimiri vanzolinii.

This article was written by Mrinalini Erkenswick Watsa, a correspondent writer for news.mongabay.com. This article is republished with permission, original article here.