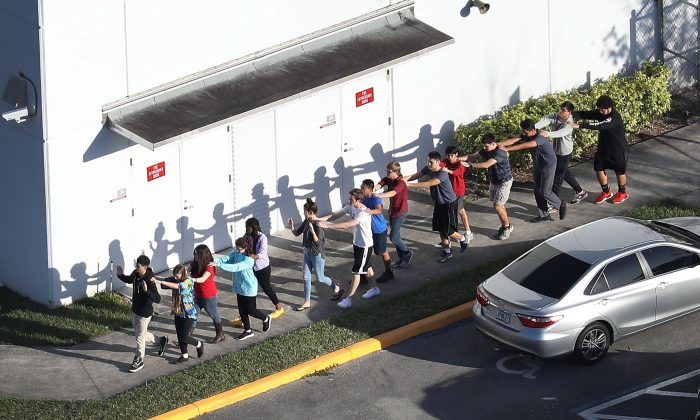 People are brought out of the Marjory Stoneman Douglas High School after a shooting at the school that left 17 people dead February 14, 2018 in Parkland, Florida. (Photo by Joe Raedle/Getty Images)
Crime and Incidents

One Student Texted Parents as Shots Rang Out: ‘If I Don’t Make It, I Love You’

A student at the school where the mass shooting occurred on Wednesday texted her parents to say, “If I don’t make it, I love you.”

The shooting at Majory Stoneman High School in Florida, north of Miami, left 17 dead and others wounded.

The text conversation, published by WSVN, shows a parent texting the student.

The student was identified by a Miami Herald reporter as Sarah Crescitelli.

“If I don’t make it I love you,” Crescitelli says in the text message. “And I appreciate everything you did for me.”

The parent quickly responds. “Don’t talk that way. The cops are all over,” they said.

While hiding in a bathroom for two hours, this is the text Sarah Crescitelli sent her parents. Dad and Mom both crying re-reading it. #stonemanshooting @ pic.twitter.com/zN7RY8a4vE

Another message between a student and their father was published by Miami Herald reporter Carli Teproff, starting with a message from the parent.

The text added that someone had heard gunshots coming from the high school.

“Yeah there was a couple I heard too,” the student replied.

The parent asks if the mother can come to get the child now.

Parent's conversation with -14-year-old son who is currently in lockdown. pic.twitter.com/6M4f0FrbZJ

“It’s not over we are on lockdown. You could get hurt,” the student said.

Another set of messages was published by a woman who said the texts were from her sister.

“There is a shooter on campus. I am not joking. Call 911 please. Send them to Douglas,” the first four messages read.

The woman believes her sister might be joking but the sister insists she is serious. “I am not joking they just shot through the walls someone in my class in injured,” she said.

At one point, the student says, “I’m so scared. Tell [our parents] that I love them so much.”

Footage from inside the school, taken on cell phones, emerged, including some of the students fleeing past dead bodies.

Another showed a SWAT team with guns drawn entering a classroom where students huddled.

Nikolas Cruz, a former student who had been expelled and identified as a threat, was later named by officials as the shooter.

Cruz reportedly tried to blend in with the escaping students but was later apprehended.