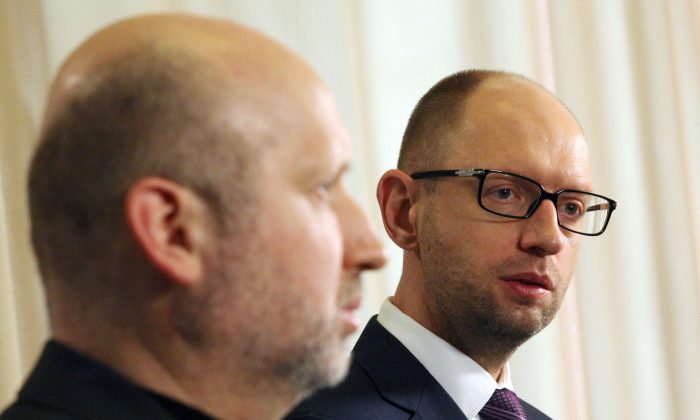 “This is a red alert … this is actually a declaration of war against my country.”

On Sunday Ukrainian Prime Minister Arseniy Yatseniuk set the record straight. This is not a local rebellion, not simply an act of aggressive intimidation. Russian troops have invaded the sovereign territory of Ukraine and are rapidly occupying strongholds in the south and east of the country.

We have not seen as blatant an act of international criminality in the heartland of Europe since the Soviet Union invaded Czechoslovakia in 1968 at the height of the Cold War. More sinisterly, it is becoming obvious that this invasion is a well-planned military takeover of an independent state.

The masks are coming off: those unidentified “snipers” who shot and killed innocent Ukrainian protesters in Independence Square are now being identified as Russian; the so called “partisans” who occupied public buildings last week in Crimea are now obviously elite troops of the Russian army. Russian regulars are moving over the border in great numbers, in violation of every principle of modern diplomacy.

It is clear that having failed in its attempt to rule Ukraine by stealth, the Russian military invasion will create a de facto zone of influence in key areas of Ukraine (at the very least). Anders Fogh Rasmussen, NATO’s secretary-general, said that Russian “activities” in Ukraine “violate the principles of the U.N. charter. It threatens peace and security in Europe. Russia must stop its military activities and its threats.”

But what United Nations principles are Vladimir Putin’s armies violating?

The United Nations materialized from the necessities of war. In 1944, the (soon-to-be) victorious Allied Powers (including the Soviet Union) gave birth to the idea of a postwar transnational security institution. It was intended to insure the collective security of Europe (and the world) after the horrors of the second world war. There was a strong consensus about the role of the United Nations during the war, which unfortunately unraveled rapidly with the rise of the Cold War.

The principle of state sovereignty was simple, at least in theory. This principle determined that the “sovereign” (legally independent) state would be the foundational unit of the new world order. In other words countries (and not empires) were to be the legal entities for national political organization. But however simple it sounded, state sovereignty was difficult to define in practice, because at the end of the war so many state boundaries had moved, shifted or been defined by violent aggression. The legal boundaries did not necessarily reflect ethnic realities.

The principle of nonintervention was also simple in theory. No state could invade the territory of another sovereign state unless there was a compelling humanitarian need. If, for instance, a state was systematically waging a war of genocide on an ethic group, then intervention could be justified. But proof of the violation needed to be proven and action approved by the Security Council in order to protect the primacy of state sovereignty.

The third principle, self-determination is perhaps the most problematic, for this principle obviously overlaps and in certain circumstances contradicts the primacy of state sovereignty. If, for example, an ethic minority were being systemically disadvantaged culturally, denied access to resources or abused politically they could, in theory, separate from the sovereign state. This kind of action was discouraged, but was allowed under the charter of the United Nations.

Every one of these principles is being violated by Russia’s invasion of Ukraine.

The stated goal of the Russian invasion was to “secure the rights and cultural integrity of Ukraine’s Russian-speaking minority.” This invokes the principle of self-determination.

There is some logic to this position. The Crimean peninsula is only very distantly Ukrainian. Khrushchev transferred the Crimean region to the Ukraine in 1954 for administrative reasons. Crimea’s history is Russian, its culture and language are Russian, and as far as one can tell in the fog of war, Crimeans are not entirely unhappy with recent events.

But this fact alone is not justification for military invasion. The Russians have every right to champion for the rights of Ukraine’s Russian minorities and, if there is evidence of genocide or other gross violations of human rights, it could take action to protect those ethic minorities. However, in order to justify intervention, Russian would need to prove these allegations before the Security Council and gain its approval for its military action.

The fact that Russia has not made the case for intervention, and feels no need to do so, speaks to the real principles behind this invasion. For Vladimir Putin, the principles of the United Nations no longer apply; might makes right. The Russians can and will—if unopposed—seize control over the sovereign state of Ukraine as a demonstration of Russian power and ruthlessness.

If Putin’s new doctrine-of-power is followed to its logical conclusion Viktor Yanukovych, the deposed Ukrainian prime minister, will—with the help of his Russian friends—make a triumphant return to Kyiv and depose the unelected mob of criminals who occupy his rightful authority.

And the world will be one step closer to World War III.

Robert McGarvey is an economic historian and co-founder of the Genuine Wealth Institute, an Alberta-based think tank dedicated to helping businesses, communities, and nations build communities of wellbeing. Robert is the author of “The Creative Revolution” a historical guide to the future of capitalism. Copyright www.troymedia.com