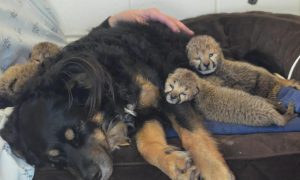 The Edinburgh Zoo is celebrating the arrival of an adorable striped and spotted Malaysian tapir calf. Born on May 19th, the baby came into the world weighing about 24 pounds, but he won’t stay that small for long. Experts anticipate his size will double in the coming weeks, and before long the animal will tip the scales at over 500 pounds.

As the Malaysian tapir grows, he will lose his striking markings, as they are intended only as a temporary means of extra protection through camouflage.

For now, the little guy is still learning the basics, like walking, and stays rather close to his mother. When the calf is older, he will become part of European Endangered Species Breeding Programme, and help keep the increasingly rare species from disappearing entirely.