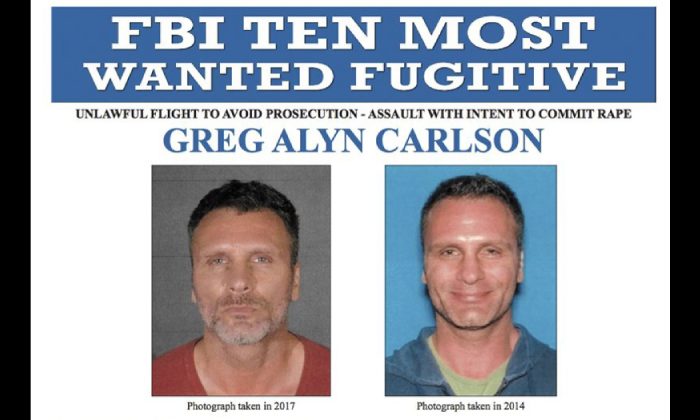 The FBI tracked a man they think was one of the country’s Ten Most Wanted Fugitives to a North Carolina motel, where agents shot and killed him on Feb. 13.

The armed suspect was shot to death at a motel in the Raleigh suburb of Apex will be identified by state medical examiners but was believed to be 47-year-old Greg Alyn Carlson, the FBI’s North Carolina office said in a news release. Authorities said he was wanted in connection with multiple armed sexual assaults including a burglary and sexual assault in Los Angeles last fall.

An FBI spokeswoman did not respond to messages asking whether the man exchanged gunfire with agents. Apex Police Capt. Mitch McKinney said his officers were contacted after the FBI raid to secure the scene. He said he had no information about the shooting.

“Agents approached the room and tried to take Carlson into custody. Following an altercation over a gun, Carlson was shot to death by FBI agents,” Paul Delacourt, assistant director of the FBI’s Los Angeles office, said in a press conference.

Carlson, who the agency said had been linked by DNA to sexual assaults dating back to 2003, had previously been tracked to South Carolina, Alabama and Florida, the FBI said.

Authorities say Carlson committed a burglary on July 13, 2017, during which he attempted to sexually assault a woman while using a weapon.

In September, he was charged with assault with intent to commit rape, assault with a deadly weapon and burglary, and he was arrested by Los Angeles police.

Carlson posted bond and was released, then fled to Mount Pleasant, South Carolina. The FBI said investigators believe he then left the state in a car with a stolen gun and a significant amount of cash.

He was spotted in Hoover, Alabama, on Nov. 22 and led police on a high-speed chase, but officers called off the pursuit because of danger to the public.

Carlson was then spotted in Florida, first in Jacksonville on Nov. 28 and in Daytona Beach two days after that.

In another case of criminals running from law enforcement, MMA fighter Cedric Joseph Marks, suspected in two murders, escaped from a prison van near Houston on Feb. 4.

Cedric Joseph Marks escaped from the van Sunday morning when guards with the Texas Prisoner Transportation Service stopped at a McDonald’s in Conroe, about 40 miles north of Houston. Two guards in the van were transporting 10 prisoners, the Conroe Police Department said in a statement.

Cedric Marks was taken into custody after a nine-hour manhunt involving multiple law enforcement agencies, Montgomery County sheriff’s Lt. Scott Spencer said in a tweet Sunday evening. Marks was found hiding in a trash can and surrendered without incident, Conroe police said on their Facebook page.

Police and the company have not commented on why the van stopped at the fast-food restaurant or how Marks escaped. Authorities have said the 44-year-old middleweight fighter was wearing leg, hand, and belly restraints when he managed to flee.

No guards or other prisoners were injured in the escape, Conroe police Lt. Dorcy McGinnis said Monday.

The search for Marks narrowed after surveillance video showed him near a business in Conroe, McGinnis said. He was found hiding in a trash can in a residential neighborhood less than a mile from the restaurant around 4:45 p.m.—about nine hours after he escaped.

A person who answered a phone number listed for Texas Prisoner Transportation Service said Monday that no one was available to comment on the escape. The private company says on its website that all its transportation specialists have a minimum of two years’ experience in law enforcement, corrections or the military, and that the company treats all detainees “as maximum security.”

It is not clear which state or local authority contracted the company to transport Marks and the other prisoners.

Marks was being held Monday in the Bell County Jail on charges including capital murder, burglary and violating a protective order, according to online jail records.

He is suspected in the killings last month of his ex-girlfriend, Jenna Scott, and Scott’s friend, Michael Swearingin, in the Central Texas city of Temple. Both disappeared on Jan. 4. Their bodies were found Jan. 15 buried in a shallow grave in Clearview, Oklahoma.