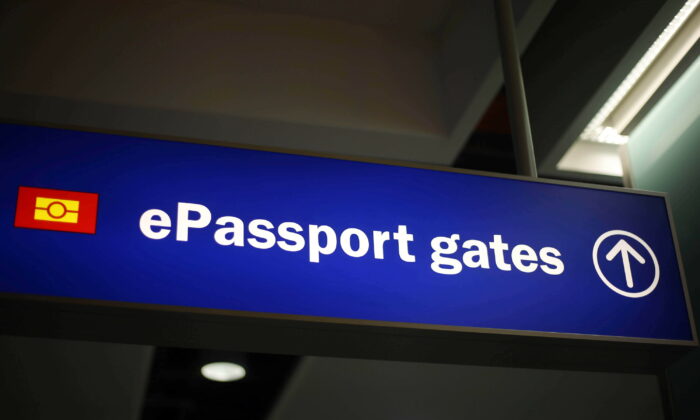 Undated photo of signage for passport gates at an airport. (Steve Parsons/PA)
UK

A British fugitive wanted for alleged drugs and firearms offences has been arrested at Lisbon Airport when trying to enter Portugal with a fraudulent passport.

The National Crime Agency (NCA) described Alex Male, 29, as “one of the UK’s most wanted men.”

He was detained at Lisbon Airport on April 30, having just arrived on a flight from Turkey, where he had been refused entry a few hours earlier after Turkish border police noticed the document.

Male is believed to have used encrypted communications platform EncroChat to distribute class A drugs such as cocaine and ketamine across southwest UK.

He is also accused of money laundering and conspiring to acquire a firearm as part of his drug dealing activity between April and June 2020.

Male was added to the NCA’s Most Wanted appeal in January after he went on the run following his arrest by the South West Regional Organised Crime Unit (SW ROCU) as part of Operation Venetic, a UK law enforcement operation targeting organised crime groups.

He was previously on the run in the Marbella area of Spain before moving to Portugal.

NCA International Liaison Officer Phil Robinson said that he was “delighted” the fugitive had been caught, adding that Male’s alleged “dangerous crimes” had “a devastating impact on communities.”

Robinson said: “Male naively believed he could travel across international borders using fraudulent documentation and remain undetected by law enforcement. But he underestimated the vigilance and expertise of the Turkish border police, which enabled the Portuguese authorities to act.”

He said that the NCA will “continue to work with our international partners to close the net around fugitives, no matter where they are.”

Detective Inspector Adrian Hawkins, from the SW ROCU, said: “The arrest of Alex Male brings an end to a long period of investigation taking place in the UK and across Europe.

“Male will now be returned to the Criminal Justice System in the UK to face the charges he ran away from. This is an example of international law enforcement working together to ensure justice can be done and demonstrating there is nowhere safe to hide.”

Male remains in custody in Portugal and will now face extradition proceedings.