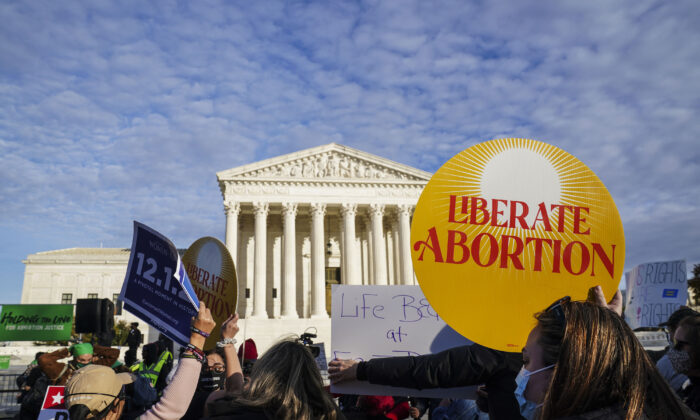 Participants hold signs during the march "Hold The Line For Abortion Justice" at the U.S. Supreme Court in Washington on Dec. 1, 2021. (Leigh Vogel/Getty Images for Women's March Inc)
Viewpoints

Roe v. Wade, the Supreme Court’s 1973 decision invalidating most state abortion restrictions, is undoubtedly one of the worst and most poorly reasoned decisions, legally speaking, that the high court has ever handed down.

On Dec. 1 the court heard oral argument in Dobbs v. Jackson Women’s Health Organization, involving a Mississippi law that flies in the face of Roe and bans nearly all abortions after the 15th week of pregnancy. The Dobbs case gives the Supreme Court, now dominated by six conservative justices with apparent strong belief in the absurdity of Roe and strong desire to protect unborn human life, a chance to send Roe to the dustbin forever.

But the odds are—unfortunately—that it won’t. Because the Supreme Court has historically been reluctant to overturn even the most appallingly erroneous of its decisions.

The late Justice Harry Blackmun, author of the 7–2 majority opinion in Roe, claimed to locate a “fundamental” constitutional right to an abortion—nowhere to be found in the language of the Constitution—in the “penumbras” of various provisions of the Bill of Rights that he said protect a woman’s right to “privacy” regarding her decision to procreate. He then neatly divided the nine months of pregnancy into three “trimesters,” and declared that states could not legislate to protect the life of the unborn child until the third trimester, the seventh month or around 27 weeks, when the fetus could survive outside the womb. Even then, Blackmun wrote, a medical judgment that the mother’s life or health might be at risk would override any state restriction or ban—which shredded even the modest protections that states might offer the unborn during the last three months until birth.

Roe v. Wade became an object of ridicule as soon as its ink dried. Some of its fiercest critics were liberal legal scholars who supported widening women’s access to abortion but objected to the crude and overbearing reasoning in Blackmun’s majority opinion and his arbitrary trimester approach to abortion. One was Ruth Bader Ginsburg, later to become a Supreme Court justice herself.

In 1985 she wrote, “Heavy-handed judicial intervention was difficult to justify and appears to have provoked, not resolved, conflict.”

The famously progressive Harvard Law School professor Laurence Tribe wrote in 1973, within months of the Supreme Court’s ruling, “One of the most curious things about Roe is that, behind its own verbal smokescreen, the substantive judgment on which it rests is nowhere to be found.”

Lawyer Edward Lazarus, who served as Blackmun’s law clerk during the 1980s, wrote, “As a matter of constitutional interpretation and judicial method, Roe borders on the indefensible.”

Indefensible it may be, but Roe stands to have a long afterlife, thanks to an ironclad principle that the Supreme Court has abided by nearly relentlessly: “stare decisis,” whose Latin translates as “to stand by the things that have been decided.”

By the early 1990s Roe was out of date, medically speaking. Premature babies born earlier than 27 weeks routinely survived—right now the typical survival age is 23 or 24 weeks and sometimes as early as 21 weeks, or in one recent case, 19. In 1992 the Supreme Court, in a sharply divided decision in Planned Parenthood v. Casey, jettisoned Blackmun’s rigid trimester system in favor of a flexible standard that allowed states to regulate and, in some cases, ban abortion after viability. The court also allowed abortion restrictions before viability as long as they don’t create an “undue burden” on women seeking abortions. Finally, the justices quietly dropped Blackmun’s penumbral privacy rationale in favor of a right to “liberty” that it defined as “the right to define one’s own concept of existence, of meaning, of the universe, and of the mystery of human life.”

But there’s one thing that the Casey court did not do: overturn Roe v. Wade itself. “The woman’s right to terminate her pregnancy before viability is the most central principle of Roe v. Wade,” the court said. “It is a rule of law and a component of liberty we cannot renounce.”

The idea behind stare decisis, which dates at least back to medieval times, is that the law demands stability and predictability. People rely on laws, including judges’ decisions, to make their own decisions about how to act, so you can’t have courts deciding an issue one way this year and another way the next.

There are only a few grounds that courts, including the Supreme Court, have recognized to overturn their own precedents: a drastically changed situation, for example, that renders the earlier decision unworkable. David Schultz, a law professor at the University of Minnesota and author of a forthcoming book about the Supreme Court’s use of precedent, points out that from 1789 to 2020, the high court handed down 25,544 opinions and judgments after oral argument. Of those, it reversed its own constitutional precedents only 145 times.

The classic example of a horrifyingly bad precedent—that the Supreme Court let stand for 58 years—was Plessy v. Ferguson. In this 1896 decision the justices ruled 8–1 that Southern “separate but equal” regimes for separating blacks from whites in public facilities satisfied the 14th Amendment’s requirement of equal protection under the law. Only one justice, John Marshall Harlan, recognized the obvious: that stigmatizing blacks by forcing them to ride separate railroad cars was itself a violation of equal protection. It wasn’t until 1954, with Brown v. Board of Education, involving segregated public schools, that the Supreme Court overturned Plessy. And that was only after civil-rights lawyers managed to “prove” that schools for black children under segregated regimes at the time were in fact educationally inferior to schools for white children. What if the opposite had been the case? We might still be living with Plessy.

And if the defenders of unrestricted abortion—who include the Biden administration’s Justice Department—have their way, we’ll still be living with Roe, which is only 48 years old right now. In a telling moment during oral argument in the Dobbs case, Justice Samuel Alito asked President Joe Biden’s solicitor general, Elizabeth Prelogar, if a Supreme Court decision could be overruled “simply because it was erroneously wrong, even if nothing has changed between the time of that decision and the time when the Court is called upon to consider whether it should be overruled?” Prelogar’s answer was “no.” If enough Supreme Court justices agree with her, one of the court’s worst decisions will be with us for a very long time.