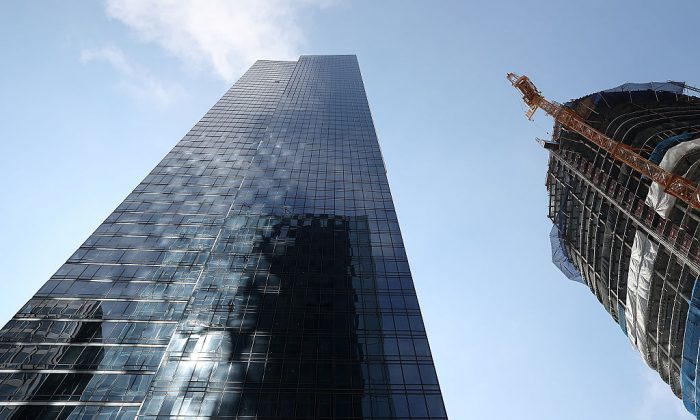 San Francisco’s fourth largest skyscraper is sinking and tipping and residents are worried of impending disaster.

The 645-foot Millennium Tower started to have problems soon after its foundation was laid in 2006. It had sunk over 8 inches by the time building was complete, in 2009. The luxury skyscraper was one of the earliest to dot San Francisco’s financial district. At the time. Regulations were minimal, as the San Francisco administration was simply unaccustomed to such tall buildings. But early assumptions have come back to haunt the city and the building’s developers.

“We didn’t have anything in place from a regulatory perspective on how to deal with buildings of this nature,” Chief Building Inspector Ronald Tom, of San Francisco’s Department of Building Inspection, said in a New York Times article.

The skyscraper has sunk 17 inches and tilted 14 inches. Residents were only told there was a problem last year. They had already paid anywhere up to $10 million for condominiums in the skyscraper. Former San Francisco NFL quarterback Joe Montana can be counted among its residents. Now more and more residents are bringing lawsuits to try and save their investments. About 20 residents are taking legal action because, as the skyscraper tips, the value of their homes goes down. Some residents have already lost money selling their condos, fearing losing even more money if they wait.

“We don’t know if this building’s going to stand up in an earthquake,” said former resident Frank Jernigan to “60 Minutes.” “And so I became severely frightened of that.”

“We sold it for approximately half of what it was valued at before this news came to light,” added Jernigan.

The building is in danger because it was not founded on bedrock, like the soon-to-be tallest building under construction next door, but sits on landfill. It doesn’t help that the building is constructed with a heavier concrete frame. It was built to regulation, but those regulations weren’t thorough enough. The building is supposedly still safe to live in, but a growing number of people are concerned that isn’t the case.

The ground in the San Francisco Bay area is built from debris left after the 1906 earthquake, along with dredged soil. It’s not as stable as what buildings in New York City rest atop of, according to The New York Times.

Cracks are visible throughout the basement of the building’s rapidly eroding future. San Francisco now relies on outside engineers to help ensure local authorities can interpret data for the safety of the growing cityscape.