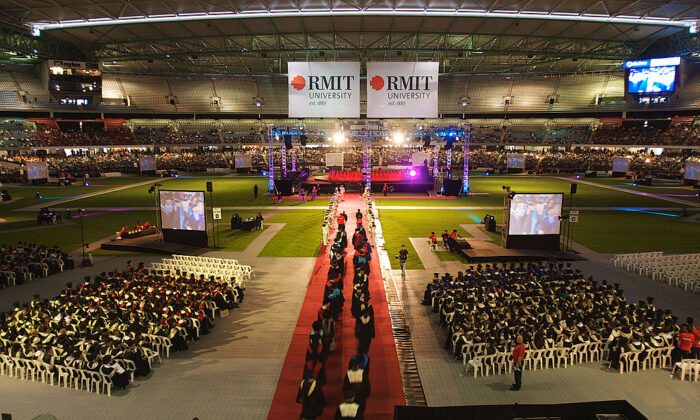 One of Australia’s most prestigious universities, RMIT University in Melbourne, has been accused of significant and systemic wage theft by the National Tertiary Education Union (NTEU). The union alleged hundreds of casual academic staff were affected over several years.

In a media release on Sept. 20, the NTEO said according to its calculations, RMIT allegedly underpaid hundreds of academic casual staff over $17 million (US$12.36 million), and noted it had requested that Wage Inspectorate Victoria investigate whether RMIT’s alleged underpayment of staff amounted to criminal wage theft under Victoria’s new wage theft legislation.

An RMIT spokesperson told The Epoch Times that the university is “committed to ensuring that employees receive their full entitlements and is continuing to review details of the evidence provided.

However, the university refused to give further comment on NTEU’s allegations.

“If ever RMIT is provided with evidence to suggest that any employee may not have been correctly paid, it will investigate the matter,” the spokesperson said.

“In instances when an error may have inadvertently occurred, RMIT would, of course, rectify the error.”

The union’s latest legal action against RMIT comes after it took the university to the Fair Work Commission in 2020 over new marking rates, which limited tutors to 10 minutes to grade an assessment, half of the previous time allocation.

The accusations of wage theft followed in June 2021 when the NTEU alleged the entirety of RMIT’s 16 academic schools failed to pay the correct marking rate for academic judgment to casual academic employees.

In July, the union provided an evidence “brief” consisting of materials implicating 10 of RMIT’s schools in academic judgment wage theft to the university.

According to a report by The Age, RMIT’s enterprise agreement in 2018 and 2014 stated casual staff must be paid an extra 25 percent, where academic judgment is exercised in marking assessments, employees’ payslips showed that the university paid casual staff the “standard marking rate,” which was $10 to $20 an hour less than the “academic judgment” rate required.

In an update to members on Sep. 3, NTEU said RMIT had initially refused to meet with the rank-and-file and only consented to 10 members attending the meeting between the two parties.

The union also noted that after hearing the accounts of casual staff who were affected by the underpayments, RMIT said it “was not in a position to have further discussions” on the issue until they had conferred with the Fair Work Ombudsman, which had been in contact with the university about the wage theft allegations.

NTEU has proposed a resolution that calls for RMIT to pay back wages for affected staff, correct policies regarding casual marking rates, and apologise to casual academic employees.

Since the beginning of the union’s campaign, a number of individual members have won thousands of dollars in back pay.

In June, RMIT Chief People Officer Megan Marshall stated that she “would be shocked and very disappointed if such behaviours were to actually arise,” adding that the university treated the allegations as “a very serious matter.”

“Wage theft in our universities is not a one-off scandal, but an ingrained crisis. And its most powerful ingredient is the insecure work inflicted on university workers through short-term contracts and casual employment.”

According to a report by the ABC on Aug. 18, 10 of Australia’s 39 public universities are repaying wages, conducting audits, or are in dispute with casual academic employees over underpayments.

RMIT suffered the greatest deficit among Australian universities last year, reporting that it was $55.93 million in the red.