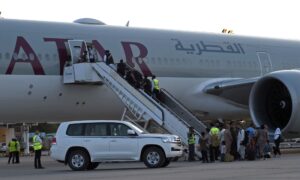 In a six-month signature campaign that spanned the globe, over 1 million people are sending a message to the Chinese regime to end its persecution of Falun Gong before the Olympics kick off next month. A symbolic stack of the petitions collected from 127 countries were presented to U.S. Congressman Dana Rohrabacher (R-Calif.), at a large-scale rally held on July 18 on Capitol Hill.

Rohrabacher said that President Bush’s decision to attend the opening ceremony of the Beijing Games is “sending the exactly the wrong message” to the Chinese leadership.

The petition was launched in January by the Coalition to Investigate the Persecution of Falun Gong (CIPFG), an organization comprised of non-Falun Gong practitioners from society’s elite including lawmakers, lawyers, doctors, journalists, celebrities and other VIPs. Among the petition’s 1,080,100 signatories so far (the deadline for collection is July 20) are over 800 representatives of various levels of government. The final results will be presented to the U.N., the European Union and Parliament, and well-known human rights organizations.

When CIPFG North American chair and human rights lawyer Dr. Clive Ansley delivered the token selection of signatures, he complained that the mainstream media continues to ignore what he calls the “greatest human rights abuse and atrocity since the Nazi holocaust,” particularly referring to the Chinese regime’s crime of harvesting and selling organs from Falun Gong prisoners.

Other speakers blamed the world community for its silence on the issue.

“For no other country, does the international community quietly stand by tolerate such blatant and systematic violations of treaty obligations as that committed by the Chinese Communist Party,” said Erin Weston, government relations coordinator of the Jubilee Campaign USA.

The rally was held to mark the ninth anniversary of the persecution of Falun Gong in mainland China and brought together speakers from 14 human rights organizations, including Freedom House and Amnesty International (AI), as well as five members of Congress.

With only three weeks left before the Olympic Games begin many speakers presented evidence that the human rights situation in China is actually worse today than it was in 2001 when Beijing won the games and is worsening still as the games approach.

Congresswoman Ileana Ros-Lehtinen from Florida called “unbelievable” the document obtained by AI which revealed a November 2007 directive from Chinese Public Security Minister Zhou Yongkang, to “strike hard” at home and abroad against “hostile forces … such ethnic separatists, religious extremists, violent terrorists and ‘heretical organizations’ like the Falun Gong who carry out destabilizing activities.”