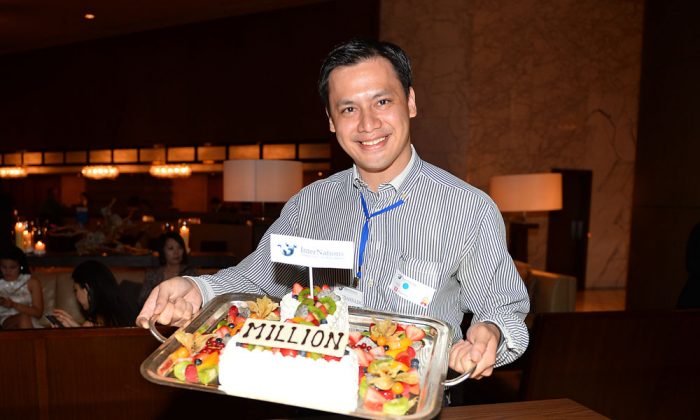 One Million Member Milestone for InterNations

Munich based InterNations expatriate networking was established just six years ago, and now has members in 390 cities around the globe. It has recently recorded its one millionth member. To celebrate this milestone, special celebratory networking evenings were arranged in key cities around the world including Milan, Hong Kong, Boston, Dubai and of course Munich.

The celebration event in Hong Kong on Friday Oct 25 was held in the lobby lounge at the 5-star Renaissance Harbour View Hotel, with 380 members registered to attend.

Peter, a New Zealander, has lived in the beautiful Italian city of Verona for the last 32 years, but moved to Hong Kong a year ago. He is in fashion brands marketing, and explained to the Epoch Times what these events are about.

“I don’t think they [the members] come here for business contacts, they come mainly for the social gathering.

“Three hundred people attending the networking evenings, which are held nearly every week in Hong Kong is normal. I come just to meet people and to get to know more local and foreign people. I have met some wonderful local people,” Peter explained.

Craig who is in telecommunications has been a member for about three years. He works mainly between Hong Kong and Dubai and does a lot of international travel. Craig related some of his experiences with InterNations to the Epoch Times.

“I think InterNations has been exceptionally good for meeting people who are expats, like minded, travel a fair bit, and it’s an opportunity to network and develop business. So, generally it has been quite useful.”

When asked about the number of people attending InterNations in the Middle East he replied: “In Dubai [the numbers were] quite similar, easily over 100.” This was his first time attending the event in Hong Kong.

The atmosphere at the Renaissance Harbour View Hotel was chatty, friendly and informal, and attracted expatriates of all nationalities. The first few people we met came from Spain, Italy, the Caribbean, Greece, the US and the UK, some had only just arrived in Hong Kong.

James a Director of a Greek Shipping Group, originates from Athens. He has spent the last 17 years in the UK, and had just arrived in Hong Kong to establish a maritime business.

“I was in the Caribbean for the last month, in Panama, and I got a program to visit Hong Kong so I looked on the Internet websites, and I joined as a Basic Member just three days ago.

“I just hope to meet some other expats from a social viewpoint. Because my business is very special, there are few people that are like us. I have already been invited to a brunch on Sunday by some of the members,” he enthused.

In his spare time he likes to search for art galleries, particularly traditional or contemporary Chinese arts.

Will Bedoucha, the volunteer organiser and Ambassador of the events, began doing InterNations in January 2010.

“Just then we had about 1500 people in our InterNations community, today we have 16,700 in Hong Kong,” he explained to the Epoch Times.

“We are 20 per cent local and 80 per cent expats at today’s gathering. InterNations is the largest expat network, and it is by invitation only. You need to be invited by someone or approved by someone from Head Quarters in Munich, Germany.

“When I first joined we had events for 60-70 people, today every event is 300-400. This is very tough, doing a day job and running InterNations for this many people almost on a weekly basis is a very big challenge—and is all voluntary.

Will summarised the situation worldwide.

“Because we are based in so many different cities, every community around the world has an InterNations network that they can go to. It has become the very first place where expats who are new in town will actually come to meet friends, to meet people from all around the world, whether for professional, social or other purposes.

“InterNation itself is for profit, but all of us around the world we are running these events on a non-profit basis to bring people from around the world together. My inspiration to do InterNations was more for my father who is here and speaks 11 languages. I wanted a place where he is able to practice all the different languages that he knows.”

The Challenge of Running Networking Events in Hong Kong

Hong Kong is a very vibrant city where business and society depends on networking. Will set out some of the difficulties in running a networking organisation.

“There are over 10,000 different associations and societies around HK and everyone does networking events. We are pretty proud that we run the largest regular networking events in HK, bar none,” Will commented.

Venues for events with three or four hundred people in HK are limited to either hotels or the largest night clubs.

But the benefits of running networking events are satisfying.

“From the people you meet and the friendships that have been garnered, a lot of people have met their best friends, some people very new to town did not know anybody. And InterNations brings friendships together. It’s the kind of place you can let your guard down a little, relax and just meet people and you can see the atmosphere here it is really buzzing,” Will concluded.