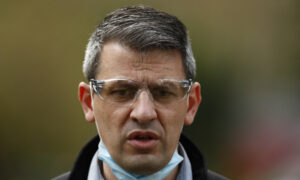 Victoria Police 'Stretched for Resources' Due to Melbourne Towers Lockdown
0 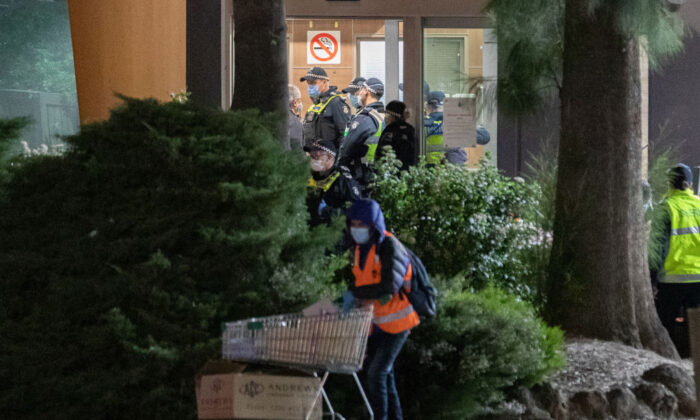 Police are seen in the foyer of the public housing flat at 33 Alfred Street in North Melbourne, which had 53 confirmed cases—about 11 percent of all residents in that tower on July 9, 2020 in Melbourne, Australia. (Asanka Ratnayake/Getty Images)
Australia

One Melbourne Tower Stays in Lockdown

Residents of one Melbourne public housing tower will remain in hard lockdown for another nine days, with fears a quarter of them could have coronavirus.

“We need to recognise that there might be 20 to 25 percent of individuals in that particular tower who end up developing coronavirus and potentially more,” Professor Sutton said on Thursday.

“So that has, much like an aged care facility, been designated as everyone requiring quarantine.”

Residents in the tower will only be able to leave their apartments for medical care and supervised daily exercise.

The government has faced criticism for suddenly putting nine public housing towers in Flemington and North Melbourne into a hard lockdown on Saturday.

Authorities were concerned the high density “vertical cruise ships” had the “explosive potential” to spread COVID-19.

Some residents said that made them feel like prisoners, unable to leave their apartments for five days.

There were also problems with the delivery of food and supplies to residents.

About 2515 residents have been tested for the virus across the towers over five days.

There are about 3000 residents in the towers, but children were tested only if a parent returned a positive test.

Residents at 9 Pampas St and 159 Melrose Street, North Melbourne, joined the rest of the city in stage three lockdown at 5 p.m. on Thursday after no cases of coronavirus were recorded in either tower.

The remaining six towers will end hard lockdown at 11.59 p.m. on Thursday after 105 cases were detected among them.

People in the towers who test positive, or are a close contact of someone who does, will be given the option of moving to a hotel for their quarantine period.

She said a police presence would remain at the towers to ensure public safety.

People can only leave their homes for food and supplies, receive or provide care, exercise, and study or work.

Police can issue on-the-spot fines of up to $1652 to individuals and $9913 to businesses if they flout the rules.

Some 96,000 checks were done by police but only nine people received fines.

Prof Sutton said the restrictions were necessary because of the “sharp increases” in new cases, including 165 on Thursday—the second-highest daily total for Victoria.

Just 30 of the state’s new cases are linked to known outbreaks, with 135 under investigation.

Six of the new cases are linked to an outbreak at Al-Taqwa College in Truganina, which has become the state’s biggest cluster at 113 people.

The first case at the school was identified on June 27, with more than 2000 students and hundreds of staff sent into quarantine.

There is also a link between the school and the public housing towers, Sutton confirmed.

“It is just a link, it might have gone in one direction or the other direction. There might be multiple importations into the towers or into Al-Taqwa College,” he said, noting families have connections to the school.

Previously, an outbreak at the Cedar Meats abattoir had the notoriety of being the state’s largest coronavirus outbreak, with 111 people infected.

Meanwhile, two healthcare workers at Sunshine Hospital and two at the Royal Melbourne Hospital have also tested positive, with contact tracing under way.

Another staff member at Northern Hospital in Epping has also contracted the virus, taking the total to 11.

It’s the fourth day of new cases in the triple digits, with the state’s overall total now 3098. More than 900 cases are active.

To date, 22 Victorians have died of the virus.