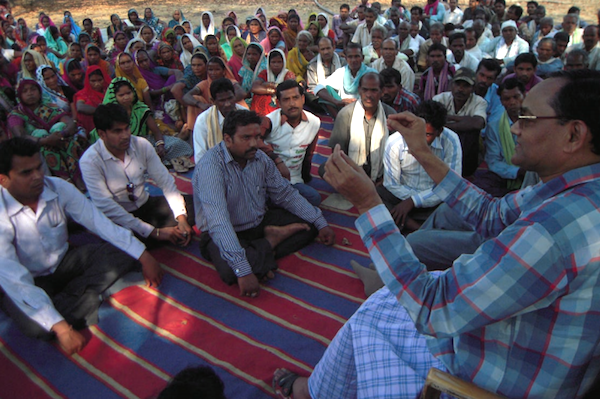 This week, the Goldman Environmental Prize was awarded to six grassroots environmentalists from around the world in honor of their achievements. Of these, Ramesh Agrawal was chosen as this year’s winner for the Prize’s Asian region. For many years, he has worked to spread awareness of the environmental repercussions of India’s coal industry to local residents, empowering them with information and speaking out on their behalf. In 2012, his tireless efforts shut down development of a major coal mine, which would have been the largest in the state of Chhattisgarh (see interview below).

India is a country of rapid growth in terms of both population and economy, requiring ever-increasing amounts of energy. Coal is its most abundant fossil fuel, with an estimated total of 293,497 million metric tons of reserve remaining throughout the subcontinent. Beginning in 1774, coal mining has sought to supply the energy needs of the country. In the late 1970s, annual production reached 100 million metric tons, and has surged ever since. Today, nearly 700 million tons of coal is mined in India every year, making it the third-largest coal producer in the world.

However, there are downsides to what India deems “progress.” Mounting public health concerns, displacement of human communities, and environmental degradation are commonplace in areas surrounding coal mines. Air is filled with haze, and air pollution-related diseases are on the rise. A study published in 2013 estimated that, every year, 397,000 people in India die from conditions directly attributable to air pollution. Coal mining also pollutes waterways, and causes deforestation of the country’s already-reduced wild areas.

Not all of India’s coal pollution stays in India. Once mined, the coal is transported to power plants where it is combusted to produce electricity. The emissions from this process contain, among other things, high levels of mercury, which are transported around the world by atmospheric circulation patterns. This mercury eventually precipitates out of the air as rain or snow, much of which ends up in the ocean and accumulates up the food chain, resulting in high mercury levels in many predatory fish and whale populations around the world—and in the people who eat them.

India’s government is known to operate hand-in-hand with the coal industry, allowing it to bypass thorough environmental impact analyses in order to get coal mines and power plants up and running as quickly as possible. Residents of communities in areas affected by coal development are often denied access to information about proposed energy projects, their land appropriated without fair compensation, and their water and air contaminated with toxic mining byproducts.

India’s Right to Information Act (RTI) of 2002 guarantees access to governmental information, allowing individuals to make informed decisions and report legislative misconduct. However, many people in India are illiterate, which makes it difficult if not impossible for them to access critical information. Agrawal, a former social worker, realized that more people needed better access to information, as well as someone to speak for them and their interests. In response to this need, he founded Jan Chethana, a grassroots movement headquartered in a small internet café in his hometown of Raigarh, in the state of Chhattisgarh.

Jan Chethana acted as a watchdog for Chhattisgarh’s rural communities. Agrawal took it upon himself to educate their residents about environmental violations and file RTI applications on their behalf. He encouraged residents to voice their opposition to threatening industry development and helped them file petitions against it.

Jan Chethana’s greatest triumph came in April, 2012, when Agrawal and area residents succeeded in halting development of a new coal mine. Proposed by Jindal Steel and Power Limited (JSPL), the new mine was slated to be the biggest mine in the state and produce more than four million tons of coal annually. Starting in 2008, Agrawal organized residents to demonstrate their opposition to mine. Eventually, the permits allowing JSPL to break ground were revoked by government agencies, citing the many violations Agrawal had reported.

A few months later, Agrawal was shot by gunmen allegedly hired by JSPL to kill him. He survived, but with a shattered femur. Still, he remains undaunted, and plans to continue his work as the voice for those who are underrepresented by the government and overexploited by industry.

This article was originally written and published by Morgan Erickson-Davis, a contributing writer for news.mongabay.com. Please click HERE for the original story and more information.