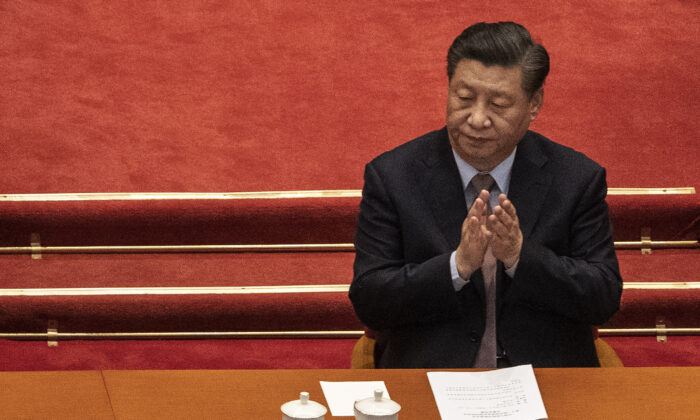 Chinese leader Xi Jinping applauds during the opening session of the Chinese People's Political Consultative Conference at the Great Hall of the People in Beijing on March 4, 2021. (Kevin Frayer/Getty Images)
Thinking About China

In Xi Jinping’s comprehensive dictatorship in China, is the world witnessing the emergence of Mao Zedong 2.0?

It certainly appears so.

Recall that Mao was the founder of communist China, and his rule was marked by failed economic policies, social oppression and chaos, communist party purges, and famines and death on an industrial scale. This was the reality from the revolution in 1949 through the Cultural Revolution he waged from 1966 until his death in 1976.

The post-Mao Chinese Communist Party (CCP) wisely concluded that one-man rule wasn’t a good idea. From 1976 to 2012, China was ruled by a committee with a rotating leadership, which, by design, was deliberative and mostly cautious, though still oppressive.

Then, in March 2013, Xi triumphed over powerful Party members Bo Xilai and Sun Zhengcai—both now imprisoned—as well as other formidable contenders, to become premier. In 2018, Xi was able to change the constitution and become China’s dictator-for-life. It’s no coincidence that Xi is a big admirer of Mao and believes that Mao’s vision of the Party structure was the right one.

That doesn’t bode well for China—or the world.

Like Mao in the mid-20th century, Xi has personalized his rule over China by assuming control over virtually every aspect of the country. That’s incredibly dangerous.

Policies that were once made by committee and consensus across the entire state apparatus are now largely determined by one person. No human being can possibly make the right decisions consistently across all bureaucratic disciplines—from internal security to national security, financial and farming policies, foreign policy, industrial policy, and all the rest.

One of the fundamental aspects of one-man rule is that everything becomes personal. Every policy decision, every political statement, every success, and—most worrisome—every failure redounds back to the man at the top.

At least, it should.

But one-man rule tends to grow unstable and capricious over time, as decision-making expertise, insights, and checks and balances are stifled, and contradictory viewpoints are viewed as treason. The primary objective of one-man rule soon becomes holding on to power at any and all costs, not the development and betterment of the nation or even the Party.

Grave Mistakes Are Being Made

Such dictatorships leave ample room for grave mistakes, and Xi is making plenty of them.

Just a couple of recent examples include halting the importation of Australian coal, upon which China’s power grid and manufacturing sector rely heavily. The aim was to punish Australia for demanding an explanation regarding the origins of the CCP virus and joining the alliance with the UK and the United States.

The results have backfired on the Chinese people and the economy, leading to rolling power outages across major cities, as well as factory stoppages. This has caused a slowdown in both the export economy and domestic consumption, as well as water shortages. Falling gross domestic product figures (as inflated as they most certainly are) and plunging consumer sentiment have resulted in rising personal savings rates and less domestic consumption.

The collapsing real estate sector is also a direct result of Xi’s governance over the past eight years. Millions of citizens have lost substantial sums of money or even their life savings in China’s unraveling real estate market. Essentially, Xi’s mistakes have led to slowdowns in the two main engines of growth in the Chinese economy, leading to enormous pressures within the CCP and in the country as a whole.

But dictatorships have no correction mechanism. Any correction would imply that Xi is fallible and that his failures are hurting the country.

Which Party member will dare to criticize Xi for his failures? He’s surrounded by yes-men.

Only those who wish to be stripped of their wealth or sent to prison—or worse—would do so. This fear-borne groupthink dynamic only leads to more failures and more denials of reality. The endemic corruption and graft that saturates China’s financial system are viewed as the problem—but Xi knows of no other way to run the country.

Under the dictatorship of Xi, every member of the CCP knows that holding on to power in China demands ruling by brutality and fear. The heads of critics must roll, no matter how rich, politically connected, or famous (for example, Jack Ma of Alibaba) they may be.

The truth of a mistake or the condition of the country must either be hidden or deflected from the absolute ruler and reassigned to “somebody else.” And as Bo Xilai can tell you, that “somebody” must be severely punished for their sins.

But worse, as internal failures continue to mount, so, too, do the chances for an external event, such as an invasion into Taiwan or an attack on foreign naval forces. Unlike Mao, who conjured up domestic enemies to help him hold on to power, Xi now has the West and Taiwan to blame. An external threat, real or imagined, may become necessary in order to divert people’s attention from the country’s problems. It also sparks the fires of nationalism and anti-U.S. or anti-Western feelings.

Such an event certainly could, and likely would lead to a wider conflict.

It’s important to understand that Xi isn’t plowing any new ground as the dictator of China, nor is his kind of rule even rare. The second decade of the 20th century saw many dictators emerge in major industrialized nations. Hitler is the obvious one, but there were also Mussolini in Italy, Stalin in Soviet Russia, and Tojo in Japan.

Just as importantly, the political labels that each of these monsters used made absolutely zero difference in their actions. All of them committed heinous crimes against their own people, minorities, and those of other nations on their way to ushering in the start of World War II.

Sadly, a century later, we’re seeing a similar scenario play out in the world today. Even George Soros sees the danger that Xi poses to the world. But like many dictators before him, it seems likely that regardless of the consequences, Xi will do whatever it takes to maintain his grip on absolute power.