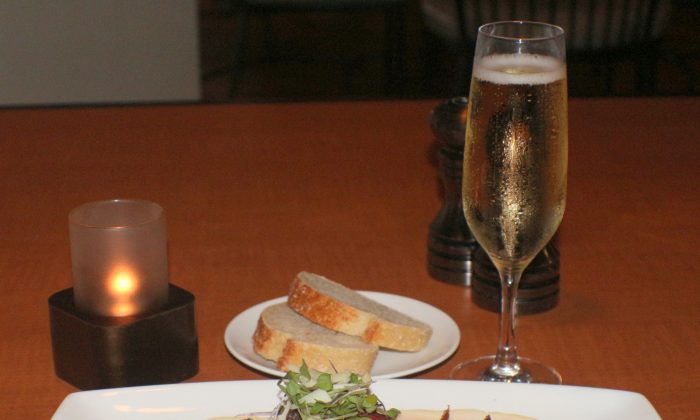 Serrano ham with almond crusted dates. It tastes as delicious as it looks. A specialty on One Lincoln Restaurant's charcuterie plate. (Myriam Moran copyright 2014)
News

“It is Lincoln’s Gettysburg Address. The wall paper was custom made,” Server Camille Horton explained. In the midst of a brutal Civil War President Abraham Lincoln took a long train ride from Washington to this rural farming hamlet to deliver ‘a few appropriate remarks’ on November 19, 1863. It took him about two minutes. The world has never stopped reciting his inspired message that dedicated a military cemetery. The battle five months earlier left 8,000 dead among 51,000 casualties. It was one of the bloodiest battles in a war pitting American against American.

While the war continued for two more years, it was here at Gettysburg, Pennsylvania, in its peaceful orchards, wheat fields and sloping hills, that the fate of the nation was decided. General Robert E. Lee hoped for a dramatic victory. He took his army across the Potomac River in a deep thrust into northern territory. The South had been largely victorious in early battles. General Lee was a strategist. He knew that the largely agricultural South could not prevail against the Union. The northern industrial might, unlimited supplies and virtually unlimited supply of manpower would lead to victory.

‘Mr. Lincoln’s war,’ as opponents in the northern states termed it, was becoming unpopular. There were draft riots. Northerners owned slaves and many had little sympathy for the cause of abolition. If the South could prevail, perhaps capture the Pennsylvania capital at Harrisburg, then peacemakers could bring a victorious South to negotiations and hope for settlement with honor, preserving secession.

It was not to be. Union soldiers were fighting on their own soil for their own land. Pennsylvanians rose up, soldiers defended their soil. General Lee ordered the charge across a mile of open fields against Union cannon and musket fire. The bravery on both sides is chronicled by Pickett’s Charge. Death and disaster reined down. Lee’s army, while not defeated, lost the battle and retreated back across the Potomac. Hope for victory in the northland vanished. The little town of Gettysburg was left with dead and wounded. Thousands of dead horses and mules were dragged into piles and burned. Dead soldiers were hastily buried in shallow graves. Wounded from both sides were treated in field hospitals.

Barely five months after the Battle of Gettysburg a care worn president jotted down his notes. Longer speeches at the dedication of a cemetery for honored war dead were forgotten even as they were spoken. President Lincoln’s Gettysburg Address lives as testimony to courage, idealism and hope. His handwritten words inspire diners in the new One Lincoln. It is the restaurant of the Gettysburg Hotel at One Lincoln Square, directly across the street from where President Lincoln stayed.

Executive Chef Joseph Holmes grew up in a home as one of nine children. His first job at fourteen was down the street from where he lived in Cleremont, NH bar tending. He worked for the Waterford Hotel in Connecticut. “I opened lots of restaurants. I started my own in Jacksonville, Florida in 1984, then moved to Tampa. “I interviewed with Mr. Moran in February. He told me later that he figured, ‘I’ll give this guy five minutes.’ The interview lasted an hour. The drive took me eight hours to get there and eight hours back,” Chef Joseph smiled. He got the job.

The stately Gettysburg Hotel opened in 1797. It was recently bought by Gettysburg College. A management company was installed to run the hotel and restaurant. “I got here in February and we opened in March. I did all the menus, the kitchen. We redesigned the restaurant,” Chef Joseph explained.

Just as the handwritten Gettysburg Address decorates the wall above, a beige painted bottom sets off the room. A fireplace on a wall divides the restaurant. A collection of shiny copper pots and pans herald the other. Modern wood grain, wide board flooring augments tables with dark wood borders. Flickering candles on each table add to the ambiance. Colored and patterned linen napkins folded around silver service grace the setting.

“We retained the classic bar and have live music on Tuesdays and Thursdays,” Chuck Moran, Gettysburg Hotel’s General Manager said. A chef himself for many years, he understands the importance of good food, fairly priced, that will attract locals as well as guests and visitors to Gettysburg.

One Lincoln’s wine list is uncomplicated and complete. Varietal house wines are $6.50 the glass. Select white wines like Sean Minor Chardonnay from California run $9 a glass or $34 the bottle. Domaine Bel Air Pouilly Fume Sauvignon Blanc from the Loire Valley in France is $52 the bottle. Pinot Noir lovers will find Soter Vineyards from Oregon at $68 the bottle. Sparkling wines and Champagnes include Marquis de la Tour from France, $32. Dom Perignon is $225 the bottle.

One Lincoln’s dinner menu starters include Maryland crab macaroni and cheese, $9. The lobster risotto with cold water lobster, wild mushrooms and manchego cheese is $10. A seafood cocktail of poached shrimp and lump crab meat with remoulade spicy sauce is $12.

While the menus for luncheon and dinner offer light fare like burgers, chicken and tuna wraps, the charcuterie plate at $13.50 includes one of Chef Joseph’s favorites, Serrano ham. “It is aged eighteen months longer than proscuitto. I serve it with almond crusted dates, micro greens and coconut. Just a sprinkle of olive oil.” With all the artistry of a master chef, Joseph poured just the right amount of the finest virgin olive oil that added savor to the dish. Hot sliced hard bread was ready to soak up the flavor.

Pan seared basil crusted halibut served on top of manchego polenta was firm and delicious. The fish melted with savory taste on the palate. “The challenge is pricing halibut. It costs $35 to $40 a pound market price,” Chef Joseph explained. Despite its expense, a good sized dinner portion runs $30. Duck salad comes to table with sweet fig vinaigrette, thin sliced sweet potatoes, fried leeks and micro greens. The dish is flavored with gorgonzola cheese and spiced pecans.

Of the duck salad, Chef Joseph says, “The duck salad is good but the extra spicy pecans adds special flavor. Even our shrimp cocktail, instead of the usual sauce, we serve it with three sauces.”

A pause with rectangles of watermelon, the plate dotted with balsamic vinaigrette, refreshed the palate for the next course. The plate was exorbitant and glorious in its presentation. Crab stuffed day boat scallops with rockfish succotash, $28. The taste was as delicious and savory as the dish was eye appealing.

“I come in at 5 AM. Every so often I get to play. This is my relaxation when I go off the menu,” Chef Joseph said. His presentation at table was extraordinary. One Lincoln caters 60 weddings a year and is called on to cater off site. It is clear that there are no limits to Chef Joseph Holmes’ creativity in the kitchen. His rack of lamb crusted with coriander and a gratin of gruyere served with vegetables and a demi-glace of figs is delicious at $34.

“I have two boys, 13 and 15. Christopher is a vegetarian right now,” Chef Joseph said. No doubt his talents in the kitchen also bring flavorful dishes to his table at home.

Desserts run $6.50 and include carrot cake with cream cheese between layers and a very tasty chocolate cake. Desserts are prepared by One Lincoln’s pastry chef. Service is affable and overseen by Restaurant Manager William O’Hop.

“I’m here working all the time. If people go home having had a memorable meal, that is my satisfaction,” Chef Joseph Holmes said. The food at One Lincoln at the Gettysburg Hotel is as inspirational for the palate as Lincoln’s words are to the spirit.

For more information and to make reservations visit their website at www.hotelgettysburg.com or call them at 717 337 2000. The Hotel Gettysburg is located right in the center of town at One Lincoln Square, Gettysburg, PA 17325.