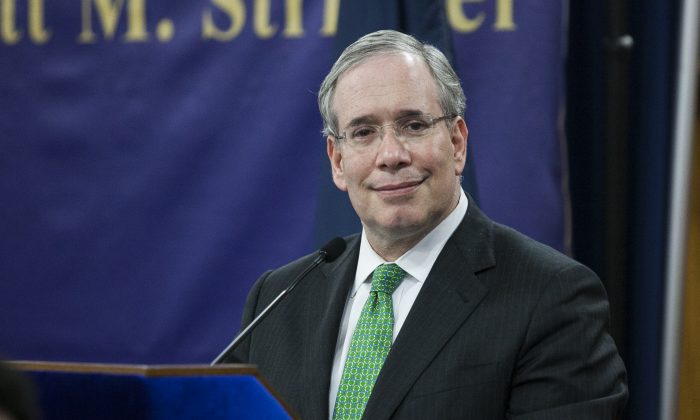 New York City Comptroller Scott Stringer at Mount Carmel Baptist Church in Far Rockaway, N.Y., May 20. A report released Wednesday by Stringer's office indicates that every third school was over 100 percent of its capacity according to 2012 data. (Samira Bouaou/Epoch Times)
New York

One in Three Schools Overcrowded

NEW YORK—Looking at a recent rent bill or a mortgage payment, one could easily tell space in New York City is getting increasingly precious. Highlighting a decades-old problem, more than one in three city public schools is, likewise, short of space, according to a report released Wednesday by the city Comptroller Scott Stringer. And despite massive investments relief is nowhere in sight.

While every third school was over 100 percent of its capacity, one in eight crossed the line by more than 25 percent, the report indicates from 2012 data. In five extreme cases, schools housed almost twice as many students than the city’s Education Department recommends, like in P. S. 319 in Brooklyn, where 186 students were stuffed in a building designed for 78.

Six schools exceeded their capacity by more than 1,000 children. The number of such schools dropped to four this year, but the most glaring example, popular Francis Lewis High School in Queens, still serves almost 4,100 teens in a building for 2,400.

To fix the overcrowding, the city needed over 18,000 more school seats in 2012, the report concludes. And the administration is “committed to aggressively working to combat” the problem, according to Schools Chancellor Carmen Fariña’s response to the report.

Mayor Bill de Blasios’s capital plan funnels almost $13 billion towards some 40,000 new school seats by 2019. But that’s barely enough to cover about 40,000 more seats the city will need by 2018, according to enrollment projections the city received five years ago.

And that doesn’t take into account some 8,000 students receiving instruction in corrugated iron trailers, sometimes moldy and leaking, that the administration vowed to remove. The city plans to spend $480 million to close the trailers, over 200 of them. Where will the children seated in them go is not clear though.