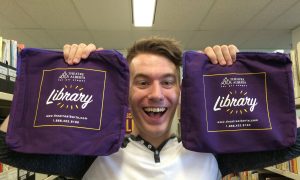 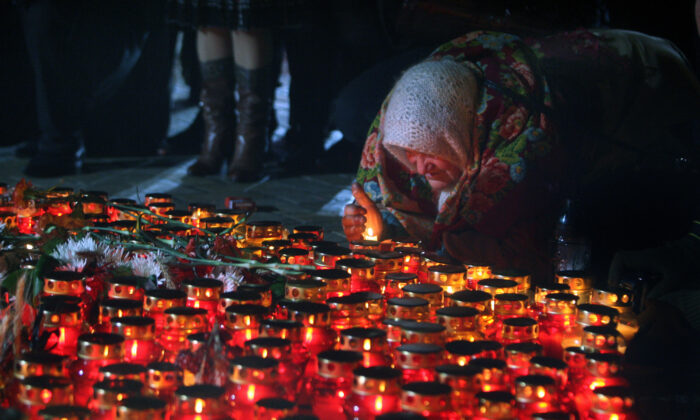 A woman kneels to light a candle during a mass memorial meeting at the Holodomor victims monument in Kiev, 24 Nov. 2007. (Sergei Supinsky/AFP via Getty Images)
Viewpoints

One Hundred Years of De-platforming

I recently picked up and was quickly hooked by “Not Seeing Red: American Librarianship and the Soviet Union (1917–1960),” a 2002 book by Stephen Karetzky. Sure, the topic sounds esoteric, but in this era of “de-platforming” and social media censorship, it’s hotly relevant.

Lauded by Paul Hollander and M. Stanton Evans, this is a book that might turn out to be a sort of early history of de-platforming and its enablers.

Tackling decades of what we might call collusion between American librarians and the Soviet Union, pairing guardians of the free exchange of ideas with jailers and banishers of non-Marxist ideas, “Not Seeing Red” opens with an overview of nonpartisan librarianship in pre-Revolutionary Russia and its tragic transformation into repressive “Communist librarianship” under Lenin and his wife Krupskaya.

What may surprise readers is the flourishing nature of the old Czarist public library system and its adherence to principles of nonpartisan book selection and other library activities. After Lenin came to power, this would all be lost in the “nationalization” of public and private libraries (read: seizure) by the Bolsheviks.

On considering this very Marxist drive to control thought and gain power, then, we may be looking back on 100 years of de-platforming. And I haven’t even read very far into the U.S. side of the story. In fact, I had to stop reading to report on a painful irony I discovered about the history of my own used copy of the Karetzky book.

In a nutshell, “Not Seeing Red” seems to do for U.S. librarianship something at least somewhat akin to what “American Betrayal” does for the federal government, news media, and wider culture: That is, expose Soviet and pro-communist links and perfidies.

To wit: Whereas The New York Times is infamous for Walter Duranty’s Pulitzer-Prize-winning cover-up of the Ukraine Terror Famine, Karetzky makes plain that Library Journal should be infamous for publishing an unceasing stream of disinformation about Soviet libraries and the fate of freedom of speech therein.

“In the first decade after the Bolshevik putsch, the premier American periodical in the profession, Library Journal, provided its readers with numerous editorials, news items, and articles on library developments in the USSR. The overwhelming thrust of these was that much progress was being made in the Soviet Union, that a great social and political experiment was proceeding nicely, and that American librarians should assist their beleaguered, idealistic colleagues there with food as well as materials … There was no indication that the communist regime was in any way responsible for the disastrous economic and social conditions that beset these librarians. Similarly, there was no mentions of the fact that a totalitarian regime was destroying a progressive library profession and perverting the institutions in which it had been based.

“The person most responsible for this misleading campaign was the journal’s editor and publisher, Richard R. Bowker. …”

All hail the founding father of Soviet propaganda in U.S. library-dom. Throughout the 1920s, Karetzky writes (and details) how Bowker “used his editorial pages to support the communist regime.”

The author goes on to describe an article Library Journal carried in 1924 about two important librarians of the day on their return from three months in the USSR. This pair hailed from the second-largest library in the United States after the Library of Congress, The New York Public Library: Harry M. Lydenberg, then head of the Reference Division and later library director, and Dr. Avrahm Yarmolinsky, chief of the library’s Slavonic division between 1918 and 1955.

The 1924 Library Journal article was, Karetzky writes, “highly favorable to the new communist system.” (Bonus: It referred to librarians in eastern Europe as “our fellow workers.”) There was no mention, Karetzky notes, of the “widespread destruction of libraries and their collections, the confiscation of private libraries open to the public, and the massive purging of library shelves” underway at the time.

The Library Journal whitewash couldn’t be clearer than in this declaration: “The world of learning will be glad to know that the public libraries throughout Russia have not suffered during these these years, suffered physically, that is to say. Their collections are intact.”

No, to say the least, they were not, and things only got worse.

Karetzky reveals that Lydenberg and Yarmolinsky both were more critical of the Soviet dictatorship in private.

“For some reason,” Karetzky writes about Lydenberg, “this very productive author and internationally esteemed librarian never wrote an article or gave a speech presenting his impressions of Soviet libraries and society.”

“Never” is a long time, especially for someone who racked up more than four decades at The New York Public Library, also serving at the Library of Congress, the American Library Association, and its board on international relations. Lydenberg died in 1960.

Yarmolinksy did write two article strongly critical of the repressive nature of the Soviet Union in 1925. However, he added nothing for the rest of his life, Karetzky writes, except for a “pedestrian” half-pager on wartime library conditions in the USSR in 1944. Yarmolinsky died in 1975.

It was around this point in my reading that I noticed that my used copy of the book carried a stamp across the top of it.

Withdrawn from The New York Public Library? But surely they had other copies of this highly original book on hand? I went online to see if I could find a copy listed in its catalog. Here’s what I found:

Perhaps there’s a perfectly good explanation for why, amid the 53 million items The New York Public Library boasts of in its holdings, there is not one inch of shelf space for this groundbreaking history of the library profession’s apologetics on behalf of the most repressive and murderous government censors the world has ever known.

I just can’t think of it.