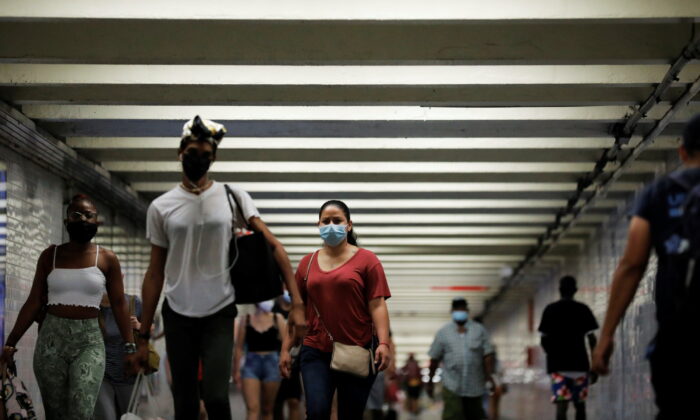 People wear masks as they pass through a pedestrian subway as cases of the infectious coronavirus Delta variant continue to rise in New York City, New York, on July 26, 2021. (Andrew Kelly/Reuters)
NY News

A new study has concluded that over one fourth of commuters who frequently used the New York City subway system prior to the CCP (Chinese Communist Party) virus pandemic may never return, threatening funding for the troubled transit system and forcing managers to consider rate hikes to compensate for the budgetary shortfalls.

A new analysis by consulting firm McKinsey & Co. predicted that ridership of the Metropolitan Transit Authority (MTA) subway system in New York City would likely rise to only 74 percent of pre-pandemic rates by late 2024, down from a previous prediction for 86 percent ridership for the same period. The study also forecasted that system-wide ridership would remain at 80 percent of pre-pandemic levels into late 2026.

Currently, subway ridership is at 61 percent of 2019 levels, though it has nearly recovered to pre-panemic levels in some working class neighborhoods. However, in downtown Manhattan and other central locations, including many upper and middle class neighborhoods, ridership remains highly depressed. Whereas the MTA saw about 5.5 million rides on an average weekday in 2019, that number is currently closer to 3 million daily rides—threatening the MTA’s ability to generate sufficient revenue to sustain its operations.

There are numerous factors contributing to the current decline in subway ridership.

As crime has risen in recent years and some continue to fear being infected with the CCP virus, many commuters are fearful and distrustful of the subway system, causing them to stay off the rails even as the pandemic subsides.

Crime has risen drastically since the beginning of the virus, with robberies increasing by 71 percent in the period from April 2021 and April 2022, accompanied by well-publicized incidents of violent assault and incidents of hate crime against Asian-Americans, leaving many commuters feeling unsafe in the subway system.

Exacerbating this issue is the newfound prevalence of remote work opportunities, which has left many urban professionals who formerly relied on transit to commute to work not needing to use the subway at all, or commuting to work only a few days every week.

The loss in commuter traffic threatens the revenue stream of the New York MTA, which already finds itself facing funding shortfalls as pandemic-era funding comes to an end. Federal pandemic relief funds are expected to be depleted by 2025, leaving the MTA system with a deficit of $2.5 billion on account of reduced ridership.

Without a major change in the system’s income stream, the MTA may have to make drastic cuts to the city’s subway service, inconveniencing the workers who live farther from the city’s core and rely on the subway system for daily transportation.

In response to this crisis, the MTA is considering rate hikes, though this will do little to entice those commuters who have opted for other means than the subway to navigate the city.

Such rate hikes have been criticized as a “regressive” means of generating revenue, meaning that they have a disproportionate burden on the lower and middle classes, who spend a greater portion of their total income on necessities such as transportation.