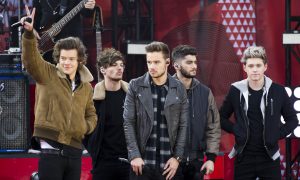 One Direction: ‘Where is Zayn’ Questions After Niall Shares Group Picture Without Him

One Direction fans are worried after Zayn Malik was missing from a recent group shot, which came after his absence on the Today show.

The other group members insisted that Malik’s first absence was due to a “stomach bug,” but haven’t let on about the more recent one, leaving fans uncertain.

The absences come after Star magazine reported that the group fears Malik may soon be leaving the boy band. Zayn is struggling with “misery in the limelight” and might quit the group after a tough year, the Daily Star tabloid reported recently.

“Zayn has been encouraged to seek professional therapy for his problems, while he assesses his future during their New Year break,” the tabloid said, noting that the other four members–Harry Styles, Liam Payne, Louis Tomlinson, and Niall Horan–have “vowed to carry on as a four-piece” if Malik does leave.

Horan fueled the latest round of rumors after he posted a picture on Instagram of himself, Payne, Styles, and Tomlinson with retired football player Ruud van Nistelrooy.

But the picture only prompted concern from fans over the absence of Zayn.

“Where is Zayn?” asked one. “Why does Zayn always disappear?”

“Is Zayn ok?” asked another.

Others also expressed concern over Zayn not being in the picture, but some suggested that he was the one who took it.

The absence came after Zayn missed 1D’s interview on the Today show, which prompted Matt Lauer to ask the other members whether Zayn was having drug problems.

“There’s obviously a lot of concern, a lot of fans have been tweeting overnight. Is it something more serious? There have been rumors of substance abuse. What’s going on?” Lauer said.

Zayn was unhappy with the accusations and later told The Sun, “I’m really angry and upset by what was said on the Today show. I was really ill at the weekend. That’s why I couldn’t fly to America.”

None of the boys have responded to the latest round of rumors.