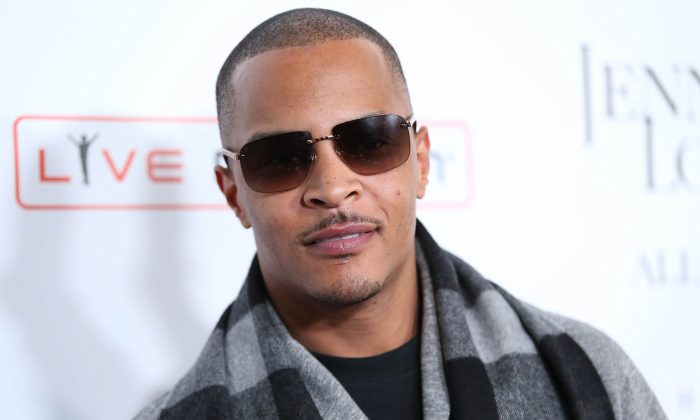 FILE- In this Jan. 20, 2016, file photo, T.I. arrives at the grand opening of "Jennifer Lopez: All I Have" show at Planet Hollywood Resort & Casino in Las Vegas. According to authorities several people were shot at a T.I concert in New York, Wednesday, May 25, 2016. (Photo by Omar Vega/Invision/AP, File)
Crime and Incidents

One Dead, Three Injured at T.I. Concert in New York

A multiple shooting took place at a New York concert, leaving one dead, and three others injured.

Three-time Grammy award-winning hip hop artist T.I., who was headlining the concert, had yet to perform. Police noted that rappers Maino and Uncle Murda were on stage when the shooting happened.

Ronald McPhatter, a 33-year-old man, was shot in the stomach and later died at Beth-Israel Hospital.

Bellevue Hospital received a 34-year-old man shot in the chest in critical but stable condition and a 26-year-old who was shot in the leg and is expected to survive.

Gunshots just went off at the T.I concert, never been so scared in my life pic.twitter.com/rn0CjpAuaU

One of the injured, a 30-year-old man, walked into NYU Medical Center himself with an gunshot wound to his leg.

Police reported that there were 950 individuals at the concert. They have recovered five .9mm cases and blood evidence.

Attendees captured video inside the venue, before and after the incident.

T.I., an Atlanta native whose given name is Clifford Joseph Harris, Jr., has chart-topping hits on Billboard, including “Whatever You Like” and “Live Your Life.”

In 2006, after another T.I. concert, the artist’s close friend and personal assistant, Philant Johnson, was fatally shot. In 2009, T.I. plead guilty to three federal weapons charges, spending a year and a day in prison.

Irving Plaza does have metal detectors on the premises. Police confirmed that the venue’s security protocol was followed.

NYPD Commissioner William Bratton said investigators should be able to close the case quickly, according to a WOR Radio interview on Thursday morning, May 26.

Radio host Len Berman said he heard the shooter was possibly support personnel for the concert.

“The concertgoers were checked for arms, and now you have these other clowns who apparently can walk in with their firearms,” Berman said.

Bratton said: “When you talk about clowns, knuckleheads, it’s unfortunate that it’s still in that gangster rap world. That’s what you’re dealing with: That gangster lifestyle.”

The venue posted the below statement on its Facebook page.