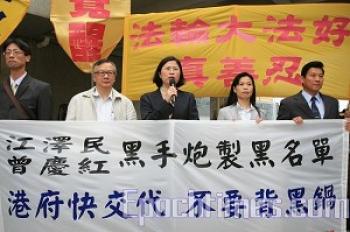 The Hong Kong Human Rights Monitor (HKHRM) submitted a complaint to the HK Legislative Council’s Panel on Administration of Justice and Legal Services and the Panel on Security, questioning the operations of the HK Special Administrative Region’s Immigration Department.

The Legislative Council has initiated an investigation to determine if the HK Immigration Department intentionally destroyed documents related to the incident.

Taiwanese Falun Gong practitioners have sued the HK Immigration Department, accusing officials of cooperating with the Chinese Communist Party (CCP) in the persecution of Falun Gong by enforcing a “blacklist” under instructions from the CCP.

Taiwanese human rights attorney Ms. Theresa Chu, one of the plaintiffs, said this is about basic human rights: It was illegal for Immigration Department officials to reject Falun Gong practitioners based on their identity and faith.

Ms. Chu affirmed that she was refused entry into Hong Kong on politically sensitive dates, such as July 1, 2007 (the CCP’s anniversary), although she was able to enter several times when making preparations for the case.

Immigration Department officials have offered inconsistent answers when asked if Falun Gong practitioners were turned away based on a blacklist. At first they said that the plaintiffs were refused entry due to the need to maintain “public order,” and documents pertaining to this decision were withheld.

Timothy Tong, who was serving as secretary for security at the time, told the judge the documents were too sensitive to be disclosed. However, two months later, when the court subpoenaed the documents, Immigration Department officials said the lists had been destroyed.

HKHRM director Mr. Law Yuk Kai told The Epoch Times that the case involves many important questions. “Our worry is that if the documents were indeed destroyed, a third party or independent monitoring agency would be unable to assess whether the authorities have indeed abused power.

“If the documents actually still exist but are hidden or were destroyed recently after being subpoenaed by the court, that is even less acceptable. Destroying the documents is a violation of public trust and good operational procedures.”

HKHRM has asked to review the procedures the Immigration Department follows in handling sensitive materials, and has asked what new policies it has adopted to fulfill the duty of candor.

“My other concern is that it is unfair to the people on the blacklist; it also applies to other politically-motivated information if law enforcement agencies keep such information for a long time,” Mr. Law continued.

“Officials from the administration, the Privacy Commissioner for Private Data, and the archival department should study how to preserve materials, to prevent law enforcement agencies [or] officials from the abuse of power,” he said.

In the long term, HKHRM is asking the government to legislate how to archive information so that government archives can be properly established, kept, destroyed, and declassified.

Mr. Law said he is concerned about the Immigration officials' many improper actions. If the administration merely follows orders from Beijing and prevents people from entering Hong Kong, then “they have essentially given up Hong Kong’s independent authority to grant entry and damaged Hong Kong’s autonomous administration.”

He hopes investigation by the Legislative Council can prevent similar occurrences in the future.

The complaint by HKHRM stated, “Examples from other countries (including Nazi Germany and countries in South America) demonstrate that many human rights violations can be rectified when there are proper government archives. Without proper records, the court is hardly able to uphold justice.”

Ms. Chu said that the HKHRM’s complaint underscores the conscience of Hong Kong’s human rights activists and should be applauded.

“The CCP’s influence on the Hong Kong government and on law enforcement in Hong Kong is a blatant act that demonstrates how the latter handles all Falun Gong-related cases,” she said. “Now no one in the Taiwanese legal system still believes in Hong Kong’s ‘One County, Two Systems.’”

She said that when Beijing first proposed “One Country, Two Systems,” the regime wanted to show Taiwan that it would work. But now, with the HK government abandoning talks regarding democracy and human rights for China, the CCP is showing its true colors.

Ms. Chu urged the Legislative Council to adopt the suggestions of HKHRM and take action. “They are not doing it for the plaintiffs from Taiwan. They are doing it for Hong Kong itself,” she said.

“By the same token, Hong Kong Immigration’s refusal of entry for both innocent Taiwanese citizens and the world-famous Shen Yun Performing Arts in January 2010 lets the Taiwanese people clearly see the true nature of the CCP and not hold on to any illusions about it,” she said.