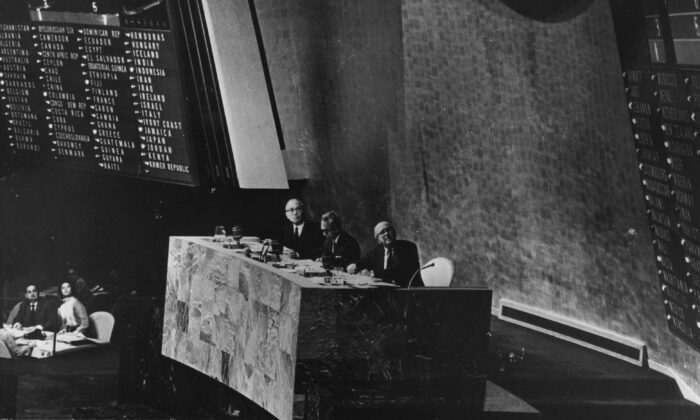 Communist China was voted to replace the Republic of China (Taiwan) as a member state of the U.N., when Secretary-General U Thant, Assembly-President Adam Malik and Under-Secretary-General Ca Etavropoulos were at the United Nations General Assembly on Oct. 25, 1971. (Keystone/Getty Images)
Infiltrating the West

Kelly Song
Kelly Song is a U.S.-based writer for The Epoch Times focusing on all things related to China.
View profile
Follow
and Luo Ya

China replaced Taiwan to become a member of the United Nations 50 years ago. Experts believe their strategy of befriending small nations has been one of the reasons for the communist regime’s transformation into a major player in the United Nations.

The Chinese Communist Party (CCP) has been taking advantage of all possible opportunities, including participation in the U.N. peacekeeping missions, to advance its agenda and expand its influence, experts said.

On Oct. 25, CCP head Xi Jinping delivered a video message at the U.N. to commemorate the 50th anniversary of China’s joining the United Nations. Xi promoted multilateralism and the one-country-one-vote policy.

Chen Weijian, editor-in-chief of Beijing Spring, a human rights periodical, said that the CCP exploits multilateralism and has gained control of the U.N. via the one-country-one-vote policy; that by offering financial aid to small countries, the CCP has been buying their votes.

Dr. Feng Chongyi, Associate Professor in China Studies at the University of Technology in Sydney, Australia said, “Xi seems to be pretty confident now, because he knows money can buy support from his ‘little brothers’ in the United Nations.”

Taiwan, one of the founding members of the United Nations, lost its seat to China on Oct. 25, 1971, with the passing of U.N. General Assembly Resolution 2758. The resolution recognized that the CCP ruled mainland China as “the only legitimate representative of China to the United Nations.”

Wu Jianming, former Chinese diplomat and member of the CCP’s first U.N. delegation, wrote a book titled “Case Studies in Diplomacy II.” In his book, Wu revealed the “conquering the middle ground” strategy by Mao Zedong, former head of the CCP until 1976.

Mao identified under-developed countries in Asia, Africa, Latin America, and western Europe as the middle ground, where the CCP would strategically invest.

In the 1960s, many African countries newly became independent. The CCP quickly established a diplomatic relationship with them and offered them financial aid.

The railroad between Tanzania and Zambia was built in the 1960s when China’s domestic economy was suffering, as Wu pointed out, “but the project brought huge diplomatic advantage to the CCP.”

Except for three communist regimes, the rest were recipients of the CCP’s foreign aid.

In his book, Wu quoted Mao saying, “it was our African brothers who carried us into the United Nations.”

CCP Turned the UN Into a ‘Playground for Dictators’

Right after the 1989 Tiananmen Square massacre, the CCP befriended those countries who did not criticize it, as well as those with bad human rights records.

Feng Chongyi said the CCP would buy support from countries with bad human rights records, “because those countries will go against the democratic countries.”

Wu Jianming said in his book that the CCP relied on African countries’ votes to block the bills criticizing its human rights record in the 1990s.

In the past decade, the CCP played the same game with the Xinjiang issue. For instance, in July 2019, 22 U.N. member states issued a statement criticizing CCP’s genocidal policy against the Uyghurs in Xinjiang. Only a few days later, 37 countries issued a letter supporting the CCP. Again in June 2021, over 40 countries led by Canada criticized the CCP’s Xinjiang policy, but 65 countries led by Belarus supported the CCP’s measures.

Feng Chongyi said, the “CCP practices dictatorship inside China, but advocates ‘democracy’ and one-country-one-vote outside China. The U.N. has become the playground for dictators.”

Su Ziyun, director of the National Defense Strategy and Resources Research Institute of the Taiwan National Defense Security Academy, said the “CCP aims to export its influence by all means possible, including through U.N. peacekeeping troops.”

According to U.N. official data, as of September 2021, China has sent 2,158 persons to U.N. peacekeeping missions, 81 percent of whom are deployed in Africa with over 1,000 in South Sudan.

Africa is a major partner in the CCP’s Belt and Road Initiative (BRI). By February 2021, 45 out of 55 African countries had joined BRI. China has bypassed the United States to become the biggest investor in Africa.

Political commentator Li Linyi said: the “CCP’s participation in the peacekeeping missions has 3 reasons. Politically, it wants to build an image of a big nation and it wants to have the ‘right to speak’ in the U.N.; Financially, it wants to protect its state-owned enterprises’ strategic investment in oil and minerals; ideologically, it wants to export its communist culture.”

While it is commendable that U.N. peacekeepers carry out cross-cultural activities to promote diversity and mutual understanding, the Chinese peacekeepers do so to expand CCP’s influence.

The U.N. official website reported an event between elementary school pupils in Lebanon and China in April 2019 organized by Chinese U.N. peacekeepers. The event was a one-hour video meetup between students of Lycée Français International Elite School in Tyre (south Lebanon) and No. 7 Elementary School in Huizhou City (Guangdong, China).

Deputy Commander of Chinese U.N. peacekeepers based in south Lebanon, Major Sang Yangyang, said in the report that the central objective of the cross-cultural event was to promote peace.

However, what went on behind the scenes suggests a more complicated motivation. The Epoch Times acquired exclusive access to a letter sent by the Chinese peacekeepers to the Department of Education at Huicheng District, Huizhou city. The letter read, “to spread Chinese culture and expand China’s influence, we ask for your support in setting up a video meeting with No.7 Elementary School.”

Then the Huicheng District Education Department sent a letter to the Bureau of Foreign and Overseas Chinese Affairs, a local branch of CCP’s United Front Work Department, asking for guidance on the media coverage.

The event was reported widely in various Chinese media, in which Major Sang Yangyang was quoted saying, “Lebanon is an important partner of our Belt and Road Initiative, so it is of special significance that we increase the influence of our culture in this region.”

According to the U.N. website, the tasks of peacekeeping forces in Lebanon are to monitor the cessation of hostilities and help ensure humanitarian access to the civilian population. China has deployed 419 peacekeepers in Lebanon.