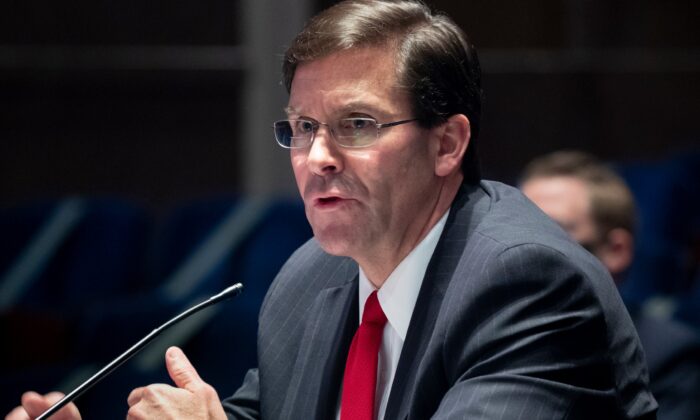 One China Policy Has ‘Outlived Its Usefulness’: Former Defense Secretary

The United States’s so-called “One China Policy” is no longer realistic or tenable, according to former U.S. Secretary of Defense Mark Esper.

“It may have been the case in 1972 that the people of Taiwan saw themselves as Chinese, but they don’t today,” Esper said during a July 26 talk at the Atlantic Council, a Washington, D.C.-based think tank.

“A majority of them see themselves as Taiwanese. They have a new, distinct cultural identity.”

The One China Policy is the United States’s longstanding diplomatic acknowledgment of China’s position that there is only one Chinese government. It is separate from the One China Principle, which is communist China’s doctrine that Taiwan is a de jure part of the mainland.

For some 50 years, the United States has recognized the status quo of one China, the original phrasing of which also acknowledged that Taiwan’s government, formally called the Republic of China, also had claims to the mainland.

Such a policy had “outlived its usefulness,” however, Esper said.

Aside from noting that the culture of Taiwan was fast becoming distinct from that of the mainland, Esper said that Taiwan had long ago relinquished all claims to the mainland and no longer contested its control. In that regard, the conflict which demanded the recognition of one Chinese government had long passed.

Furthermore, Esper said that the United States had always maintained that the peaceful resolution of China–Taiwan hostilities was of paramount importance, and that any effort to force or coerce a settlement between China and Taiwan would be seen as a “grave concern” by the United States.

“Going back 50 years, our views on this issue [have] been clear in that regard, that this would be a matter of ‘grave concern,’ which is often diplomatic language that we would be willing to go to war over this,” Esper said.

“It’s China that is undermining the One China Policy as all sides have understood it now for 50 years, and it’s China changing the status quo through force. Those are just the facts of the matter.”

Though the United States has long sworn off any right to play the mediator between Beijing, considering it a matter for Taiwan and China to settle amongst themselves, Esper said that Beijing was refusing to sit down with Taipei on high-level issues, undermining the entire purpose of the One China Policy.

Indeed, CCP leadership has become increasingly bellicose in its efforts to push international support for Taiwan’s de facto independence away, and to isolate the island from foreign assistance. In June, a Chinese general went so far as to threaten U.S. Defense Secretary Lloyd Austin with a war “no matter the cost,” if Chinese demands on the Taiwan issue were not met.

As such, Esper said, the United States ought to “re-evaluate our policy and how we go forward.”

He added that the United States’s policy of strategic ambiguity, in which it neither confirms nor denies that it would militarily defend Taiwan from Chinese invasion, should be brought to an end.

“At this point less strategic ambiguity is a good thing,” Esper said.

The idea that there could be one China with multiple systems of government, he added, was proven wrong by the CCP crushing supporters of democracy in Hong Kong. The idea that such a system would work in Taiwan, he said, was foolish.

“One Country Two Systems is a complete fallacy at this point,” Esper said. “Nobody believes in it and nobody ever will believe in it.”

“Further, they’re not going to believe in any other type of construct that the Chinese Communist Party puts forward.”