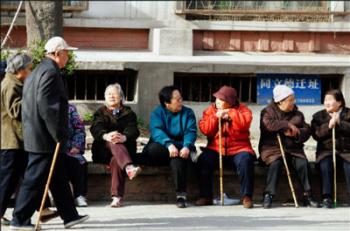 The number of seniors is climbing in China. A young couple born in the 80s are the sole caregivers of four aging parents. (Getty Images)
China

[ One-Child Generation in China Struggle to Care for Parents ]

As the first generation of Chinese born under the one-child policy reaches marrying age, and is faced with the task of being the sole caregivers for their parents, a recent survey shows that three-quarters of them don’t feel up to it.

“We can’t afford a separate apartment for our parents, and we can’t bring all of our parents to live together with us. What if one of them is seriously ill? Before, people had brothers and sisters to share the burden of care-giving. Now it’s just my spouse and I. We also need to work and make a living,” says Liu Hong, who lives and works in Beijing, in an interview with China Youth Daily.

The married couples of this generation need to take care of four elderly: both parents of wife and husband. High housing costs pose a problem for them all to live together.

There are approximately 169 million people over the age of 60 in China, according to state media, consisting of 12.5 percent of the total population.

Researcher Zhu Qingfang of the Chinese Academy of Social Sciences says China faces the problem of its senior population growing faster than the world average and the overall population, and faster than economic development can support.

The survey found that 74.1 percent of the only children born in the 80s were unable to care for their parents as they wished, due to work and other obligations.

More than two-thirds wanted to play a bigger role in taking care of their parents. Half of the respondents lived in a different city than their parents, while just over a third said they didn’t trust nursing homes or other social service agencies.

The Chinese Communist Party adopted its family planning policies in 1979, drawn up by aerospace engineers under the aegis of “scientific Marxism.” There are over 100 million people born under the one-child policy now, and the social consequences have been large. There are 130 males for every 100 females, for example.

According to the China Aging Development Foundation, there are now about 4 million social service agencies for seniors in China, with nearly 1.6 million beds. For every 1000 seniors over 60, there is on average only nine beds available.