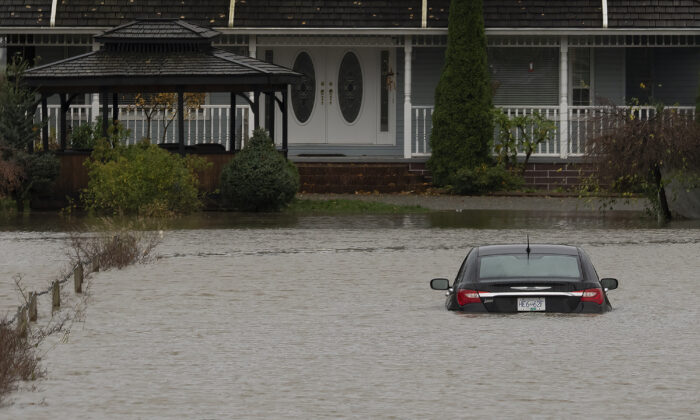 A vehicle is submerged in flood waters along a road in Abbotsford, B.C., on Nov. 15, 2021. (The Canadian Press/Jonathan Hayward
Canada

One Body Found in BC Highway Landslide, More Missing

RCMP say the body of a woman has been recovered from a landslide across Highway 99 near Lillooet, B.C., following historic rainfall as a search continues for others who may be buried in the debris.

Staff Sgt. Janelle Shoihet said Tuesday the total number of people and vehicles unaccounted for has not yet been confirmed but investigators have received reports of two people who are missing.

“We are asking anyone who was a witness to the event or believes their loved one is missing and has not yet been able to make contact with them to contact the Pemberton or Lillooet RCMP detachments,” she said in a written statement.

David MacKenzie, manager of Pemberton District Search and Rescue, confirmed fatalities in the slide, about 42 kilometres south of Lillooet.

“Our team was able to recover a couple of people so far but it’s still an ongoing situation and I can’t really comment any further on that,” he said, though it was not immediately clear if the woman confirmed dead by the RCMP was among those two victims.

Crews were called to the slide around noon on Monday and the search is ongoing, MacKenzie said.

Several people were able to get out of their cars, he said, adding search conditions were challenging and heavy equipment would be needed to remove large debris blocking the way on the mountain highway.

A search for anyone who may have been buried by two slides is also underway in the Highway 7 area near Agassiz after about 300 people spent the night in their vehicles and were helicoptered to safety on Monday.

Jonathan Gormick, information officer with the Vancouver Heavy Urban Search and Rescue Team, said while the roadway has been cleared of potentially trapped vehicles or people, efforts will now be focused on the slide’s debris field.

Premier John Horgan said the tragedy brought on by unprecedented rain has left him with “sorrow in my heart.”

Speaking from his office during a virtual Cascadia Innovation Corridor event with Washington state Gov. Jay Inslee, Horgan said the impact of the “rain river” over a record-breaking 24-hour period involves the ravages of climate change.

Public Safety Minister Mike Farnworth said cabinet ministers will be meeting on Wednesday to consider the declaration of a provincewide state of emergency.

He said supplies like food, cots and blankets are being delivered to the town of Hope, which is supporting nearly 1,100 people forced from their homes.

“There’s an access road being worked on right now that will soon reconnect Hope with the rest of the Lower Mainland,” Farnworth said. “One of our key priorities is making sure there’s a flow of supplies so that people can buy food and essential goods in areas with flooded or damaged roads or railways.”

Fast-rising water levels from a river in Washington state overwhelmed rescuers in Abbotsford, B.C., on Tuesday as 1,100 homes were evacuated.

Those residents join thousands of others in the province who were forced from their homes by floods or landslides over a 48-hour period starting on Sunday night.

Abbotsford Mayor Henry Braun said Tuesday that impassable highways are creating havoc as police and firefighters try to get people to evacuation centres.

“It breaks my heart to see what’s going on in our city,” he said.

Sunny skies followed two days of torrential rain that matched the region’s typical amount over the entire month of November, but the mayor said the water keeps rising and Highway 1 will be cut off for some time.

“People need to prepare that they may not be able to travel for a few days. Even then, there are washouts further up into the Interior, the Coquihalla (Highway), the (Fraser) Canyon. There’s not going to be any movement of trucks any time soon, or trains for that matter.”

Braun cautioned people against driving into what could be extremely deep ditches, adding he’s worried about getting enough information from officials in Washington state about water levels that have risen dramatically from the overflowing Nooksack River and over the Sumas dike.

“When are we going to crest? When is it going to level off here? It’s like a full cup of coffee. Once it’s full, it keeps flowing over the sides.”

The evacuations in Abbotsford add to others in various parts of B.C., including in Merritt, where the entire town of 7,000 was forced to leave when the sanitation system failed due to an “atmospheric river” that caused flooding in the southwest and central parts of the province.

More than 20 emergency centres have been activated to help house stranded travellers.

Multiple roadways have been closed because of flooding, landslides or washed-out bridges, including sections of Highway 1, Highway 3, Highway 5, Highway 11, Highway 91 and Highway 99.

Transportation Minister Rob Fleming said Highway 3 is likely to be the quickest route to reopen, possibly by the end of the weekend.

However, damage to Highway 1 through the Fraser Canyon as well as the Coquihalla Highway is so extreme that geotechnical assessments won’t be possible until conditions are drier, he said.

“We fully recognize how important it is right now in British Columbia to reopen the road connections from the Lower Mainland to the Interior to get supply chains moving again.”