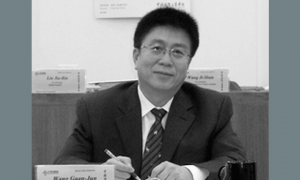 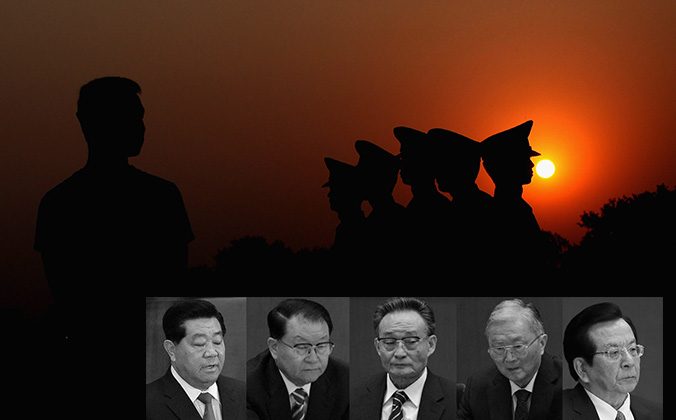 After months of rumors that Zhou was already under house arrest, a formal investigation for suspected “serious disciplinary violations” was announced on July 29, making him the biggest “tiger”—top-ranking Party official—of all the officials investigated in Party head Xi Jinping’s campaign.

Afterwards, Chinese Communist Party (CCP) mouthpiece People.com.cn commented that taking down this big tiger is not the end. The article was removed several hours after it was published, but observers have taken its publication as a significant signal from the Party that an even greater action is to come. There are more and bigger tigers behind Zhou.

The tradition within the Party has been that present or former members of the Standing Committee of the Politburo—the small group of men who sit atop the Party hierarchy—receive a kind of get-out-of-jail-free card and cannot be arrested.

Yet there are five more retired Standing Committee members who may be in line for purging. One of them—Zeng Qinghong—is already rumored to be under arrest.

Zhou was raised quickly up through the ranks by former Party head Jiang Zemin and has been a bulwark of his faction. His fall follows that of several others top members of Jiang’s faction, including former Politburo member Bo Xilai, oil executive Jiang Jiemin, and the former deputy commander of China’s armed forces, Xu Caihou.

This rolling series of purges has stripped supporters, and the power they held, away from Jiang Zemin. According to Party insiders, Jiang and his faction have opposed Xi Jinping in various ways, including assassination attempts.

The Jiang faction has fought to regain power because they fear being held accountable for the crimes committed during the 15-year-long persecution of the spiritual practice of Falun Gong, the Party insiders say. Jiang himself is now said to fear prosecution.

Recent media reports suggest Jiang has reason for concern. The Financial Times has reported that Xi Jinping has begun an anti-corruption investigation in Shanghai, where Jiang’s faction is based. The Central News Agency in Taiwan reported that the anti-corruption campaign is moving towards Jiang Zemin’s base camp.

Apple Daily in Hong Kong has reported that Zeng Qinghong’s family is under investigation for involvement in Zhou’s case. Reports from various quarters are pointing directly at Zhou’s ally Zeng Qinghong, and Zhou and Zeng’s real boss Jiang Zemin.

Among the former Standing Committee members, former Party head Hu Jintao and former premier Wen Jiabao are Xi’s allies. Jiang’s confidants are Zhou Yongkang, Zeng Qinghong, Jia Qinglin, Li Changchun, Luo Gan, and Wu Bangguo, all of whom have either been investigated or are likely to be investigated in Xi’s campaign.

Epoch Times reported on July 12 that former Standing Committee vice-chair Zeng, the second most important figure in the Jiang faction, had been arrested and was under secret investigation.

A former head of the petroleum monopoly in China and one of the head’s of the regime’s intelligence services, Zeng has been Jiang’s top adviser and has played an important role in struggles between Jiang and his successor Hu Jintao and between Jiang and Xi Jinping.

Zeng gave advice to Jiang about the persecution and spared no efforts in helping carry it out, Party insiders say.

Scandals centered on Zeng have recently been publicized, increasing speculation that the ground is being prepared for a formal announcement that Zeng has been investigated.

On July 11, it was widely rumored on online media that Jia had been detained.

Jia’s biggest scandal was his involvement in China’s largest smuggling case. However, because Jia helped Jiang persecute Falun Gong, Jia avoided all fallout from the case.

Jia became a member of the Standing Committee in 1997. During his tenure as secretary of the Party’s Beijing Municipal Committee from 1999 to 2002, Jia was directly involved in the persecution of Falun Gong.

The Xiamen Yuanhua case was brought in 2000. More than 600 Yuanhua officers were investigated when the Yuanhua syndicate’s activities reached epic proportions with a total worth of roughly 53 billion yuan (US $6.4 billion).

Jia intended to resign, but Jiang refused to allow it and instead promoted him to become the chairman of the Chinese People’s Political Consultative Conference. Jiang said he would be finished if Jia stepped down. Jiang made use of Jia, and Jia protected Jiang.

After Li Changchun served as number two man in the CCP in Henan Province from 1990-1992, Jiang began promoting him up through the ranks, after Li flattered him and gained his trust.

Jiang promoted Li to the Standing Committee in 2002, placing him in charge of propaganda and ideology. In that position, Li directed a propaganda campaign to slander Falun Gong and seek to discredit it before the Chinese people. Li’s propaganda and Zhou Yongkang’s “stability maintenance” system of repression worked closely together to implement the persecution.

During his peak, Li was the fifth most powerful figure in the Party. Since 2012, however, scandals involving the Li family’s scandals have been publicized, with news about his children’s corrupt wealth appearing continuously in media headlines.

On July 21 China’s largest search engine, Baidu, lifted its censorship on the words “Luo Gan persecution.” This made public the crimes of Luo Gan and the “610 Office,” Jiang’s extralegal organization created for the specific purpose of persecuting Falun Gong.

Luo is yet another high-ranking official in Jiang’s faction directly involved in planning and implementing the persecution. Following Jiang Zemin’s orders, in 2000 Luo organized a nationwide persecution of Falun Gong.

According to Party insiders, Luo Gan was also involved in staging the January 23, 2001 “self-immolations,” which were used to discredit Falun Gong.

There were never more than seven Standing Committee members at the same time until the Party’s 16th National Congress in 2002. Facing retirement, Jiang expanded the membership of the Standing Committee to 9, packing it with his loyalists in order to assure his continued influence. Luo was meant to retire from his post as head of China’s domestic security apparatus, but Jiang instead pushed him into the Standing Committee.

Luo Gan has been sued in more than 30 countries around the world for his harsh persecution of Falun Gong.

Wu was the number two man in the Shanghai CCP when Jiang headed it. He retired as chair of the Standing Committee of the National People’s Congress in 2013.

Like others close to Jiang, he was moved quickly into positions of power. He became head of the Shanghai CCP and then a member of the Politburo Standing Committee in 2002.

Wu’s family is reported to have amassed hundreds of billions of yuan with Jiang’s assistance. In 2012, after the first move was taken against Jiang’s faction—the purge of Bo Xilai—Chinese-language media began publishing information about scandals involving Wu’s family.

Washington-based China expert Shi Zangshan, said: “At this sensitive moment, Wu Bangguo’s negative reports appeared. It is very likely that [the CCP] is asking Wu Bangguo to take sides. If he takes the wrong choice, he will end up like Zhou Yongkang. A lot of his corruption will surface before he is forced to step down.”