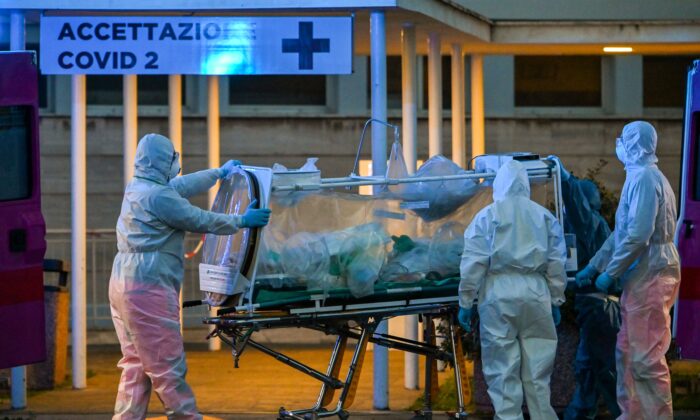 Medical workers in coveralls wheel a patient under intensive care into the newly built Columbus Covid 2 temporary hospital to fight the CCP virus, at the Gemelli hospital in Rome on March 16, 2020. (Andreas Solaro /AFP via Getty Images)
Viewpoints

One Belt, One Road… One Virus

As the entire world has struggled to cope with the fallout from the CCP virus, all eyes have remained fixed on Italy, where the virus is reaping its most awful toll. Deaths in Italy from the virus have now surpassed the official count claimed by the communist officials of China.

As of March 23, China has acknowledged a total of 3,270 deaths from the disease, while Italy’s toll has far surpassed that at 5,476 and is climbing rapidly.

Another of the hardest-hit countries is Iran, which claims 1,812 dead, although as with China, there’s good reason to believe the Iranian regime is hiding the true numbers. Spain and France have also been deeply affected, with 2,206 and 674 deaths, respectively.

When you consider that the Chinese Communist Party’s (CCP) and Iran’s numbers are likely far higher than what has been reported because those regimes can’t be trusted to accurately self-report, the true impact of this disaster on Italy is even more apparent. Italy’s numbers can be trusted, as can Spain and France’s, and so the disparity is stark, ranging from 5,476 to 2,206 to 674.

So the question immediately arises: Why does Italy, a free, democratic country, have such a high death toll?

There has been much recent speculation and commentary about this development, mostly centering around Italy’s aging population or the quality of available health care.

In fact, the chief reason that Italy now finds itself at the center of the worst of this current pandemic isn’t due to a larger elderly population or substandard medical care. It can be summed up in one word: globalism.

The first mistake was to allow a huge migration of ethnic Chinese into the country. There are now an estimated 320,000 Chinese living in Italy, many of them in the northern part of the country where the virus has been especially bad. (The actual number could be far higher since there is a booming illegal human-smuggling trade.)

The second mistake was to enter into an economic agreement with the CCP called the “Belt and Road Initiative” (BRI, also known as One Belt, One Road). The Party is using this economic policy in countries such as Italy to position itself for world dominance, and specifically as a competitor to the United States.

As the Council on Foreign Relations explained in an article published in January, titled “China’s Massive Belt and Road Initiative”:

“China’s Belt and Road Initiative, sometimes referred to as the New Silk Road, is one of the most ambitious infrastructure projects ever conceived. Launched in 2013 by President Xi Jinping, the vast collection of development and investment initiatives would stretch from East Asia to Europe, significantly expanding China’s economic and political influence.”

Opening the Door to a Pandemic

Tracy Beanz of the investigative news website UncoverDC.com published an amazing report on March 20, titled “Why Italy?” that took an in-depth look at why it so quickly became the world’s most vulnerable country to the CCP virus and its devastating effects.

In her report, Beanz cites several news articles from years ago where this decades-long mass migration from China to Italy was examined in a mostly positive light, such as this article, which appeared in September 2010 in The New York Times, titled “Chinese Remake the ‘Made In Italy’ Fashion Label.”

It was exactly one year ago that the BRI economic agreement between the CCP and the Italian government was finalized.

Now, it appears a far more accurate title for this policy would be “One Belt, One Road… One Virus.”

The biggest overall result of this worldwide pandemic launched from inside China is that it is causing many of the world’s political leaders to reassess their relationship, both economic and diplomatic, with the CCP.

A World Awakens to the Globalist CCP Threat

The pandemic has awakened many to the direct and very real danger of being dependent on the regime in Beijing, under the CCP’s iron-fisted control, for vital products and services such as medical supplies, lifesaving drugs, and key electronics.

Globalism was sold by our political elite class as a wonderfully positive concept over the past several decades, since it was framed as the inevitable wave of the future. However, there are also very real dangers and pitfalls that come with outsourcing your country’s vital medical and national security infrastructure to what may very well be a hostile foreign power.

Before the outbreak of this pandemic, the CCP had certainly engaged in enough blatantly bad behavior in recent years to lead any responsible political leader to seriously question any policy of outsourcing vital infrastructure to China.

Sen. Josh Hawley (R-Mo.) and Sen. Tom Cotton (R-Ark.) and several other legislators have been tirelessly working to point out the very real threat of the CCP’s rampant spying and tech theft, and also how outsourcing 5G technology to Huawei was a direct compromise of the United States’ national security.

In just the past year, with its crude handling of the Hong Kong protests, followed by the NBA’s blatant self-censoring, along with the revelation of massive concentration camps created for Uyghurs, there were already plenty of reasons for President Donald Trump‘s administration to begin looking for ways to decouple from the United States’ economic and infrastructure dependence on China.

Even some top Democrats who were at the forefront of the globalist agenda in the Bush and Obama years have come around to the wisdom of steering clear of the CCP when it comes to vital US infrastructure.

Had China’s present totalitarian government been honest with the rest of the world from November 2019 through January, the virus could have been contained within China.

Instead, even into mid-January, the CCP was lying to the World Health Organization, which was passing fake information to Trump. That was while the Chinese authorities were desperately trying to suppress the truth, arresting and imprisoning doctors and whistleblowers who were revealing the reality of the situation.

The CCP government has followed this duplicity with engaging in an infuriating disinformation campaign about the virus’s origins in China, followed by a threat to withhold Chinese-manufactured medical drugs from the United States during this present crisis.

The CCP is a hostile foreign power, and it is far past time that many governments around the world began treating it that way.