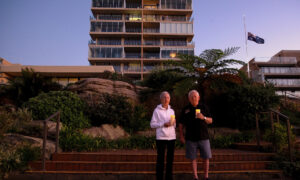 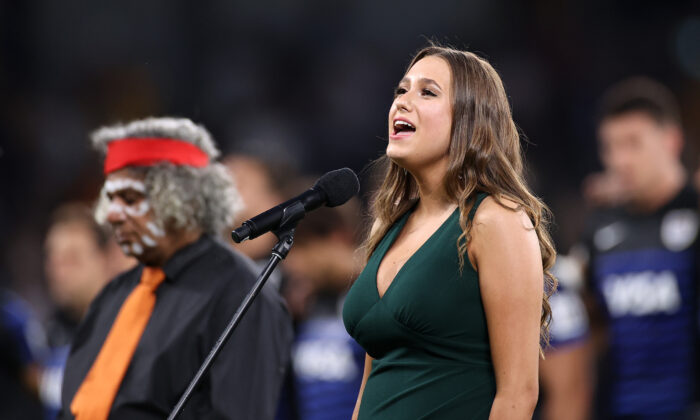 Olivia Fox sings the national anthem during the 2020 Tri-Nations match between the Australian Wallabies and the Argentina Pumas at Bankwest Stadium in Sydney, Australia on Dec. 5, 2020. (Cameron Spencer/Getty Images)
Australia

‘One and Free’: Australia Changes One Word in National to Be More Inclusive

Prime Minister Scott Morrison on New Years Day announced a change to the national anthem in an effort to reflect a “spirit of unity” by acknowledging Indigenous people’s history and togetherness through the COVID-19 pandemic.

Governor-General David Hurley confirmed the amendment to “Advance Australia Fair” on Thursday, the government said in a statement.

Effective from New Years Day the second line in the national anthem will read “for we are one and free,” changed from “for we are young and free.”

Morrison said the alteration was in recognition of First Nations peoples who have lived on the continent for thousands of years and the nation’s united efforts enduring the pandemic throughout the last year.

“We are a nation that prevails. We are making our own Australian way through this crisis. A way guided by our enduring principles and values,” Morrison wrote in an op-ed published in the Sydney Morning Herald on Thursday.

He said, “Australia as a modern nation may be relatively young, but our country’s story is ancient, as are the stories of the many First Nations peoples whose stewardship we rightly acknowledge and respect.”

“In the spirit of unity, it is only right that we also now acknowledge this and ensure our national anthem reflects this truth and shared appreciation,” he said.

“I disagree with the decision to remove the word ‘young’ from our national anthem. We are a young nation that doesn’t have the same historical hang-ups of older cultures. That’s why people overseas want to move here because we offer a fresh, young start. Happy new year to all,” he wrote on Twitter on Jan. 1.

The change to the national anthem comes after the 2020 National Rugby League match between the Indigenous All-Stars and Māori All-Stars scrapped the pre-game national anthem. On October 2o20, the NRL State of Origin was also on the brink of also dropping the anthem before Morrison stepped in.

According to a report by the ABC on Feb. 6, 2020, several players raised concerns that the “words of the anthem do not represent them or their families and does not include an acknowledgement of First Nations people,” Australian Rugby League Commission chairman Peter V’landys said.

This was followed by a call in November by New South Wales Premier Gladys Berejiklian to change “young and free” to “one and free” to be more inclusive of Indigenous peoples.

Peter Dodds McCormick composed “Advance Australia Fair” and first performed it in 1878. In 1984, then Prime Minister Bob Hawke replaced “God Save the Queen” with McCormick’s anthem.