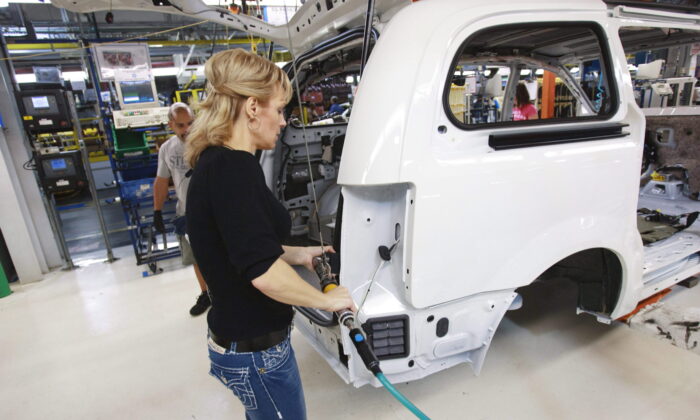 A worker on the production line at Chrysler's assembly plant in Windsor, Ont., in a file photo. (The Canadian Press/Geoff Robins)
Canada

Once US’s ‘Economic Laggard,’ Michigan’s Economy Is Succeeding Where Ontario’s Has Failed; Here’s Why

Policy changes have had an adverse impact on Ontario's economy, while Michigan's pro-growth policies have helped the state prosper, study finds
By Omid Ghoreishi

The economies of Ontario and Michigan have a lot in common, but while Michigan—once known as the “economic laggard” of the United States—has experienced a surge in economic and employment growth thanks to pro-growth policy reforms, Ontario’s economy has shown a weak performance in recent years because of policy changes that undermined growth prospects, a new study says.

“In the face of daunting challenges, Michigan took charge of its economic future with an ambitious reform package that has coincided with substantial job growth and a rebirth of manufacturing in the state,” said Ben Eisen, senior fellow at the Fraser Institute and co-author of the study. “Ontario should take note of Michigan’s policy reforms and its successful economic turnaround.”

The economies of both Ontario and Michigan took a hit during the recession of the late 2000s, but while Ontario lost close to 170,000 manufacturing jobs from 2007 to 2017, Michigan added 47,000 jobs during the same period, the study says.

The authors say the Rust Belt state’s superior economic performance came as a result of a series of policy reforms in 2011 that spurred the economy, including tax reforms and lowering of the corporate income tax, budget cuts and spending limits, and passing right-to-work legislation—which ended unions’ ability to require compulsory fees. They add that while it may be hard to make causal links  between any specific policy change and the state’s economic performance, “it would be important for Ontario’s policy-makers to study Michigan’s initiatives.”

According to the study, prior to 2011, growth in Michigan’s real per-capita GDP—a measure of the economic output per person—was significantly lower than Ontario’s, even before the crash of 2008/2009. However, after the state started the policy reforms, the situation has reversed, with Michigan having an average per-capita GDP growth of 1.7 percent compared to Ontario’s 1.2 percent.

A similar trend is observed in manufacturing output in the two jurisdictions, with Michigan having an output growth of 3 percent after 2011, while Ontario has had 1.8 percent. This growth has meant that Michigan has also enjoyed higher manufacturing employment growth compared to Ontario.

Besides the manufacturing sector, Michigan has had a higher overall private-sector job creation than Ontario, with an average 1.9 percent annual private-sector employment growth compared to 1.4 percent in Ontario.

The state has experienced better fiscal outcomes as well, whereas Ontario has run continuous budget deficits, resulting in substantial accumulation of debt, the authors say.

“While Michigan was embarking on its policy reforms, Ontario’s government was simultaneously pursuing several policy choices that hindered the province’s performance and made it more difficult for Ontarians to prosper,” the study says.

One of the initiatives undertaken by Michigan in 2011 was tax reform, with the state abolishing its existing complex business tax scheme in favour of a more simplified one, which featured a single flat rate of 6 percent.

The authors say Michigan’s “ambitious tax reform” is of the greatest importance for Ontario to study.

The study notes that Ontario once had a business tax advantage that helped attract businesses to the province, but tax reforms at the federal level in the United States as well as in several states including Michigan—and even domestically in Alberta—have reduced Ontario’s overall competitiveness.

Another Michigan initiative that Ontario policy-makers should study is the state’s reduction in government expenditures, the authors say.

“The spending restraint exercised in the reform era helped ensure that Michigan did not acquire substantial new debt in the years following the 2008/09 recession, as occurred in Ontario,” the study says.

The authors add that the U.S. state’s economic revival shows that “even seemingly moribund economies can reverse course and become economic powerhouses.”