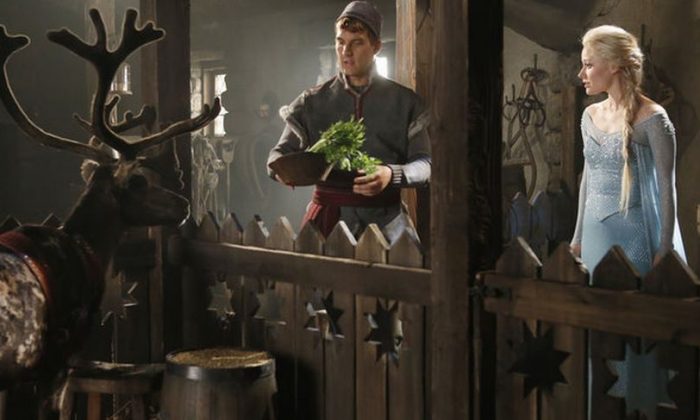 Kristoff, middle, with Sven and Elsa in Once Upon a Time season 4. (ABC)
Entertainment

Once Upon a Time Season 4 Spoilers: Kristoff From ‘Frozen’ is Still With Anna; Living in Arendelle Castle

Once Upon a Time season 4 will notably introduce the main Frozen characters into the universe, with the timeline picking up where the movie left off.

Elsa, Anna, and Kristoff are part of the cast.

A new plot spoiler recently emerged–Kristoff and Anna will still be together, according to Scott Michael Foster, who is playing Kristoff.

“He’s obviously with Anna. At the end of the movie, they’re together, Foster told Hollywood Life. “Anna is the apple of his eye.”

But a big change has happened–Kristoff is living in Arendelle castle, a big change for the rugged man who lived outside for a lot of his life.

“He’s a rugged mountain man who grew up with trolls, so there’s a bunch of avenues he can take to expand his character, based off him not being used to palace life,” Foster said.

Other spoilers about the introduction of the Frozen world have been revealed this summer, including the fact that there will be flashbacks to points in time before the events that take place in the movie.

There’s some speculation that Elizabeth Mitchell, who is playing a yet-unrevealed character in the Frozen world, is actually Anna and Elsa’s mother. She would have to appear in flashbacks because their mother was killed during the animated film.

Season 4 is set to premiere on Sunday, September 28.

A special look into the Frozen story, The Story of Frozen: Making a Disney Animated Classic, will air on Tuesday, September 2.