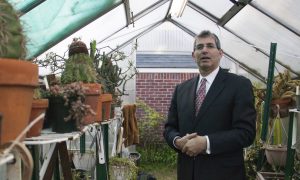 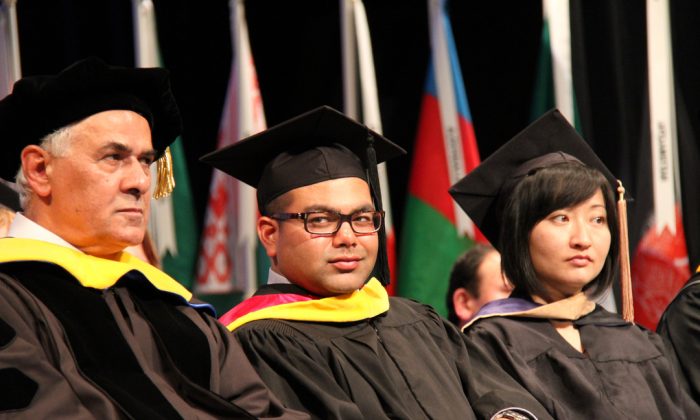 VIRGINIA—Ricardo Sarmiento arrived at the airport in Dallas from Columbia with two pieces of luggage. Not familiar enough with English to understand the green and yellow signs that he saw, he was lost. Sarmiento had to approach five different people to direct him.

Fast-forward more than ten years. Sarmiento found his way to the podium at the 8th annual commencement ceremony of Virginia International University (VIU), where he addressed his peers, teachers, friends and colleagues as valedictorian on May 5.

Sarmiento encouraged his classmates have fun, and to find and do what motivates them every day. His message went to a graduating class from more than 30 countries including far away Azerbaijan, Bangladesh and Nepal.

VIU’s student body for the academic 2012-2013 year had 882 graduate and undergraduate students. Of those, 13 percent were from Africa, 21 percent from Asia and 15 percent are from the Middle East.

“After ten years, we will see you as a successful individual, “ said Dr. Isa Sarac, president of VIU, to the graduating class. Sarac identified the challenges that students faced. He himself is an immigrant to the United States, originally from Turkey. “Use your knowledge, you will be able to make your way around life’s obstacles,” said Sarac.

As students arrived at VIU, they may have wondered just what is the cultural mainstream of American society, since they are in an extremely diverse university setting. Commencement speaker Toby Chaudhuri touched on this topic.

“There is no main stream … We are a country and a world of many streams … You represent the fabric of our world and our communities,” said Chaudhuri, co–founder of SocialXDesign and senior advisor for the White House.

The diversity of the faculty of VIU mirrors that of the student body. Outstanding faculty awards were presented to Ms. Connie Lee, director of the ESL program, Kevin Martin, director of the TESOL program, Dr. Johnson Kinyua, dean of the School of Computer Information Systems, Dr. Michael Ross, dean School of Business.

The graduates cheered for their professors.

“I feel proud to be a part of the VIU community,” said Saurav Rijal, who received a Masters of Business Administration degree in Healthcare Management. Rizal, from Nepal, said health care is in a tough situation in Nepal and he wants to change it. He said that he plans to return to Nepal in a few years to do just that.