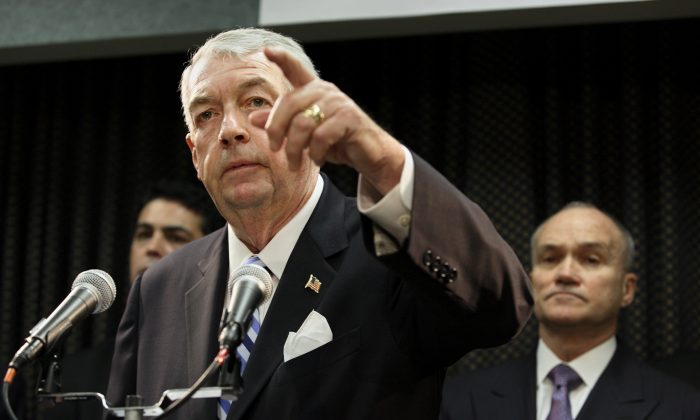 NEW YORK—Charles “Joe” Hynes broke onto the national scene in the 1980s as the special prosecutor appointed by then-Gov. Mario Cuomo to investigate a notorious racial attack in Howard Beach, Queens.

In the decades that followed, Hynes established himself as a respected fixture as Brooklyn’s district attorney. But a recent wave of bad publicity—an election defeat after six terms, the recent voiding of wrongful convictions won on his watch, and a corruption investigation into his use of criminal forfeiture funds—is threatening Hynes’s legacy.

Federal and state authorities are investigating allegations that Hynes funneled more than $200,000 in forfeiture money from drug and other criminal investigations into his failed re-election campaign. The probe was prompted by a scathing report by the city’s Department of Investigation that concluded the misuse of funds could amount to larceny.

“It’s a very depressing thing to see someone who had been a courageous prosecutor have things come to an end like this,” said Kenneth Sherrill, a retired politics professor at Hunter College. “You really have to ask, how could an old pro like Hynes screw up this badly?”

A lawyer for Hynes, Robert Schwartz, said his 79-year-old client stands by his record and denies any wrongdoing.

Both the state attorney general’s office and the U.S. attorney in Brooklyn have declined to discuss the case.

More than 25 years ago, Cuomo turned to Hynes amid widespread outrage over Howard Beach. The facts of the case were disturbing: After a car carrying four black men broke down in the white neighborhood, a group of youths using racial slurs accosted them outside a pizza parlor. One victim was chased onto a highway where he was killed by a car. Another was beaten with a bat.

“I realized we were looking at more than a fatal combination of race and violence,” Hynes wrote in a book about the case. “We were looking at a tragedy. And that tragedy would consume the next year of my life.”

Hynes ended up winning three convictions for manslaughter and persuaded a judge to impose stiff consecutive sentences. The fame fueled a victory in his first run for district attorney in 1989.

The prosecutor earned a solid reputation, in part by pioneering programs that directed drug offenders into treatment programs and sought to reduce recidivism by helping parolees get housing and steady jobs. In the 2013 election, he was endorsed by old-guard politicians like former Mayor David Dinkins and a former congressman, the Rev. Floyd Flake.

But Hynes’s challengers were able to exploit a brewing scandal sparked by the dismissal of a man who was convicted of murder based on new evidence showing that a detective had coached a witness to pick him out of a lineup. Dozens of other cases are under review amid allegations that his office used tainted evidence to win other murder convictions.

“How did this happen on his watch?” the eventual winner, Kenneth Thompson, asked during the campaign.

Hynes left office with other baggage—a pending $150 million lawsuit brought by a Brooklyn murder suspect who accused his office of withholding evidence and knowingly allowing false testimony. The suspect’s lawyers have alleged that the misconduct was so pervasive that Hynes had to have known about it.

Things got worse this month with the disclosure that the city had investigated Hynes’s use of forfeiture funds. The probe focused on 6,000 subpoenaed emails exchanged among Hynes, a judge, a consultant, and others in the 18 months before the election.

The Department of Investigation concluded that there was evidence he was using his official email account for campaigning. It also found the consultant—on the books as working for the Brooklyn DA press office—actually had been paid $200,000 to advise his campaign.

In one email to the judge, Hynes attacked the accuracy of a newspaper op-ed piece titled “Dump Hynes.” Referring to the editorial’s author, Hynes wrote, “Lying is his thing.” In another, he wrote the judge while preparing for a debate, asking, “How does this look for an opening statement?”

There was also this missive to Mario Cuomo boasting how he expected to beat Thompson: “Thank you Governor for your support for my campaign. I look forward to our lunch sometime in September after I beat this Turkey. Fondly, Joe.”