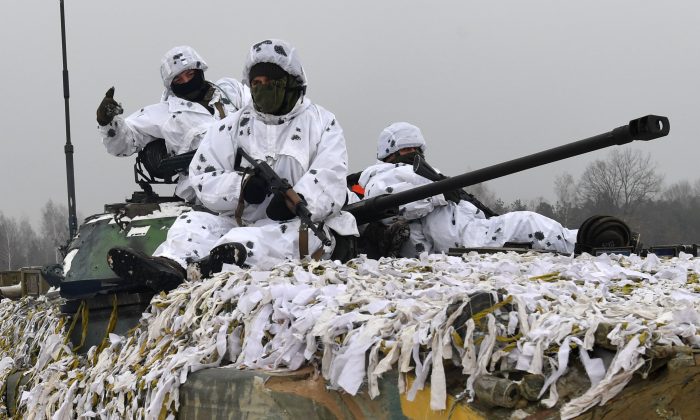 Once Again the Pain of Ukraine

Back to plague the United States, NATO, and Europe generally with the conundrum of how to address blatant Russian aggression against Ukraine (the seizure of the Crimea) without direct, bloody confrontation with Moscow? And how to address more adroit Russian incursions of “little green men” militia and anti-Kiev militants’ territorial seizures of eastern Ukraine that are designed to destabilize Ukraine’s government and society?

Ever since Crimea’s seizure, the West has responded with its normal half and quarter measures of censure: flaccid UN condemnations, feeble sanctions, trivial nonlethal and/or “defense” military material. The result has been grinding, “reloading break” ceasefires along lines of engagement allowing the West respite to address more proximate issues such as winding down Syria’s civil war, halting Yemen’s military/humanitarian crisis, and pinning blame on whomever for killing Saudi/Washington Post journalist Jamal Khashoggi.

As usually is the case in Ukraine-Russia contretemps, there are “he said; he said” elements. The Kerch Strait is the Black Sea’s only entrance to the Azov Sea and provides the only access to two highly important Ukrainian ports (Mariupol and Berdiansk). Ukraine claims access to the Strait and Azov Sea under the 1982 Law of the Sea Convention and, subsequently, a bilateral Ukraine-Russia agreement for shared access.

Since seizing Crimea, however, Moscow has demanded inspection rights to for all vessels heading through the Strait. Hence, the Nov. 25 encounter in which Moscow claims Ukraine provocatively violated Russian waters and rejected escort. Ukraine claims its vessels were in international waters, announced their presence, and, subsequently, to prove its case, provided geolocations for its vessels.

In any event, after a tense multi-hour confrontation, a Russian warship rammed the Ukrainian tug and seized two other Ukrainian naval vessels—thus generating the current crisis.

Then on Nov. 28, Poroshenko declared martial law for one month; banned entry of Russian males of military age from entering Ukraine (no more “little green men” militias); and on Dec. 3 mobilized reservists, ostensibly to counter threat of Russian invasion.

To a degree these actions are Poroshenko posturing. He faces re-election in March with approval ratings reportedly in single digits. High decibel “rally-round-the-flag” rhetoric may be designed to boost popularity.

Certainly, Poroshenko wants NATO to pull Ukraine’s chestnuts out of the fire. It is disconcerting to an outside observer that Ukrainian naval vessels didn’t resist, but simply rolled over to Russian aggression. If they had been no larger than rowboats, they should have resisted ferociously—if only to demonstrate Ukrainians are not craven.

More substantively, on Nov. 29, President Trump cancelled a meeting with Russian President Putin scheduled for the sidelines of the G-20 summit in Buenos Aires. Brushing off charges the cancellation connected with ongoing investigations of Russian interference in the 2016 presidential election, Trump said Russian aggression against Ukraine was “the sole reason” for cancellation.

Then on Dec. 4, NATO foreign ministers met—and punted. NATO’s secretary general said, the organization “restated its solidarity” with Ukraine, but needed more time to devise a plan of action.

Essentially, why here and why now? What is Putin’s objective in shaking the Ukraine box? And how should the West react?

It is, however, feckless to attempt to divine Putin’s motives and objectives. He marches to his own drummer, deciding to be disrupter or conciliator at choice.

We must be prepared to assist Ukraine stability at this juncture.