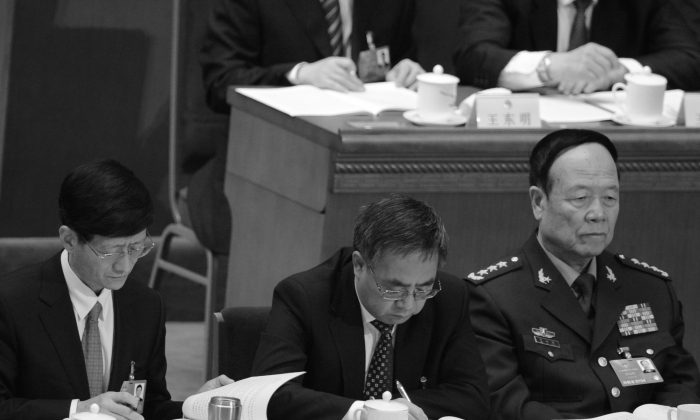 As the former vice chairman of the Chinese Communist Party (CCP)’s Central Military Commission, Guo Boxiong wielded great power. Now, purged and imprisoned, he has become suicidal, according to a report in a Hong Kong-based magazine.

Guo was a trusted ally of former Chinese Communist Party leader Jiang Zemin. With Guo as his supporter, Jiang was able to retain his position as chairman of the Central Military Commission for two more years after he had retired as Party leader in 2002.

Jiang was a coldblooded leader who use violent tactics to ensure his power: he supported the crackdown on student democracy activists during the Tiananmen Square massacre and launched a nationwide genocide to eliminate adherents of the Falun Gong spiritual practice.

While Guo had Jiang as his political patron, he took bribes to grant promotions and military posts, and got kickbacks when the state purchased military goods.

All this led to his downfall. In July 2016, he was sentenced to life imprisonment for corruption.

After all, current leader Xi Jinping is in a political tug-of-war with Jiang and those still loyal to him. As part of Xi’s anti-corruption campaign, he has taken down Guo and many other high-level generals in the military who are part of Jiang’s faction.

Now in prison, Guo’s life is in stark contrast to the high-flying lifestyle he once had.

A recent story in the Hong Kong magazine Chengming reported that Guo Boxiong has attempted suicide while in prison. Chengming has often broken important stories about the Communist Party elite in China, but also runs some stories that can’t be corroborated.

Earlier in March, Guo was given permission to spend recreation time at an open field in the Beijing suburbs belonging to the air force.

While strolling around, Guo suddenly rushed toward the street and headed straight for a nearby lamppost, smashing his head repeatedly. He was sent to a hospital, where medical staff discovered his skull was fractured. He was in a coma for two weeks, and returned to prison in mid-June after treatment.

Even when he was awaiting trial in 2015, Guo seemed to be suicidal. On Aug. 12, 2015, during a break session in court, Guo ran toward a window and attempted to jump out, according to the Chengming report. He ended up injuring his head and had to get stitches and stay in the hospital for half a month.

In October that year, he requested painkillers from his guards, saying that he was in pain. While guards went to consult the doctor, Guo used towels in his cell to form a rope around his neck. He pulled on the rope tightly and lost consciousness. He was again sent to a hospital for emergency treatment.

A month later, Guo attempted to bite off his tongue one morning while having breakfast. His hospitalization afterward resulted in his next court session getting postponed.