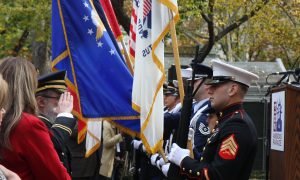 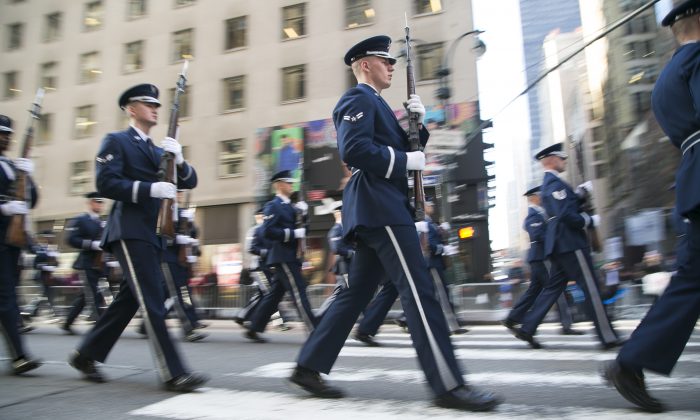 On Veterans Day, A Chance to Record War Experience for Posterity

NEW YORK—Bernard Hall wiped away tears as he recalled the first day he arrived in Korea for the conflict known as the Korean War.

At the age of 17, he enlisted in the Army. “I was playing hooky at school,” Hall said, now 79. His parents told him to either find a job, or go into the military. “‘You’re not going to hang out in the streets and get into trouble,'” Hall’s parents told him.

Hall and his friends decided on the latter, since they didn’t have special job skills. They never thought that they would get deployed to Korea.

It was March 1952, early morning. Hall was looking out at the hills in front of him, fascinated by the sights of a country he had never been to before. That was when he heard a sniper rifle go off.

“I heard something hit the ground, ping,” said Hall. “Someone said, ‘get behind the bunker!’ The guy told me I just got sniped at.”

Many years have since passed, but the incident stuck with Hall. “Here is a man trying to kill me. We never met. We never had an argument.”

Reflecting on the experience, Hall became overwhelmed with emotion.

“Who conditioned our minds to want to slay one another? We could’ve been the best of friends.”

Hall was among a small group of veterans who attended a workshop at the Flushing Town Hall in Queens on Tuesday, organized by the Library of Congress’ Veterans History Project. The initiative, established by Congress in 2000, seeks to collect and preserve the stories of war veterans through oral testimony and archival documents.

Erica Fugger, an oral historian at Columbia University who is also a workshop instructor with the project, said it is the largest oral history archive in the whole country. Over 68,000 veterans have contributed materials to the project. Staff have featured 7,000 veterans’ stories on their website. The rest is kept at the Library of Congress in Washington, D.C., for the public to peruse.

Workshops are conducted throughout the country during the year, through community organizations that reach out to the project. The workshops teach attendees how to conduct interviews that best elicit the veteran’s recollections of their experiences, while remaining respectful to the person’s desire to tell his own narrative.

The project hopes to preserve the veterans’ stories so later generations can understand the realities of the war experience. “These are personal histories that are beyond what’s taught in the textbooks,” Fugger told the workshop attendees.

Oftentimes, the workshops also allow older veterans to connect with soldiers who have just returned from war. “It gives them [veterans] a space for reflection and healing,” Fugger said.

Currently, the project is focused on collecting more stories from veterans of World War II and the Vietnam War. The project wants to collect their experiences, in their own words.

For Hall, he still appreciates his time serving in the Korean War. The experience prompted him to search for the meaning of death, life, and the universe.

“I wish people would search into the mysteries of life, find out about it. Don’t accept what somebody tells you, because there’s so much out there to learn, and it’s beautiful,” Hall said.

CORRECTION: A previous version of this article inaccurately stated the focus of the Library of Congress’ Veterans History Project. The project is focused on collecting more stories about World War II and the Vietnam War veterans. Epoch Times regrets the error.