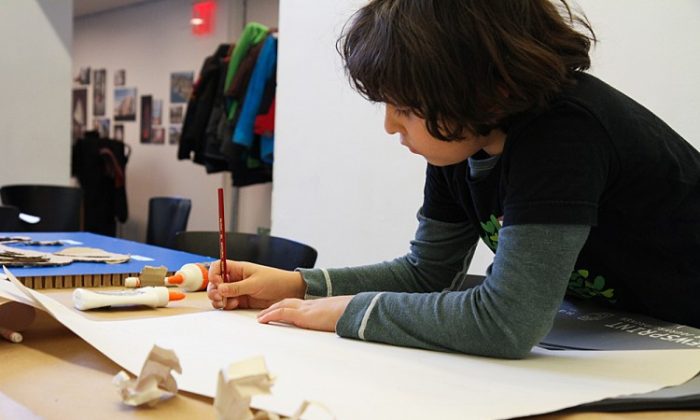 Zubin (Grade four) helps his brother Avi (Grade three) add a bridge on the island they created together. . (Benjamin Chasteen/The Epoch Times)
US

NEW YORK—Light filters from the glass facade diagonally downward two levels into a room where children are busy designing islands.

The three-day course, Design Your Own Island, began on Tuesday, during a student vacation week. Tim Hayduk, lead design educator for the Center for Architecture Foundation, an educational nonprofit that conducts programs both inside and outside of school, conceived the course, partly inspired by “the delicate terrain” on Deer Island, Maine during a trip.

Hayduk said another “part of it came out of the idea that some kids get to go away for break and some don’t.”

Hayduk was concerned the academic portion of the course—including discussing contours on topographical maps—may be a bit too much.

Yet, at least one youth got it.

Sophie and Sophia, classmates at the country school, sat next to Julia. They were working on putting their individual islands together to make a mega island dubbed JSS.

“It’s really getting them to use their brains in a different way than their used at school,” said Eveline Chang, program and marketing director at the foundation.

The children looked like they were enjoying themselves, cutting shapes out of cardboard, gluing them together, and making color sketches into a reality.

Another budding island designer, Theo, a third-grader from PS 116, proudly pointed out the three islands he created. “So people could canoe from one to another,” he explained. When asked if making islands out of cardboard is better than school, he nodded his head.

“This,” he declared, “is funner and better.”

Hayduk plans to progressively introduce new information to the 18 youth, grades three through five. They will visit the Natural History Museum on Wednesday to study biodiversity, including the ocean, coral reefs, and islands in the Caribbean.

“I think that’s going to be a nice introduction to what grows on the island,” said Hayduk, “and what it looks like.”

The children will design a resort for their islands. Eco-friendly principles such using renewable energy, reducing water use, and using local building materials, will be discussed, along with connections to New York City, such as living in a small space, and waste issues.

Then, the children will develop a sustainability plan for their resorts. “That’s when we’ll see how green their thinking is,” said Hayduk, smiling.