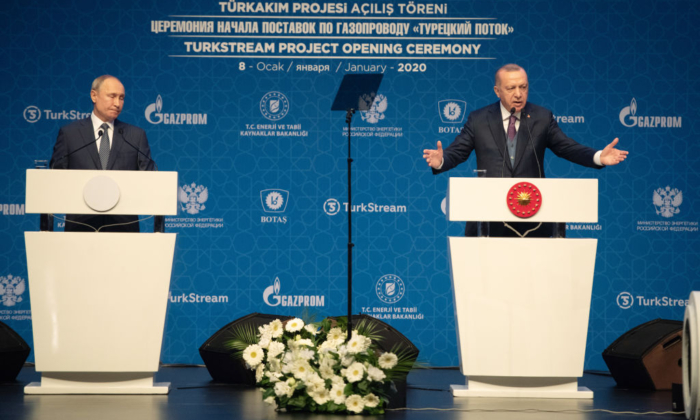 Turkey has proven adept at maintaining neutrality in regards to the conflict between Russia and Ukraine. While Ankara has condemned Russia’s “special military operation,” it has also declined to follow the lead of its NATO allies in supporting US-led sanctions on Moscow. According to local experts, its reasons for doing so are both economic and political, and reflect Turkey’s varied approach to its relations with Russia.

“Turkey is a neighbor to both countries, with whom it has intense economic relations,” Halil Akinci, who served as Turkey’s ambassador to Russia from 2008 to 2010, told The Epoch Times. “So it’s in Ankara’s interest to stay on good terms with them both.”

Neutrality, he added, also left Turkey in the perfect position to mediate—thus raising its international profile—“since we’re the only ones acceptable to both sides.”

When the Russian operation first began on Feb. 24, Turkish officials condemned it as “unacceptable” and a “violation of international law.” They were also quick to stress, however, that Ankara—unlike its NATO allies—had no intention of enforcing US-led sanctions on Russia.

Prof. Dr. Mehmet Seyfettin Erol, a political analyst and head of the Ankara Center for Crisis and Policy, an independent think-tank, said Turkey had “reasonable grounds” for declining to support sanctions.

“Turkey is positioning itself as a mediator by keeping communication channels open with Russia,” Erol told The Epoch Times. He went on to assert that Ankara and Moscow were closely engaged on a broad range of issues based on principles of “cooperation and competition.”

Akinci, when asked if Turkey was subject to pressure by NATO to adopt a harder line against Russia, said no one could reasonably expect Ankara to enforce sanctions —especially given current economic realities.

“Because of its massive trade dependence on Russia, Turkey isn’t in a position to do this [i.e., enforce sanctions],” he said. “Like the rest of the world, Turkey simply cannot ignore Russia’s vast natural resources.”

Indeed, an estimated 45 percent of Turkey’s natural gas imports currently derive from Russia, along with more than 75 percent of its imported wheat. This represents a dire situation for a country that has seen its currency lose more than 80 percent of its value year-on-year, causing the prices of many staple commodities—including bread—to skyrocket.

At the same time, Turkey has significant trade relations with Ukraine, which supplies it with another 10 to 15 percent of its total wheat imports. Ankara and Kyiv also cooperate in the defense-industries field, including the joint manufacture of aerial drones.

Turkish neutrality may be economically expedient, but it has also served to raise the country’s profile by positing it as the ideal mediator—a role it has assumed with gusto. On March 10, the Russian and Ukrainian foreign ministers met in Turkey’s resort city of Antalya; and on March 29, delegations from both countries held talks in Istanbul. Although hailed by all sides as “constructive,” the talks failed to produce any tangible breakthroughs.

Russia, for its part, which appears to have the upper hand militarily, demands guarantees that Ukraine will never join NATO. It also demands Kyiv’s recognition of Russian sovereignty over Crimea (annexed by Russia in 2014), and recognition of two Russian-speaking territories in Ukraine’s eastern Donbas region (Donetsk and Luhasnk) as independent republics.

Based on recent signals from both camps, Erol believes it is likely that Ukraine will “give up on NATO membership first, and Moscow will accept Ukraine’s European Union membership in return.” The main sticking point, he believes, is the Donbas region. “Russia demands recognition of the so-called republics, but the Kyiv administration and the international community do not seem to accept this,” he said.

Because it involves major power players like Russia and NATO, the conflict could become a long-simmering “proxy war” lasting “months or even years,” Erol warned, citing past Russian entanglements in Afghanistan and Chechnya.

Akinci agreed that reaching a negotiated settlement “could take a long time.” He added, however, that if the military equation were to change significantly on the ground, “[diplomatic] positions could change as well.”

In the meantime, Turkish President Recep Tayyip Erdogan has extended an open invitation to both Russian President Vladimir Putin and his Ukrainian counterpart Volodymyr Zelenskyy to meet in Istanbul for further talks. “I wholeheartedly believe that a peaceful solution can be found through dialogue,” he said on April 18. Three days later, Russian forces reportedly captured the Ukrainian city of Mariupol.

Ties With Russia: ‘Not Black and White’

Historical rivals, the Ottoman (i.e., Turkish) and Russian empires fought at least a dozen major conflicts over four centuries, ending with the First World War. But today, Turkey, despite its 70-year-old membership in NATO, is keen to remain on good terms with Russia, with which it shares a substantial maritime border in the Black Sea.

Turkey-Russia relations bottomed out in late 2015, when a Turkish F-16 shot down a Russian Sukhoi fighter near Turkey’s tense border with Syria. But relations quickly recovered the following year, especially after a failed coup attempt against Erdogan’s government, for which Ankara blamed Fetullah Gulen, a US-based Turkish-Muslim preacher who claims to have an international following.

Washington’s refusal to extradite Gulen to Turkey then led to a rupture in US-Turkey ties and a concurrent improvement in Ankara’s relations with Moscow.

“This, in turn, led [Erdogan’s] ruling Justice and Development Party to ally itself with nationalist and Eurasianist elements who favor closer ties with Russia, China and Iran,” Uzgel, a former professor of international relations, added. “This combination of external and domestic factors prompted Ankara’s subsequent ‘tilt’ towards Moscow.”

In 2017, Turkey went so far as to announce the purchase of an advanced S-400 missile-defense system from Russia. The move infuriated Turkey’s NATO allies and eventually resulted in limited US sanctions being imposed on Turkey itself.

In explaining Ankara’s eclectic approach to Moscow, Akinci stressed that, at least with respect to the Middle East, Turkey’s differences with the US “are actually deeper” than those with Russia.

“For example, our American allies have nurtured, and continue to support, an organization opposed to Turkey’s territorial integrity,” he said.

Here he was referring to the militant Kurdistan Workers’ Party (PKK), the Syrian branch of which the US has backed in its war against Assad, but which Ankara views as a terrorist group. “In this case, US policy actually poses a greater danger to Turkey than anything the Russians are doing,” Akinci asserted.

He added: “Every state has its differences with Russia and every state has interests in common with Russia. In some areas, the US and Russia get along quite well; in others, they do not. Geopolitics is never black and white.”