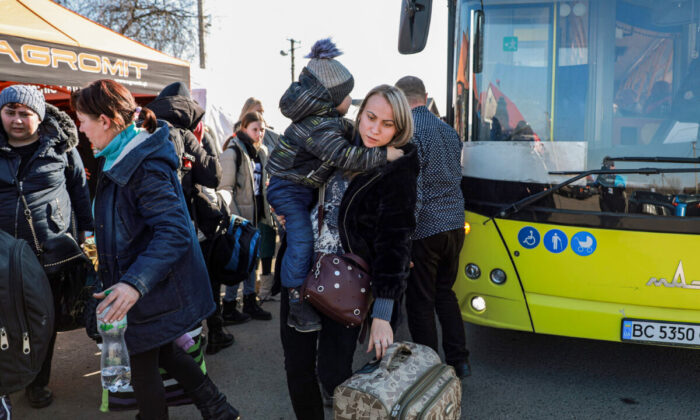 On Ukraine-Poland Border, Aid Floods in as Refugees Flee

A border crossing tracker has eased pressure, but many inbound aid vehicles are backed up for hours
By Ivan Pentchoukov

SHEHYNI, Ukraine—The line of Ukrainian refugees at the Shehyni–Medyka border crossing to Poland was much shorter on March 13 than the rush seen here in the first 10 days after Russia’s invasion.

A crowd of mostly women and children, many of whom had traveled for days from hard-hit cities in eastern Ukraine, waited quietly in a line that stretched past a row of kiosks selling food and trading currency.

One million refugees fled Ukraine in the first week of the war, which started on Feb. 24; more than 1.8 million left between March 3 and March 14.

While the overall flow of refugees from Ukraine to neighboring countries hasn’t subsided since Russia invaded, border crossings are less chaotic now that Ukrainian officials and volunteers have become more efficient at distributing the crowds over multiple crossings.

To direct the flow, dispatchers in transportation hubs in Lviv, Ukraine, use a live database to track wait times for vehicles and foot traffic at 25 ports of entry into Poland, Slovakia, Romania, Hungary, and Moldova.

At the tail end of the line in Shehyni, Ukraine, buses from Lviv arrive at a steady pace to drop off passengers, who then spend around three hours inching their way to the pedestrian gate into the Polish passport control facility.

Valeriya Batalova, a Ukrainian citizen living in Chicago, was aboard one of the buses waiting to cross into Poland. She had traveled to visit her sick grandfather in Sumy, Ukraine, two days before the war started. Sumy—which sits just 22 miles from the Russian border—and its surrounding areas were besieged from the first day of the invasion.

“I spent the night with my granddad, then I woke up and there’s a war,” Batalova told The Epoch Times. “It was a very scary moment.”

“The most difficult moment was when me and my grandpa were walking on the bridge, and you know they are bombing the bridges, so it was very scary. Actually, every night is scary,” she said.

Batalova, who has been trying to get out of the country ever since, finally made it to the border after three days of traveling. During the first part of the journey, the vehicle she traveled in drove on small country roads to avoid Russian forces.

Across the border in Medyka, Poland, a makeshift camp of tents and tables set up by volunteers and humanitarian workers buzzes with activity throughout the day. The refugees pick up food, clothes, and other necessities, and board shuttle buses to travel further into Poland.

While there’s no line at the pedestrian entry into Ukraine from Poland, the port of entry line of vehicles stretches several miles as volunteers in trucks and vans packed with food and supplies wait—it takes five to six hours to get across.

Alternatives to the north and south of Medyka are available, but the detours can be hours longer than the wait. Adrian Briss, a Polish real estate agent, was in line inside a van marked with red crosses about a half-mile from the Poland–Ukraine border checkpoint in Medyka on March 12. The drivers at this point in the line have waited for three hours, with two more hours to go just to cross the border.

Briss was heading to Ukraine to shuttle women and children from the train station in Lviv to the Polish border. On the way to Ukraine, he picked up a woman returning to her husband in Lviv. She had spent a few days in Poland amid the war to see her newborn grandson.

Briss’s friend, Marius, drove a cargo van that was half-loaded with food and supplies bound for Lviv. Two Ukrainian men, a stepfather and son, hitched a ride in the front seat to return to their country and enlist for the war. The son, Vova Shevchuk, 22, was working at a factory in Poland for a month before deciding to return home.

“As for me, now is not the time to work. We need to go home and defend the country. I didn’t serve in the army. If they take me, I’ll go,” Shevchuk told The Epoch Times.

The sun set as the vehicles inched forward. Briss made a few calls and opted to drive to another border crossing rather than spending three more hours in line. The two vans raced south on mountain roads to the Kroscienko border crossing, where the line was just a few cars long. The reason became apparent after crossing the border. The first hour from there on the road to Lviv was a mix of giant potholes and cracks, interspersed with patches where asphalt gives way to dirt and rocks.

Briss said he’s making the trip on his own time and at his own expense. He had crossed once a week earlier, but had a difficult time getting past the border guards because he didn’t bring the proper paperwork. On that first trip, he fit 12 women and children into his seven-seat van. Before they departed, another woman begged to get on; Briss had to decline but assured her he would be back in six days. She asked for his phone number and said she would wait.

The children cried during the entire ride to Poland, but quietly, too exhausted to make much noise, he said.

“They were all very weak. They all cried, the women and the children. It’s impossible not to be moved by it,” Briss told The Epoch Times.

This time, Briss, who has volunteered as a mountain rescue worker for three decades, said he planned to shuttle refugees between Lviv and Poland for four to five days before returning home.

Just ahead of Briss, Steve Parker from Essex, England, had just cleared customs at the Ukraine border with a convoy of commercial vans packed with aid. Parker served in the Bosnian war in the ’90s and witnessed the devastation such conflicts have on families, children, and soldiers. He told a few friends that he intended to put together some aid and get to Ukraine.

Within a week, his community came together to fill 16 vehicles with 35 tons of food, medical supplies, and other aid.

“The people in the UK are very generous people. They’re very heartwarming people. They don’t like seeing suffering across any part of the world. This has brought tears to the people that I live with, my friends, my friends’ families, and so on,” Parker said.

After six hours in two border lines, Briss drove into Ukraine, cheering along with the woman from Ukraine. Minutes later, they grew somber as Ukrainian soldiers flagged down the car at a road checkpoint, which the locals call block posts. After about a dozen more checkpoints and a two-hour drive, Briss’s convoy arrived in Lviv.