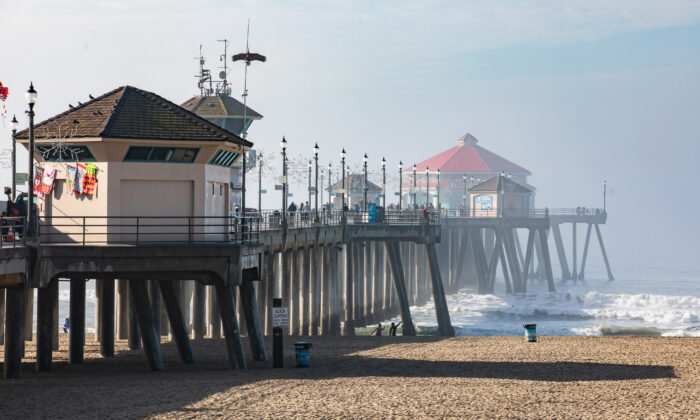 On This Day in Orange County History

“On this day in history” has been a fun way to bring past events into contemporary conversations. During my eight years as an Orange County Supervisor, every fifth Board meeting or so, I would be asked to lead the Pledge of Allegiance. I would always start off with something of national import that occurred on that very day during our nation’s history. For example, for September 9th one could state, “On this day in history, in 1850, California became the 31st state admitted into the Union.”

On May 24th, two very important events occurred on this day in history in 1920. A significant inflection point in Orange County’s history occurred with the first oil well to prove the Huntington Beach Oil Field was a viable source of oil. It was struck near the intersection of Goldenwest and Clay.

At the nearby Discovery Well Park, which was dedicated twenty years ago today, the relocated landmark plaque commemorates this historic event, one that dramatically changed the city of Huntington Beach and Orange County literally overnight.

By coincidence, although formed in 1919, the very first official meeting of the Orange County Historical Society also occurred on this day in history, 102 years ago.

In September of 2019, celebrating the centennial of this organization, a dinner gala was held and renowned local historian, author, friend and former Orange County archivist, Phil Brigandi, provided an eloquent account of the previous century. It was probably his last oration. Orange County would lose this amazing individual due to complications from a heart attack a few months later.

I should disclose that I served on the Costa Mesa Historical Society Board of Directors in the early 1990’s and am a lifetime member. I’m a lifetime member of the Orange County Historical Society and served as Vice Chair of the California Sesquicentennial Foundation Board of Directors, being the only original Board member from Southern California. To say I’m a California and Orange County history nut would be an understatement.

In 2014, in my final year as County Supervisor, I instigated the commemoration of the 125th anniversary, the quasquicentennial, of Orange County’s separation from Los Angeles County in 1889, becoming its own county.

This past March, I spoke to the Old County Courthouse Museum Society. It was great to be back in the Civic Center and at California State Historical Landmark No. 837. It was one of the first state landmarks in my lifelong pursuit to visit and photograph them all. For the topic of my talk, check out “Orange Countiana Vol. VIII.”

The Orange County Old Courthouse, put into service in 1901, holds the priceless Orange County Archives. It was great to revisit this well managed treasure that is under the management of Orange County Clerk-Recorder Hugh Nguyen. It is frequently visited and well used by historians and other members of the public working on projects and doing research.

Orange County’s archivist activities are amazing and first rate. These publicly accessible archives contain not just one-of-a-kind records documenting every branch of county government, but also countless early photos and maps, and the papers of many important historic figures like the Knott family. One can see Phil Brigandi’s fingerprints everywhere.

Whenever you get into a “Huell Howser” moment, have a couple of hours, and want to visit a special gem during normal business hours, you’ve got to visit the Old County Courthouse in downtown Santa Ana. If you really want to see something fun, visit it on Valentine’s Day. You’ll observe numerous couples tying the knot and keeping the location buzzing. And if you’re a movie buff, then you may have seen this granite and sandstone building in many memorable films.

Speaking of my old friend Huell Howser, who served on the California Sesquicentennial Commission, when he did a program on downtown Orange, Phil Brigandi was his guide. When I brought Huell to the Old County Courthouse in the mid-1990’s he was warmly greeted by Orange County’s many active historians and museum docents. I miss him, but I can still hear him say, “That’s amazing!”

I recently did lunch with Tony Gonzalez, a dear friend, and president of the California Historical Society Board of Directors, who flew into John Wayne Airport for us to discuss doing a fall reception for this statewide organization here in Orange County. Hosting it at an Orange County residence was the request, but the Old County Courthouse would make for a perfect venue for this statewide, San Francisco-headquartered, organization’s local supporters.

As one of the state’s 58 counties, Orange County has been blessed with many wonderful local historians. Besides Phil Brigandi, add Martin Brower, Esther Cramer, Chris Epting, Leo Friis, Rob Richardson, Jim Sleeper, John Sorenson, Doris Walker, and many others to the list.

Maintaining a best-of-class archives is a must for Orange County citizens, now and in the future. I commend Clerk-Recorder Hugh Nguyen and the Board of Supervisors for making it a high priority. Future generations will thank you. And history aficionados like myself will continue to be most grateful.