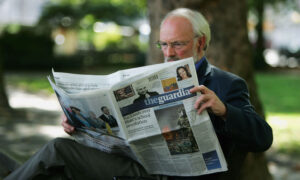 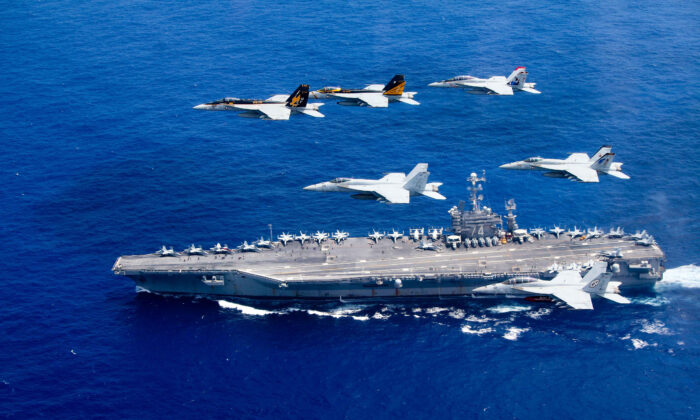 In this handout provided by the U.S. Navy, a combined formation of aircraft from pass in formation above the Nimitz-class aircraft carrier USS John C. Stennis. (Lt. Steve Smith/U.S. Navy via Getty Images)
Viewpoints

On the World Stage, America Is Being Tested

It has not taken long for America’s rivals and enemies to test the new American regime.

In the Obama years, China had suborned the World Health Organization, ignored many of the requirements of the World Trade Organization, manipulated its currency, dumped cheap goods despite various trade agreements, flexed its muscles in purporting to turn shoals into Chinese islands staking out the South China Sea as national rather than international waters, and began saber-rattling in respect of Taiwan.

In focusing on Chinese industrial and scientific espionage, the abuse of the Confucius Institutes and of many Chinese student activities at American universities, and on its abusive trade practices, President Trump on this one issue rallied bipartisan support and gained substantial international agreement, especially from China’s neighbors, led by Japan, India, Australia, Vietnam, and Indonesia.

Iran had eagerly accepted Obama’s end of sanctions and a ten-year period in which it would not deploy nuclear warheads on missiles but would continue to conduct research to do so, according to an unrigorous schedule of inspection. And North Korea regularly fired missiles over Japan and loudly and randomly threatened the use of nuclear weapons.

Trump withdrew from the shameful nuclear agreement with Iran (Joint Comprehensive Plan of Action-JCPOA), and almost strangled that country with renewed sanctions. It ran out of funding for its terrorist protégés: Hamas in Gaza, Hezbollah in Lebanon, and the Houthi in Yemen.

Trump’s two meetings with North Korean leader Kim Jong-un certainly improved the atmosphere and ended North Korean provocations and appeared to slow its nuclear program, but the goal of a nuclear-free Korean Peninsula and a permanent and verifiable renunciation of nuclear weapons by North Korea has not occurred, and will not in these circumstances.

Now China is jubilantly buying Iranian oil and thumbing its nose at American sanctions, and the Iranians have responded by resuming ample funding to their terrorist protégés in the Middle East, most conspicuously the Iranian-sponsored Hamas attack on Israel paid for by Chinese purchases of oil from Iran.

The American reaction so far, has been the traditional Democratic practice of perfectly even-handed treatment, as if the parties were of equal legitimacy and moral weight, while the Jewish state of Israel is responding to an unprovoked hail of thousands of rockets on populated areas from the Hamas terrorists in the Gaza Strip.

Particularly worrisome is the computer hacking of the major southeastern oil pipeline that left 80 percent of the gas stations in the District of Columbia and about 60 percent of those in Atlanta closed for a week.

President Biden has acknowledged that it was a Russian hacker but has credulously accepted Russian President Putin’s assertion that his government knew nothing about it, and has acquiesced in a blackmail bribe paid by that company to the cyber-terrorists.

No serious person could believe that the Russian government had no knowledge of hackers within Russia striking such a heavy blow at the United States.

In the Middle East, the Trump administration managed greater progress toward peace between Israel and the Arab powers than any administration since that of President Carter and the Camp David agreement of 1978.

As the ancient foes of the Arabs, the Turks and the Persians (Iran), encroached simultaneously upon the Arab world, there was a general recognition that Israel was now more naturally an Arab ally than an enemy. The Arab world was never particularly fond of the Palestinians. But it was convenient for decades for the Arab governments to distract the Arab masses, the so-called Arab street, from the misgovernment inflicted upon them by whipping up sentiment about the heinous treatment of the Palestinians by the Israelis.

In these changed circumstances, which the Trump administration exploited very effectively, the Jews and Arabs were natural co-resisters against the Turks and the Iranians.

To an extent, the Trump administration, in championing the opening of relations between Israel and the Gulf states and a remarkable warming of relations between Israel and Saudi Arabia, was making the most out of the difficulties created by the European Union’s mindless and prolonged snub of Turkey, and the Carter administration easing the way for the Khomeini revolution in Iran by, in the words of Carter’s national security advisor, Zbigniew Brzezinski, “throwing the Shah out like a dead mouse.”

The West is paying for both those policy disasters, but at least the Trump administration managed to patch together Israeli-Arab relations in consequence of them.

There have only been half-hearted demonstrations on behalf of the Palestinians in Jordan (where there is a Palestinian majority), and in Morocco and a few other places.

But the Palestinian leadership have overplayed their hand for years. They never wanted peace because that would have resulted in their leading just another dusty little country with no oil and ceasing to be among the most prominent personalities in the world, which the odious Yasser Arafat, PLO leader, was for decades.

The mistaken Democratic concept of treating them equally with Israel transformed routine terrorists into megalomaniacs deemed to be of equivalent stature to the State of Israel, who did not understand that they were not being supported for the virtue of their cause but for domestic reasons within the Arab countries and that these reasons evaporated when the Arab powers became less comfortable with Turkey and Iran than they were with Israel, which seeks nothing from the Arabs except peace. Trump ceased to lavish upon the corrupt Palestinian leadership attention it did not deserve.

We will presumably hear a bit more of the pompous liberal nonsense about asymmetrical responses, as if countries when attacked have a duty to respond with equal, rather than greater, force to the attack. On that basis no war would ever reach a victorious conclusion.

The Biden administration has supported Israel’s right to self-defense but is making tedious noises of equal moral relativity: an echo of past Democratic Middle East failures. (Camp David was an agreement with Egyptian president Sadat, not the PLO.)

Of greater interest is what the administration does, in upgrading its own security and in response to Russia, to reduce America’s current seeming vulnerability to a cyber-Pearl Harbor. Israeli premier Netanyahu has promised, with apparently broad support in Israel, to eliminate Iran’s nuclear military capability if the United States does not do so.

Unless Biden and his entourage manage to squander all credibility, the Israelis will flatten Hamas and the Iranian leaders will compromise to renew the JCPOA.

Biden will presumably equip the American Nimitz class carrier task forces with adequate defenses against Russian and Chinese hypersonic missiles and improve air defenses at Guam and other bases as the armed forces have urgently requested. If he does that and remains quietly firm, there is nothing Beijing can do about Taiwan except huff and puff.

The United States hasn’t ceased to be the world’s greatest power in the last four months; it has just ceased to have a credible and coherent administration capable of convincing anyone that it would use its power.

It will not continue in this torpor of woke moral self-mutilation indefinitely, and most countries in the world are already hoping for America to be America, again, if not necessarily in precisely Trumpian terms.

This frail and quavering president who used to muse about beating up Donald Trump in the schoolyard should stop using his bully pulpit to mumble self-deprecations and carry a twig, and start thinking and acting like a president of the United States.