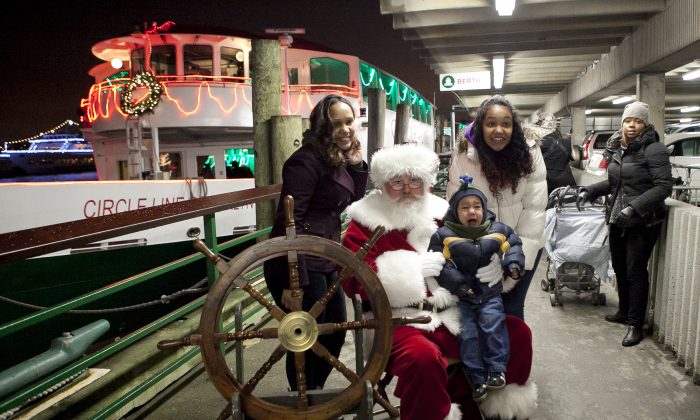 Santa poses with one of the last children in line to a holiday cruise boat at Pier 81 in Manhattan, New York, Dec. 9, 2013. (Samira Bouaou/Epoch Times)
News

On the Water: A Photographer’s Worst Nightmare (+Photos)

A curiosity about New York City living is the locals’ ability to brave horrible weather for a night out on the town. I’ve taken on subzero temperatures to have a bit of fun myself, but none so memorable as a recent experience.

It was freezing cold on Dec. 9, yet there I was on Manhattan’s Pier 81, photographer in tow, trying to get on a boat and take a ride down the Hudson River to see the Statue of Liberty.

The ride was part of a new tradition that Circle Line tour boats and World Yacht started, called the Lighting of the Ships. Several boats of varying sizes, including a tug and a yacht, illuminated their decks with holiday lights and paraded down the Hudson to Lady Liberty. For the inaugural year, the World Yacht vessel hosted people from Friends of Hudson River Park and the Circle Line boat hosted a nonprofit for poor children called Room to Grow.

The atmosphere at the pier was festive and cheerful. The boats turned their holiday lights on and blew their horns as the crowd cheered. Cups of hot cocoa were on hand. A group of dedicated singers belted out Christmas carols while an appropriately portly Santa Claus worked the crowd. My photographer seemed happy with life as she sipped her hot cocoa.

Then we started working.

First, we couldn’t manage to talk our way on to the yacht, as they had run out of space.
Luckily, the fine folks from Room to Grow gave us two tickets and a cheerful invite to “Come party with us!”

We waited on the windy pier for 45 minutes—Santa was holding up the line by taking photos with everyone. We noticed there were scores of small children in line.

On board, there was a buffet of hot dogs, chicken tenders, penne pasta, and green salad.

The children were well behaved and charming in their bright red velvet holiday dresses, freshly combed hair, and sparkly party shoes. The mood was festive as the boat pulled away from the pier. It all seemed fairly serene, so I didn’t worry much after catching sight of the mountains of small, sugary cookies and bountiful cups of coffee. I told myself that we’d be off the boat long before any sugar crashes set in—and most children don’t drink coffee.

Then an 8-year-old turned up at the condiment table with a huge cup.

“It’s decaf,” he said without missing a beat when he saw my concerned expression, and continued to add sugar and half-and-half.

Then I heard the live band with electric guitar players, a drummer, and a singer in a Santa hat cranking up. A cluster of 3-foot-tall children held court at their feet, clutching miniature white tambourines, anticipation on their faces.

Eventually a few of the smaller children in the crowd started to melt down, but mercifully it wasn’t contagious.

All of it was a scene straight from some of my most beloved childhood memories, minus the boat. The great things that make this time of year were all there: food, family, music, special outfits, sugar, and a sort of happy, hysterical, organized chaos.

Somewhere along the way, my photographer had been wandering around the boat taking photos. She’s a consummate professional, so I assumed she was fine. Not quite.

“It’s dark in here and outside, everything is moving and rocking, there are tons of kids everywhere, a band is playing, it’s too hot inside, and it’s freezing cold on the deck,” she said when I finally found her. “The only thing that could be harder than shooting photos in here would be a war zone.”

We survived the boat ride nicely, thanks in large part to our hosts and the excellent parenting skills of the other passengers. We also got a nice view of Manhattan in the mist and the Statue of Liberty lit up. But the real treat was the challenge of maneuvering through a series of surprising circumstances all in pursuit of having a good time.

I’m starting to believe that deep down, no matter the time of year, it’s what every New Yorker craves—on the water and off.