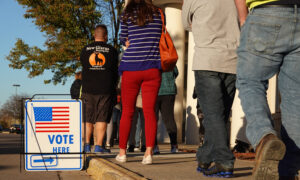 A person watches CNN on her phone in Wilmington, Delaware, on Nov. 6, 2020. (Joe Raedle/Getty Images)
Viewpoints

On the Temper of Our Time: Message, Megaphone, Muzzle, and Muscle

For well over a century, the objective of progressive institutes, public libraries, state schools, popular newspapers, magazines, and film productions has been the total humiliation of any and all opposition to a neo-Marxist “transformation” of America and the West.

Advocates for the spirit of enterprise, patriotism, religious practice, freedom of speech, property rights, and the merits of liberty have been increasingly muted and, given last week’s censorial actions by big tech platforms such as Twitter, Facebook, and Apple, ostensibly silenced.

Given the temper of our times, it’s little wonder that conservative journalists, “scribbling deplorables” so to speak, are so contemptuously dismissed by what Hillsdale College scholar Michael Anton describes as our ruling “Wokerati.”

In the era of the “Woke,” the temptation to censor intellectual opposition has reached pre-totalitarian dimensions.

An epic display of endowment fund contempt for ordinary Americans came in the wake of the 90-minute incursion into the Capitol Building by a tragically undisciplined and over-zealous contingent of  protesters during the massive “Stop the Steal” demonstrations that took place on Jan. 6 in Washington.

As Fox News host Tucker Carlson might agree, one couldn’t find a finer tuned example of “smugness, pomposity, and group-think” from almost any other acolyte of our intersectional aristocracy.

Humiliating cultural opponents is a practise as old as ancient Rome. Big media platforms, almost entirely in the hands of the left, now provide forums for spectacles worthy of comparison with feeding Christians to the lions in the era of Caligula.

Over my short 14 months as an Epoch Times’ contributor, this publication alone has endured at least three aggressively targeted indictments against its reputation.

In August 2019, a rambling NBC hit piece sought to fit just about every conceivable, cancel-culture tested, innuendo about The Epoch Times into a single “investigative” report.

In April 2020, The Canadian Broadcasting Corporation joined the chorus on the American left. The Canadian state-owned media giant published a “news report” about The Epoch Times coverage of the CCP (Chinese Communist Party) virus. The misleading report was thoroughly refuted and the CBC eventually had to admit that their allegations were unfounded.

The third hit came from the New York Times. As usual, the story focused little attention on specific news content and editorials. Guns were aimed primarily at the young paper’s immigrant origins, its corporate organization, promotional strategies, and alleged partisanship. For anyone familiar with the ideological disposition of the “Gray Lady,” the whole report amounted to a case of the pot-calling-the-kettle-black.

Nevertheless, one thing was clear. The New York Times has had just about enough of upstart, out-of-step, Chinese refugees from communism, who, over a short two decades, transformed a small, low-budget newspaper distributed free on the streets of New York into what the New York Times reporter claimed to be a “giant influence machine.”

All things considered, it would never occur to “progressive” journalists that the success of a competing newspaper might have something to do with the widely acknowledged honesty of its reporting and the general appeal of its editorial policy.

The Powerful Components of Propaganda

The silencing of conservative voices has been going on for decades. As early as 1988, Father Richard John Neuhaus predicted that conditions in what he called “the naked public square” were deliberately keeping time-honored religious and traditional values out of our civic conversations and would almost certainly lead to the death of democracy.

More recently, the aforementioned Michael Anton, author of “The Stakes: America at the Point of No Return,” chronicled a distressing endgame to the late Father Richard’s prognostication. In this prescient analysis of contemporary America, our attention is drawn to three interconnected components in the modern media propaganda machine: “narrative, megaphone, and muzzle.”

According to Anton, the “narrative,” or what we once called the “message,” is the “meta-story” that ruling elites insist people accept without question.

By now, we’re all familiar with the core of the narrative: America is racist, sexist, homophobic, xenophobic, Islamophobic, transphobic, and so on. The sins of America derive directly from its Anglo-European founding fathers, who spawned a predatory stock that is inherently exploitative and racist. Everything they own has been stolen from others. They didn’t build anything or earn anything and don’t deserve to keep anything.

However, the well-tutored “Woke” among this “privileged lineage” make a special effort to recognize and atone for the sins of their fathers. “The ruling class, regardless of color,” writes Anton, “seeks to punish the ‘deplorables’ and appeal to ‘diversity’ so long as their redistributionist policies don’t interfere with their own bottom line.” Spending plenty of taxpayer or shareholder money on “wokeness” is regarded as a public virtue.

The “megaphone” is the assortment of instruments through which the content of the narrative is broadcast. It includes newspapers, TV networks, search engines, the film industry, schools, and universities.

The principal megaphone is the legacy-left media, and Anton points out that “Its hard to overstate the importance of the New York Times in pushing the narrative, simply because of its reach, prestige and influence.”

Nearly all mainstream media, and more recently educational institutions, march in lockstep with the New York Times, which is generally recognized as the “assignment editor” for progressive writers around the world.

Where the New York Times leads, the megaphone follows. It determines all the news and opinion that is fit to print. The point is no longer to seek the truth and get the story right; it’s to broadcast the narrative.

The muzzle is a powerful network of progressive media institutions, tech companies, and education systems that increasingly control the news cycle. They can effectively suppress stories that undermine the meta-narrative and promote those which support it.

For example, baseless “Russian collusion” charges against Trump received wall-to-wall coverage throughout the entire life of his administration, while the well-documented alleged Biden family pay-for-play scandals have been entirely suppressed by the legacy media and dominant search engines.

Another form of muzzling is known as “de-platforming,” or effectively silencing sources that are out of sync with the narrative. Say something wrong on social media and you may have your Facebook or Twitter account locked.

In addition, dissident scholars are denied tenure, research grants, and speaking engagements. The price of their non-compliance could also be public shaming or loss of employment. In the corporate world, HR departments tend to be true believers who enforce “Woke” sensibilities to the hilt.

The Coercive Power of ‘Muscle’

Power, in the broadest sense, is the capacity to get your way or achieve what you want. The word is derived from the French verb, pouvoir, “to be able.”

Political scientists point out that there are three main forms of power, “authority, influence, and coercion,” and it’s fair to say that well-ordered, democratic societies should prefer to rely on the first two.

With regard to authority, history has recorded that common people have consented to be governed by both hereditary monarchs and duly elected political leaders, but they’re generally happier to obey when, for whatever reason, they respect the source of command.

In the case of “influence,” citizens are moved to follow cultural and philosophical traditions, as well as rational arguments and scientific inquiry. Given free discourse, they’re open to be persuaded that those who propose to lead them share their values and objectives.

Political coercion, or “muscle,” is always accepted a little more reluctantly, especially among people who have been brought up to value their liberty. People are willing to obey laws understood to be in the best interests of the common good, but are reluctant to support rules and regulations that threaten their freedom or place the interests of one group over another.

Media Violence Must Be Resisted

Tragically for America, over the course of the pandemic, the dominant sources of power have shifted from authority and influence to coercion and violence.

One crucial element blurring the line between influence and coercion is the manipulation of people by means of incomplete and misleading news reporting. Motivating people to act on false or one-sided information is more coercive than it is persuasive. Confounded headlines, fake news, slander and propaganda are forms of media violence designed to dupe readers and secure involuntary compliance.

Over the last four years, the legacy press and social media giants have colluded to misreport, distort, and suppress facts to suit their own political agendas and inflame public opinion. Given that their dishonesty has secured an enormous political reversal in favour of the left, one is loath to believe that organizations such as the New York Times, CBC, or NBC will change their tactics anytime in the near future.

Given the temper of our times and the precarious years that lie ahead, it will be more important than ever for publications like The Epoch Times to stand their ground and provide the honest reporting that is essential to the survival of democracy.

Despite all the setbacks of 2020, this is no time for surrender. In the immortal words of the old English ballad tribute to Scottish privateer Sir Andrew Barton:

“Fight on my men …
I am hurt, but I am not slain;
I’ll lay me down and bleed a-while,
And then I’ll rise and fight again.”

William Brooks is a writer and educator based in Montreal. He currently serves as editor of ”The Civil Conversation” for Canada’s Civitas Society and is an Epoch Times contributor.