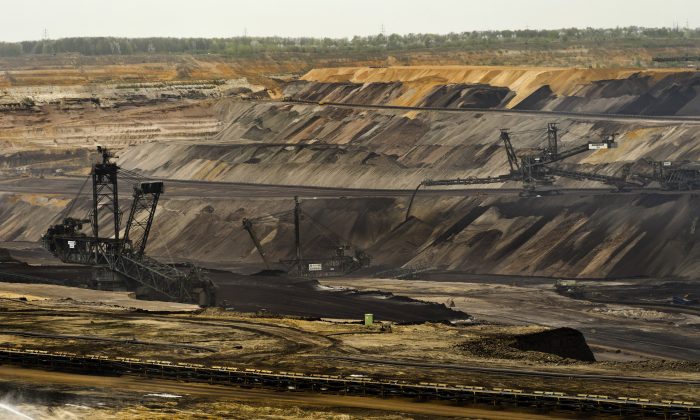 On the Road to Green Energy, Germany Detours on Dirty Coal

This article originally appeared in Yale Environment 360 and is reprinted with permission. Please click here for the original article and more information.

Right at the entrance to the Schwarze Pumpe power station in Brandenburg, Germany, there is an electric car plugged in and ready to go. Ostensibly “green,” this car must be one of the dirtiest in the world. For it is charged using power generated at the plant by burning lignite, one of the world’s most polluting fuels.

This contradiction illustrates a far wider problem in Germany’s pioneering efforts to become the first large industrial nation to run on renewable energy. Behind the millions of solar panels and wind turbines and electric cars, Germany has a dirty secret: its addiction to lignite, also known as brown coal.

In 2011, the main political parties in Angela Merkel’s Germany, the fourth largest economy in the world, agreed on a new policy known as energiewende, meaning energy transition. Its twin centerpieces are an 11-year phase-out of nuclear power plants, in the wake of Japan’s Fukushima disaster earlier that year, and a target of cutting carbon emissions by 80 to 95 percent by mid-century. Under the plan, renewables, predominantly wind and solar, will supply 80 percent of Germany’s electricity and 60 percent of its total energy.

Some say the decision to phase out nuclear power left Germany with one arm tied behind its back.

Is achieving this goal possible, especially given that until recently nuclear was Germany’s main source of low-carbon energy? Pessimists suggest not. They point out that, since the announcement of energiewende, a long, slow decline in carbon emissions of 27 percent between 1990 and 2009 has gone into reverse, with a 4 percent rise in emissions since 2009. But on a visit to Germany last month, I met many NGOs, politicians, and energy academics and professionals who say there is no turning back, and that the targets will be met.

Germany has in the past decade embraced renewables big-time. The country last year got 24 percent of its power from solar and wind — more than any other major industrialized nation. On some sunny weekends, more than a million mini-solar power plants on roofs and land across the country deliver half Germany’s electricity needs. On stormy winter nights, thousands of wind turbines can achieve the same.

“Germany has become a laboratory for finding out how to get a system that works 24 hours a day based on wind and solar,” says Patrick Graichen, director of the environment think tank Agora Energiewende.

Getting this far has undoubtedly been expensive, with investment underpinned by guaranteed prices for renewable power and priority access for that power to the grid. Enthusiasts say that as technology advances, the price of renewables is coming down fast. There is, however, a limit to what solar and wind can contribute, however much capacity is installed. Put simply, there needs to be a back-up for when the sun doesn’t shine and the winds don’t blow. Otherwise the lights go out.

Germany is the first major country in the world to face up to the crucial question of how best to achieve that. And so far, it is doing a dreadful job of it.

The decision to phase out nuclear power has, some argued, left Germany aiming for a low-carbon economy with one arm tied behind its back. Arguably, Germany has further hobbled its chances by so far rejecting technology for capturing and burying carbon emissions from burning fossil fuels. And with fossil fuels still a large part of the fuel mix, the one profiting most from energiewende is the dirtiest — lignite.

German environmental concerns about energy are not just about CO2 emissions. Opposition to nuclear energy in much of Germany runs deep. If anything, Germans are more fearful of nuclear power than climate change. And when the government in 2011 decided to shut eight nuclear power plants and announced that the rest, which still provide 15 percent of the country’s electricity, would be closed by 2022, there was relief that a long and divisive debate was finally over. Germany is very unlikely to change tack now. Meanwhile, the country has turned against the idea, strongly backed in the most recent reports of the Intergovernmental Panel on Climate Change, of burning fossil fuels while capturing their carbon emissions and burying them underground — a nascent technology known as carbon capture and storage (CCS).

German greens are adamantly opposed to CCS, fearing it could be unsafe. They fear that a catastrophic release of the gas from some underground store could suffocate those living nearby and also be a threat to future climate. One official told me that some saw buried CO2 as “almost as dangerous as nuclear waste.” No state government will now countenance the idea of even pipelines carrying CO2 across their land, says Pao-Yu Oei, an infrastructure policy analyst at the Technical University Berlin. The federal government has no appetite to take on that view. In December 2011, the mining and power station conglomerate Vattenfall abandoned plans for a 2-billion-euro pilot plant that could capture CO2 emissions from a lignite-burning power station.

So what are the alternatives for keeping the lights on when renewables cannot do the job? So far, the answer has been lignite, one of the world’s filthiest fossil fuels.

Lignite was the mainstay of power generation in communist East Germany, before Germany was reunified in 1990. Most of the old open-cast mines that once peppered the landscapes of states like Brandenburg, east of Berlin, subsequently shut. But now companies such as Vattenfall are opening new ones, along with new power stations to run on their output.

Lignite burning is higher today than at any time since the 1990s. It generates 26 percent of the nation’s electricity, more than solar and wind combined. No other nation burns so much.

Lignite emits far more CO2 than other fossil fuels — 1,100 grams per kilowatt-hour, compared to between 150 and 430 grams for natural gas. It is the main reason why German CO2 emissions have started rising.

Lignite power plants spew CO2 over long periods when their energy is not needed.

The expansion of lignite is, says Carel Carlowitz Mohn of the European Climate Foundation, “the blind spot of energiewende.” Why this blind spot? One reason is that lignite is cheap and abundant. Existing mines in the Brandenburg area could deliver fuel for 50 or 60 years at least. Another is that the lignite mining and power industry is a rare source of jobs in eastern Germany, the poorest part of the country. “If they dismantled lignite here it would lead to massive social upheaval in the region,” says Wolfgang Krüger, managing director of the Chamber of Commerce in Cottbus, Brandenburg.

A third factor is the reluctance of greens to campaign against it. This seems strange because lignite is pretty much the worse possible fuel to supplement renewables. Its high carbon content is one reason. The other is its inflexibility, which results in lignite power plants spewing CO2 into the atmosphere over long periods when their energy is not even needed.

The fundamental requirement for an energy source designed to be turned to when renewables can’t deliver is that it can be switched on and off quickly. But lignite plants are very slow to switch. Kerstin Schilling, information officer at Vattenfall’s Schwarze Pumpe lignite power plant, said it takes that facility up to eight hours to power up. And constantly flipping the switch cuts the lifetime of its furnaces. So the company tries to keep the plant running at a minimum of 40-per-cent capacity, come rain or shine.

Nobody planned this madness. But it has been the inevitable consequence of a decision to phase out nuclear while failing to restrict lignite burning. “We have two parallel energy systems: renewables and fossil fuels. They no longer fit together,” admitted Jochen Flasbarth, a senior official at the Federal Ministry of the Environment, Nature Conservation, and Nuclear Safety Construction.

There has to be a better way, and there is. It is not nuclear, which as Flasbarth pointed out, would be even slower to turn on and off than lignite. “The nuclear system does not fit with renewables,” said Flasbarth. “It is even less flexible than lignite.”

The obvious alternative back-up option is natural gas. Burning natural gas emits much less CO2 than lignite. Just as important, modern open-cycle gas turbines can be switched on or off in less than 10 minutes. Thus the CO2 emissions from running gas plants on standby to take over if renewables falter is much lower than for lignite.

The trouble is that gas is much more expensive right now than lignite. Again this is not the way it was supposed to be. The European Union’s internal carbon cap-and-trade system was supposed to push up the cost of burning lignite by requiring big CO2 emitters to buy emissions permits, thus closing the price gap between gas and lignite. But the European economic downturn has created a surplus of permits, and their market price has collapsed, says Flasbarth.

Germany aims to cut CO2 emissions by at least 80 percent from 1990 levels by mid-century.

German politicians are in no hurry to halt the lurch to lignite. For one thing, high energy prices are increasingly unpopular among Germans, who already pay three times as much as Americans. For another, a third of the country’s gas comes by pipeline from Vladimir Putin’s Russia, making Germany dependent on a country whose leader is now openly hostile to his western neighbors. Increased dependence does not look like smart geopolitics.

In the long term, as energy systems become smarter, the problem of how to provide electricity when renewables falter may disappear. Rather than having to constantly match supply to fluctuating demand, the hope is that demand can be molded to match fluctuating supply.

Research is going on to perfect ways of storing surplus electricity, which could then be released to the grid when demand exceeds supply. Spare power could be used to manufacture hydrogen from water, for instance, with the energy swiftly recovered later by reversing the process. Or it could also be used to pump water uphill between hydro-electric reservoirs on rivers, and then reclaimed by releasing that water downstream through turbines.

With the right incentives, big but flexible industrial energy users, like refrigeration plants, could also help balance the system by taking their energy at times of surplus. As could the fleets of electric cars likely to be an essential element in a transportation energiewende. They could be left plugged in when parked, ready to absorb or release energy according to the needs of the overall system.

But most of these methods for mass storage of electricity are, for now at least, expensive. Flasbarth says they will only happen on the scale required once renewables get above half total Germany electricity supply sometime in mid-century. Before then, grid extensions — including more international links — can, by moving power around, even out

fluctuations in both supply and demand. Germany can swap its solar and wind power for hydroelectricity from Scandinavia, nuclear power from France, wind from the British Isles, or even Icelandic geothermal energy and North Africa solar power. Grid links with Scandinavia and France already exist.

For now, as the contribution of renewables grows, so, perversely, does that of lignite. German policymakers have yet to resolve what they call this “paradox” of energiewende. They insist, however, that it will be done in time to meet their targets for cutting CO2 emissions — by 55 percent from 1990 levels by 2030, 70 percent by 2040 and at least 80 percent by 2050.

Revolutions are seldom straightforward. Germany is still feeling its way toward a new model for how industrial societies can meet more and more of their energy needs from intermittent renewables.

“We want to be a role model for implementing climate policy while maintaining economic success,” says Andreas Jung, who chairs the Committee on Sustainable Development in the German parliament. “Only then will other countries follow.”

The stakes are high — not just for Germany, but for the world as a whole.