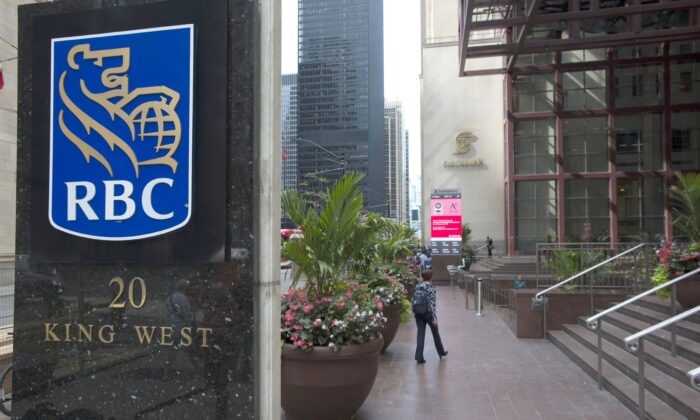 ‘On the Pessimistic Side’: RBC’s Recession Projection Prompts Debate

The Royal Bank of Canada is predicting a short recession in the Canadian economy in 2023, a prediction economists say is not unreasonable but is also not certain.

“Inflation, labour shortages and rising interest rates will drag on Canadian growth, pushing the economy into a moderate contraction in 2023. … Household spending that accelerated out of pandemic lockdowns will slow as higher prices, interest rates and unemployment hit households,” the analysts wrote on July 7.

“This recession will be moderate and short-lived by historical standards—and can be reversed once inflation settles enough for central banks to lower rates.”

No other major banks have projected a recession, according to a comparison by C.D. Howe of forecasts for 2022 and 2023 issued by RBC, the Bank of Montreal (BMO), the Canadian Imperial Bank of Commerce (CIBC), National Bank (NB), Toronto-Dominion Bank (TD), and the Bank of Nova Scotia (BNS).

For the remainder of 2022, BMO projects GDP to fall to zero in the final quarter, and BMO, CIBC, and NB share the lowest GDP growth expectations for the current quarter, Q3, at 1.5, 1.5, and 1.6 percent respectively.

Robert Kavcic, senior economist at BMO, acknowledges that the RBC scenario is possible.

“It’s reasonable, and in fact we have already meaningfully cut our own growth outlook in recent weeks,” he said in an interview.

“While not technically a recession, we have Canadian economic growth effectively stalling around the turn of the year, with real GDP growth very little changed in 2022 Q4 [0 percent] and 2023 Q1 [0.5 percent],” Kavcic explained.

“In other words, we think there is significant risk that the economy does in fact point to a technical recession. If not, it’s clear that real economic growth is at risk of cooling significantly, as interest rates rise, housing activity slows, inflation eats into purchasing power, and businesses turn more cautious.”

Michael Devereux, an economics professor at the University of British Columbia, says RBC’s recession prediction is “on the pessimistic side” without “necessarily being unrealistic.”

“While the current indicators from the Canadian economy are still strong—consumers are spending robustly and firms are hiring and plan to increase production in the near term—there are substantial dark clouds on the horizon,” Devereux told The Epoch Times.

“First, and most importantly, the Bank of Canada is set to raise interest rates by large steps over the next six to nine months, starting next week with what almost every forecaster is saying will be a 75 basis-point jump. This will likely be followed later in the year by another 50 basis points and then one more at the end of the year.”

The sector this will impact the most is the housing market, he notes.

“Mortgage rates are set to go up by whopping amounts, and given the size of mortgage debt in Canada right now, there should be a major dampening of housing demand in the next year or so, which will inevitably slow down economic growth, given the importance of this sector for the overall economy.”

Steve Ambler, an economics professor at Université du Québec à Montréal, says the certainty of a recession is “not an easy question.” However, he sees “two possible mechanisms” that would make the Canadian economy contract.

“First, lots of people bought bigger houses during the pandemic and maxed out their mortgage payments. If they have variable-rate mortgages that aren’t renewable for another four years, they will be facing rising debt servicing costs. They may have to cut back on discretionary spending on other stuff, leading to weaker consumption spending,” Ambler told The Epoch Times.

“Second, the U.S. had a first-quarter of negative growth, and some are [saying they just had] another negative quarter. Negative growth south of the border means weaker export demand,” which would impact Canada.

Bank of Canada moves will also affect whether growth dips into the negative, Ambler notes.

“A rising overnight rate reinforces both effects, via increasing debt service costs and exchange rate appreciation. The latter depends more on how fast the overnight rate goes up relative to the [U.S.] federal funds rate. On the other hand, the faster the federal funds fate goes up, the more likely the U.S. economy is to tip into a recession.”

He adds that high growth in public spending as well as high deficits “are helping to crowd out private investment.”

“We’re in an era of low productivity growth due to very slow innovation and lousy business investment,” Ambler says. “The Liberal government doing its level best to kill off the fossil fuel industry isn’t helping much either.”

The balancing act may be too much to pull off. In a separate analysis for RBC titled “Shrinking runway for a soft landing,” senior economist Josh Nye wrote on July 7, “Recession isn’t inevitable but it’s starting to look as if a lot has to go right for these economies to avoid giving back at least some of the gains made in what has been a historically rapid economic recovery.”

“None of this is certain. The best-case scenario is that the inflationary impulses coming from energy hikes and supply chain blockages will ease off later in the year, and consumer spending gradually cools off so the domestic demand component that is driving inflation deflates by itself, allowing the Bank of Canada to slow down or halt their rate increases,” he explained.

“This is what we call a ‘soft landing.’ One can only hope.”

“The punchline is inflationary pressures control economic growth, because [consumers’] disposable income gets impacted because the cost of everything rises. And so depending on how … that [will] progress in the course of the back half of this year, that can have serious headwinds to economic growth,” Birn said in an interview.

“We have a lot of global uncertainty coming from the Russian invasion, which can also cut economic growth because consumers start holding on to their money, because they feel less confident in spending it all. That can precipitate an economic slowdown. We just don’t spend money, so growth slows.”

In response to an email from The Epoch Times, University of Calgary economics professor Trevor Tombe said neither he nor anyone else has a reliable prognostication.

“I’m afraid I do not have much insight,” he wrote. “It is certainly a concern shared by many, but I tend to think economists are generally poor at forecasting recessions, so don’t put a lot of stock in those reports.”