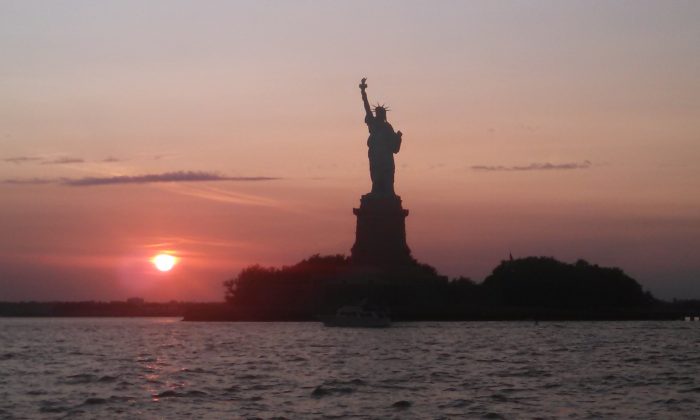 Statue of Liberty taken 2014 at sunset from the AJ Meerwald.
Opinion

On the NJ Waterfront: Taking Liberty

I learned a lot about the old days “On the Waterfront” in NJ from friends who helped create the Hudson River Waterfront Conservancy, tasked with implementing the famous 18 mile Hudson River Walkway. That history is instructive. To anyone with even a passing knowledge of Hudson County politics – the pinnacle of Jersey political corruption – the latest news about Liberty State Park looks exactly like a ham-fisted land grab.

Instead of blight, there is now a Gold Coast, in part because of the creation of the Hudson River Waterfront Walkway and the cleaning up and creation of parks along the Hudson shoreline. While the view has improved, corruption still lingers beneath.  The Mafia playground has morphed into Pay To Play Land. Local politicians with their hands out as well as State Senators like Paul Sarlo (who was all for the LG building destroying views of the Palisades) and State Senator Nick Sacco working hand in glove with developers and casino owners.  Trenton, we have a problem.

The longshoreman’s Hudson waterfront has turned from a gritty dirty Marlon Brando film set or something out of Cinderella Man, to something out of Boardwalk Empire.  Even Braddock Park, named for the famous boxer, is under threat of development.  Hardly blighted anymore except the occasional undeveloped piece, the waterfront is priceless now.  From Edgewater to Bayonne, too many politicians and developers have greedy eyes on it. And apparently, so does the Christie Administration.

Not many remember when the Hudson could be seen from River Road in Edgewater, just a stone’s throw from the GWB, even though it was only 20 years ago.  In fact, the movie Copland was set there. The police HQ in the film was shot right near Edgewater Borough Hall. Not many remember what it used to look like because only locals went down there. You could see the river between Fort Lee and Weehawken, but it only looked pretty at night, with the view of the NYC lights reflecting off the water. You didn’t want to see it in the daytime. It was a mess of muddy, chromium contaminated land with broken chain link fences and piles of broken concrete and asphalt between the road and the dirty water. For atmosphere, the vacant blight was punctuated by the abandoned Alcoa building and massive oil storage tanks.

My very first traffic count while working for the Bergen County Traffic division was at the Veterans Field on River Road in Edgewater.  We were seeing how much traffic was there before the hundreds of new luxury condos were built, before the Gold Coast turned to Gold.  That was also before 21st century politics and corruption would poison that very field.

Edgewater’s Veteran’s Field is just one metaphor for what has happened to the Hudson waterfront.  The field was recently redone, it looked beautiful, but the developer, Diabes, who, according to the locals, runs Edgewater like a modern day Mr. Potter, instead of trucking poisoned soil out, trucked it in. My nephew had played teeball on contaminated dirt. That is how little the NJ developers on the Hudson waterfront care about the public. Just to show you how dysfunctional Edgewater still is, the Mayor just resigned in disgust and the developer who poisoned the children’s playground, just won the contract to clean up the site his company had just contaminated.  They will now be paying Mr. Diabes to uncontaminate the field his company contaminated.

In other places, south of Fort Lee, they are blasting the Palisades to bits, slathering the beautiful rock with ugly gray concrete and chain link fences to protect their new ugly buildings at the base built so tall they obliterate the view of the 200 million year old Palisades cliffs that was just ruined anyway.

Further to the South, in Jersey City, there was recently a hidden clause thrown into State legislation (at the last minute that nobody will own up to), that would rope 1,200 Acre Liberty State Park, which is absolutely nowhere near the Meadowlands, into the Meadowlands Commission, which I need to remind folks, used to be called the Meadowlands Development Commission. Infamous for being corrupt, the Meadowlands is legendary for being the place mobsters routinely buried bodies. The famous Godfather scene where they “Leave the gun, take the cannoli” tells you all you need to know.

Perhaps this is all a game, like we wouldn’t notice that if gambling casinos were allowed to be in the “Meadowlands” that will now include Liberty State Park.  Sadly, new mayor Steven Fulop is all for a new casino in Jersey City.  The problem is that the public may lose the most popular park in the state of New Jersey (and the most iconic Park worldwide) to developers tied to the gambling industry. At a time when our own Governor Christie is schmoozing folks like Sheldon Adelson for $$upport for a possible 2016 run. Times are bad for the public trust when construction money, casino money and campaign money flow like this.

The attempt to lump our crown jewel of state parks, the most heavily used state park in NJ, enjoyed by both NJ and Manhattan residents, with the Meadowlands has not escaped notice of the press.  However, it reminds me of the accusation that may trip up Christie, the SEC charge that Christie’s Administration lied to bond holders about the Pulaski Skyway being an approach to the Lincoln Tunnel so Port Authority funds could be illegally used to fix it.

At the same time as this devious plan for Liberty State Park, Christie wants to get rid of overnight Path train service to Hoboken and Jersey City.  Which makes absolutely no sense unless you look at it as political payback, ala Bridgegate, to two Mayors Christie’s people were openly trying to make miserable.  Christie worrying about $10 million dollars for Path service is absurd when you consider he spent $24 million on unnecessary special elections just to avoid being on the same ticket with Cory Booker and over $7 million of public money on his Bridgegate whitewash report. In other words, Christie alone just cost the public three times what yearly PATH service would cost.

The Port Authority is to serve the people. It is not a pile of money, like pensions or the ARC tunnel funds, or the soon to be sold Port Authority Real Estate holdings to raid, for when the Governor needs to avoid the label of being a tax raiser.  This latest news of a land grab at Liberty State Park is causing some jaded political watchers in NJ to ask if perhaps Christie wants to get rid of overnight train service to Jersey City and Hoboken, which has created vibrant lively cities across from Manhattan, “The City That Never Sleeps”, so that the real estate values will come down enough for his friend David Samson to pick up some more property cheap.  Then perhaps Gov. Christie can reinstate overnight PATH train service, and look like a hero, as he did with the toll hikes, while his friends’ (and his brother’s) new real estate investments, including perhaps some of Liberty State Park, value skyrockets again.

On the Waterfront indeed.