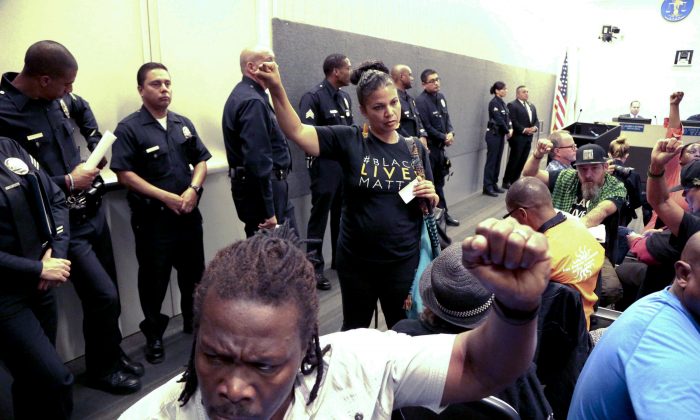 Black Lives Matter protesters demonstrate inside the board of Police Commissioners meeting in Los Angeles on Oct. 4, 2016. Police released surveillance video showing an 18-year-old black suspect running from police while holding what appears to be a gun in his left hand just before he was fatally shot by officers in a death that has generated protests. (AP Photo/Nick Ut)
Viewpoints

On the Injustice of Social Justice

A recent “implicit bias” training in New York City is under fire for promoting racism under the guise of fighting racism, and for pushing for discrimination under the banner of “racial equality.” According to The New York Post, teachers at the event were told to favor black students over white students, regardless of poverty levels.

People who joined the training to fight “racism” allegedly even scolded and humiliated a Jewish woman for telling a story about how her family survived the Holocaust under Hitler’s National Socialists (Nazis). She told her story as an analogy of how dangerous it is to exclude certain students because of the color of their skin. In response, according to the Post, she said: “I was verbally attacked by a black superintendent in front of my colleagues. She said ‘This is not about being Jewish! It’s about black and brown boys of color only. You better check yourself.'”

“I was traumatized,” the Jewish woman said, according to the Post. “It was like 1939 all over again. I couldn’t believe this could happen to me in NYC!”

Of course, incidents like this could be written off as just your run-of-the-mill personal conflict, were it not for the fact that in New York City, the Bill de Blasio’s administration has been creating social programs based on this same form of racial discrimination.

Under the banner of racial justice, for example, Mayor de Blasio is pushing for a new school program, which focuses on equality of outcome, rather than equality of opportunity—meaning that people are forced into the same outcome, regardless of how much work they put in.

It’s a system that teaches people to practice what they claim to oppose—and to hate anyone who questions them.

Unfortunately, the people who follow socialist ideologies usually can’t see the hypocrisy in their own talking points. The Jewish teacher who was attacked in front of her colleagues experienced a moment of hate in the name of social progress.

Hatred and discrimination are central parts of socialism. The system cannot exist without inciting hatred among the masses, since hatred is used to frame its various talking points, and these talking points drive forward the socialist policies of “class struggle.”

People who follow its system are told they are justified to hate certain groups of people—to the detriment of civilization over the last century. Through encouraging hatred, socialist regimes have repeatedly driven people to commit genocide. This includes the Holocaust under Hitler’s National Socialists, Lenin’s programs to kill the “kulak” wealthy farmers, Mao’s programs to kill landlords and “rightists,” and similar genocides.

The “justice” that socialists speak of is actually an inversion of justice. This goes back to its roots in communist thought.

And rather than redefine the values of freedom and justice, or attempt to create new concepts of them, Marx and Engels state that communism seeks to abolish these values altogether—in addition to destroying “all religion, and all morality.”

Socialism is merely the engine to achieve this. During the time of Marx and Engels, there were not yet any socialist or communist governments, and the socialist and communist movements were synonymous with each other. Socialism was just seen as the totalitarian system used to achieve the goals of communism—the desolation of morality, belief, and traditional culture.

Socialism was what Marx called “the dictatorship of the proletariat,” and what Lenin called the “state capitalist monopoly.” The idea of socialism was to create a totalitarian regime, which seizes from common people the ability to engage in free trade, and instead places these powers solely under the state.