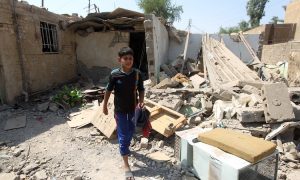 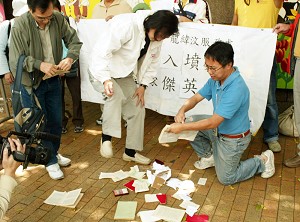 HONG KONG – On the eve of Qing Ming Festival, civil organizations, included among them the Southern Democratic Alliance, gathered to pay homage to those who had died due to persecution under the Chinese Communist Party (CCP)’s dictatorial rule. They met outside the Western District Police Station behind the Liaison Office of the Central People’s Government in Hong Kong. During the event they destroyed a batch of articles relating to the Chinese Communist Party, including but not limited to books, VCDs, CCP emblems, stamps in commemoration of the Great Cultural Revolution, and coins.

Among those in attendance at the April 4th gathering were Mr. Long Weiwen, Chairman of the Southern Democratic Alliance; Mr. Gu Siyao, member of the Action Committee for Defending the Diaoyu Islands; and Mr. Wu Guoxiong, member of the Justice and Peace Commission of the Catholic Diocese in Hong Kong. In preparation, Gu Siyao spent two hours making an emblem of the CCP on a wooden board. Originally Long Weiwen had wanted to burn articles related to the CCP, but for security reasons he ultimately decided to smash and step on them instead.

Throughout the event they chanted slogans such as “Send the CCP to the grave so as to comfort the souls of those persecuted.” After observing a one-minute silence to express their condolences to those who were persecuted to death by the Chinese Communist regime, they tore up “Quotations from Chairman Mao” and stamps of Mao Zedong, to show their determination in breaking off with the CCP.

As to why they chose to destroy CCP paraphernalia, Gu Siyao told the reporter that it makes sense to condemn the CCP with whatever means possible because of the public’s tremendous indignation toward the CCP and the blood debt it owes the Chinese people. He described the nature of the CCP as “cruel, brutal and ruthless.” He also believed that the CCP has caused far-reaching harm to the entire world. He further added that the CCP operates under five major secrets- secret detention, secret arrest, secret interrogation, secret sentencing and secret execution. He reminded Chinese people not to have any illusion about the Chinese Communist regime.

Wu Guoxiong indicated that the CCP is the biggest obstacle to the development of Mainland China. Since the Chinese Communist regime was first established, it has engaged in brutal persecution of its own people. A part of the Chinese people worry about what will happen in China after the CCP collapses, but his reply is to look at the 5,000 years of glorious Chinese Civilization before the CCP.

Mr. Liu Baokun, a candidate for the legislative election last year, said that the Chinese Communist regime’s political and economic policies are simply making a fool of its own people.

Another female resident pointed out that while some people might think you can earn some extra money turning in CCP paraphernalia, she firmly believed that the CCP was going to collapse, and people would fully recognize the evil nature of the CCP and the role it has played in history. She also said that all articles relating to the CCP- such as books, portraits, sculptures, flags, and emblems, should be destroyed as soon as possible.